NOAA awards Norwegian Encore and others with letters of commendation for 2022. 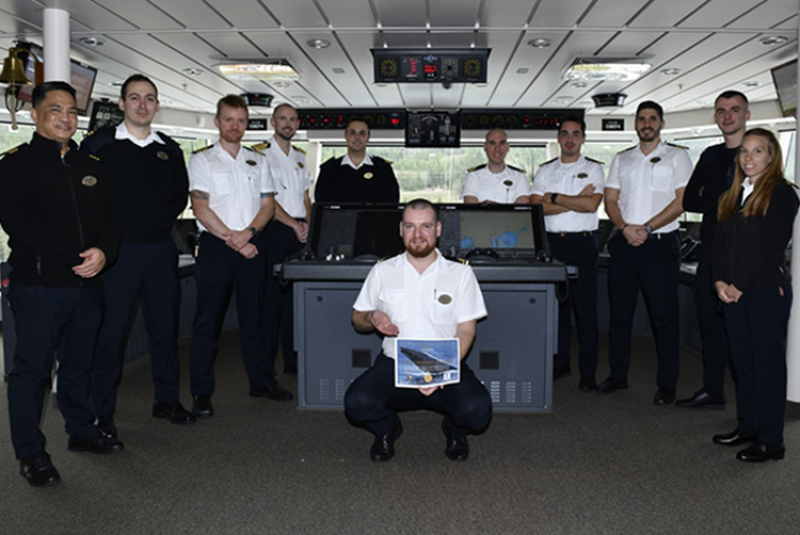 NOAA Fisheries Alaska Region and Glacier Bay National Park and Preserve issued awards to the top three cruise ships reporting the most sightings through the Whale Alert Alaska Program for 2022. The whale sighting network helps professional mariners aboard large vessels to keep one another informed of whale sightings to reduce the risk of whale-ship collisions.

Top honors go to the Norwegian Encore for reporting 280 whale sightings. The Queen Elizabeth submitted the second highest number with 192 sightings, followed by the Nieuw Amsterdam with 76. The pandemic lockdown hampered tourism and reporting in 2020 and 2021, but this year alone, reports from ships, marine pilots, and others totaled 927. First Navigation Officer Bodgen Ciordas of the Norwegian Encore and Lauren Peach, whale lookout on the Queen Elizabeth, were both specifically named for their valuable contributions to the Whale Alert Alaska Network this past season. The sighting network began in 2016, but this is the first time that top contributors have received commendations. 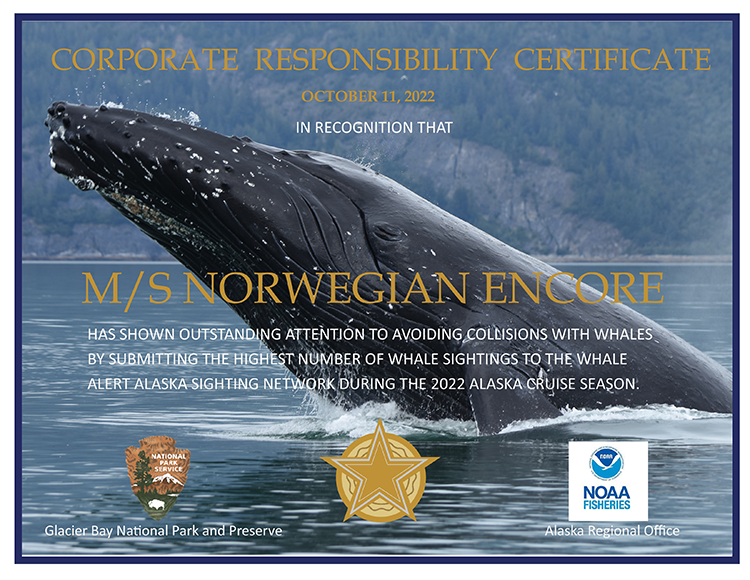 The Whale Alert Program began in 2012 as a free app developed by NOAA’s Stellwagen Bank National Marine Sanctuary. It alerts mariners to the presence of right whales and displays reduced speed zones and whale management areas on the Atlantic Coast. The goal of the citizen science tool is to reduce the risk of vessel strikes on whales. Information submitted by the public to Whale Alert has helped establish speed zones and influence other policies to reduce risks to whales and mariners.

In 2011, Glacier Bay National Park biologists and three Holland America ships created the Alaska network. They began marking whale sightings on paper maps that were distributed weekly by email by Cruise Line Agencies of Alaska, to all Southeast Alaska cruise ships and marine pilots. In the early years, Captain Peter Bos was a key player in generating interest from cruise ship bridge teams. Later, a number of other cruise lines joined the effort, with coordination assistance from Kirby Day of the Holland America Group.

To provide more timely information to ships, in 2016, NOAA Fisheries Alaska Region and Glacier Bay National Park and Preserve adopted the Whale Alert Program for Southeast Alaska. For the first time, mariners could report or view whale sightings any time rather than waiting for a weekly map to arrive by email. The app provides cruise ship bridge teams, marine pilots, and state ferries access to real-time data to be on the lookout to avoid collisions. This could include posting more lookouts, reducing speed, and/or altering course to steer clear of whale aggregations. Instead of providing sightings so vessels can approach whales, the network enables ships to avoid them.

“Preventing whale strikes is a vital part of taking care of these magnificent animals that are so important to all of us,” states Chris Gabriele with the National Park Service, a biologist who helped develop Whale Alert Alaska. “The humpback whale population in Southeast Alaska has been struggling since the ‘Blob’  marine heatwave in 2014–2016, and they can use all the help they can get.”

"We are grateful to our partners in the maritime and tourism industry for making Whale Alert such a success in Alaska," says Carley Lowe, Marine Mammal Specialist for NOAA's Protected Resources Division in Alaska who helps run the program for Alaskan waters. "Their ongoing commitment and active participation in this effort over the years has provided a collaborative and tangible means to protect whales from ship strikes."

The future of the Whale Alert Alaska Program is promising for bridging citizen science and whale management. Members of the public, including crews on smaller vessels, are encouraged to use the Whale Alert mobile app to report sightings that will be visible to large vessel bridge teams. In the coming years, Whale Alert Alaska Program may be expanded to other locations in Alaska, creating a larger network of responsible vessels and citizen science sightings. An effort is also underway to connect Whale Alert sightings with shipboard electronic navigational systems so that sightings are visible on the bridge in real-time. The technology will continue to improve, but the sighting network will always rely on the enthusiasm and diligence of the individual network members, like the top three contributors recognized here, putting whales on the map for the benefit of all. 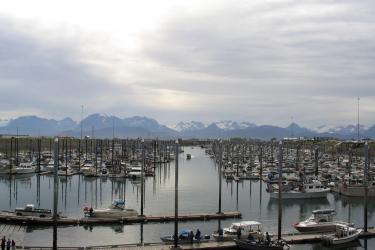