Whales can be very hard to find in Earth’s vast seas. NOAA Fisheries’ scientists and partners use a range of technologies and research techniques to locate whales and study their behavior. Some of these techniques are new and exploratory while others are tried and tested, but all are providing important data on protected whale species. Check out some of the ways we’re watching for whales below. 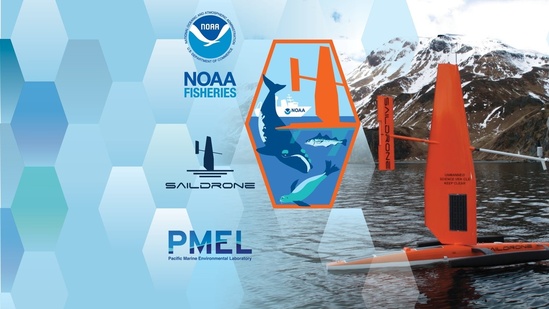 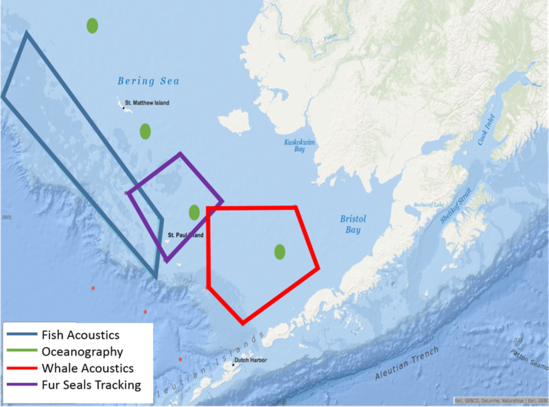 “This past summer, the Alaska Fisheries Science Center’s National Marine Mammal Laboratory had the opportunity to collaborate with scientists on the 2016 Saildrone mission. Saildrones are a relatively new, autonomous technology that can stay out at sea for months, collecting continuous data that would otherwise be prohibitively expensive to gather through traditional methods.

Our interest in the project was to determine if the Saildrone would be a suitable platform for passive acoustic monitoring of marine mammals, in particular the critically endangered North Pacific right whale. We attached a small, autonomous acoustic recorder called the Acousonde to the keel of each Saildrone, and set it to record continuously up to 4 kHz, which covers the frequency band of most marine mammals in the Bering Sea.

The Saildrone has the advantage of covering a large area, while being able to stay out for months at a time, making it much more cost-efficient than a full-scale vessel survey. It also has the added benefit of being integrated with oceanographic and lower trophic instrumentation, allowing for the correlation of marine mammal data with oceanographic and prey variables.

Preliminary results from the passive acoustic data show some success in detecting higher frequency species like killer whales. There was masking of lower frequency signals due to water hitting the platform, which was not unexpected.

However, with planned modifications to reduce noise, and an increased sampling rate to include more high-frequency species (e.g., beaked whales), the incorporation of passive acoustics onto the Saildrone has great potential for monitoring large areas for the presence of vocalizing marine mammals.”

Watch our broadcast of the 2016 Saildrone mission launch to learn more about the Saildrone program and how NOAA Fisheries scientists are utilizing the technology to study more than just whales. 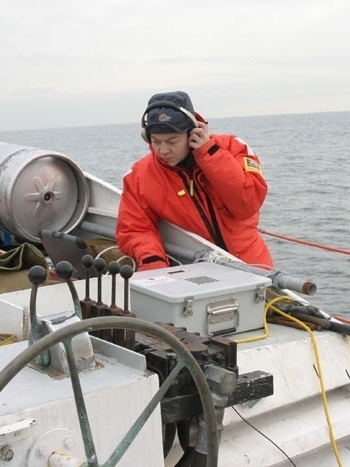 “In the Northeast Region, we have a network of passive acoustic recorders and autonomous gliders recording the presence of large whales from the shore to the shelf break, using archival recorders as well as in real time with our colleagues from Woods Hole Oceanographic Institution (WHOI) and Scripps Institution of Oceanography.

Passive acoustics allows us to record 24/7 in all weather conditions, so it is able to provide a continuous and long-term time series of how whales used different habitats and how their occupancy of these areas may be changing. Visual survey techniques are hampered by weather conditions and night time, but are essential because the photographs they take allow us to identify individuals and their health status. Combined together these techniques give a more complete picture of this species.

The long-term records of whale presence are enabling us to better understand changes in their distribution and behavior. Real-time detection using both autonomous gliders and stationary buoys is proving invaluable for mitigating human impacts and monitoring endangered species.

The next steps are to ensure that these technologies can be integrated into our standard monitoring protocols so their value can increase the efficiency of data collection for these species. Autonomous gliders are now able to go farther afield and explore areas that neither vessels nor planes can easily access, and can therefore provide information on unknown regions and evaluate whether species distributions are truly shifting.”

Learn more about passive acoustic research being done out of the Northeast Fisheries Science Center. 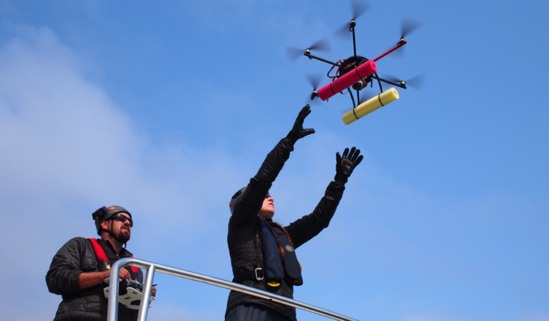 “Unmanned aerial systems are changing the way we make observations of whale health. We can’t put a live whale on a scale to check its body condition, but now we can use small UAS platforms to give them a checkup without any disturbance.

We have been flying a small hexacopter to hover 100 to 200 feet above whales to take overhead photographs: from these we can do photogrammetry (taking measurements from photographs) to monitor growth, assess body condition, and identify pregnancies. These metrics allow us to augment traditional stock assessments to not only focus on abundance trends of whales, but to also understand the underlying causes of population dynamics.

We are also flying our hexacopter through the exhaled blow of large whales to collect samples from which we can describe respiratory microorganisms and identify emerging diseases.

To date, we have flown more than 1,200 flights over more than a dozen species of whales and dolphins. The images and samples we are collecting are now forming the basis for key monitoring programs that can identify changes in whale health and population status over time to better inform management decisions aimed at recovering and sustaining protected whale populations.”

Durban and his colleague, Holly Fearnbach, are currently in Antarctica aboard the National Geographic Explorer. Learn more about their research in this video short from CBS News. 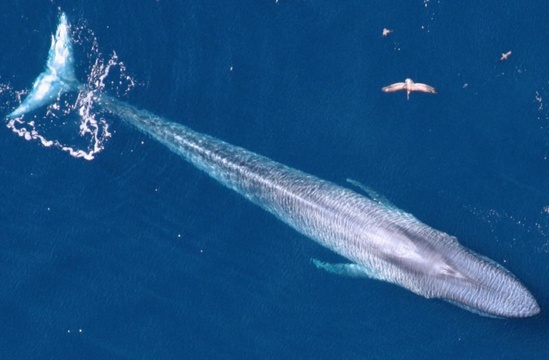 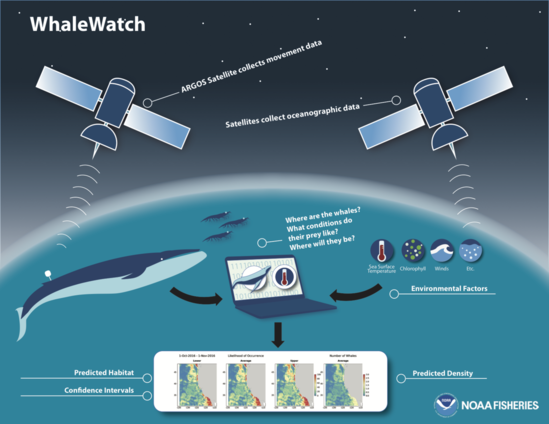 “Scientists have been using satellite tags to track blue whales along the West Coast since the early 1990s, learning how the largest animals on the planet find enough small krill to feed on to support their enormous size.

A collaboration of researchers from NOAA Fisheries, Oregon State University, and the University of Maryland have combined the wealth of tracking data with satellite observations of ocean conditions to develop the first system for predicting location and density of blue whales off the West Coast. The system, called WhaleWatch, produces monthly maps of blue whale “hotspots” to alert ships where there may be an increased risk of encountering these endangered whales.

This research provides a year-round predictive model. Most other models are confined to times when ships surveyed. Instead, this tool uses many years of tag data to let the whales tell us where they go, and what conditions drive aggregation and migration. WhaleWatch is an innovative combination of novel satellite technology and computer modeling approaches that can provide timely information to West Coast managers and the shipping industry. NASA also helped fund the project, which draws on ocean observations from both NASA and NOAA satellites.

Future planned developments of WhaleWatch would include more species as tag data become available, and ensemble models that combine multiple data types to provide a more complete view of whale habitat on the West Coast.”

Learn more about WhaleWatch and how it can be used to predict and protect blue whale "hotspots." 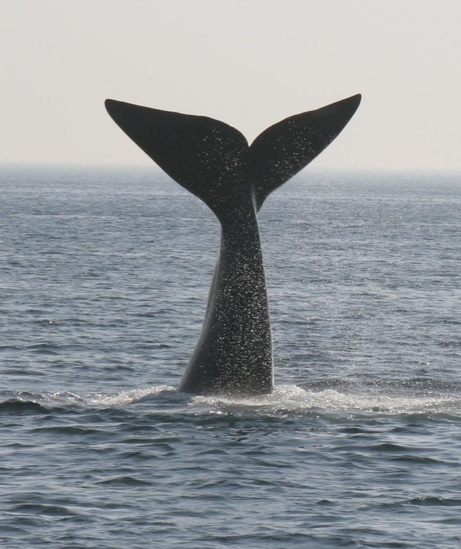 “Whereas WhaleWatch uses tagging data to predict whale distributions for use in dynamic management, my research uses data from NOAA surveys to make predictions about long-term areas of higher and lower whale population densities. This information has proven critical in addressing the emerging problem of ships striking blue whales, and has informed the management of ship traffic to and from the busy ports of Los Angeles and Long Beach to mitigate this problem.

My most recent project used blue whale data from well-surveyed areas off the U.S. West Coast and in the eastern tropical Pacific Ocean to build blue whale habitat models.  The models identify areas of upwelling and underwater topography that concentrate krill. The models were used to predict similar upwelling and feeding regions in the northern Indian Ocean that are likely to be important habitat for the endangered species.

Marine mammals face threats from human activities in most of the world’s oceans, but we lack the data needed to address these threats in many areas. The data collected aboard our surveys allow us to predict species habitat in other parts of the world.  Understanding species habitat allows us to address conservation problems that are often unexpected and critical to maintaining healthy populations.” 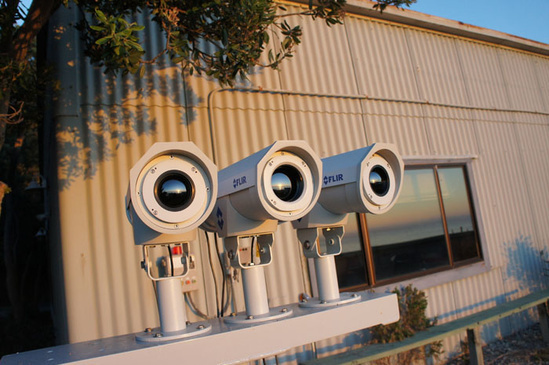 “Long-wave infrared video and software systems are being used off Central California to count eastern North Pacific gray whales during their southbound migration.

This system consists of: (1) three infrared cameras that monitor a fixed swath of the gray whale migration corridor 24 hours a day, (2) automated detection software for detecting whale blows, (3) whale-blow verification software for reviewing and removing false alarms, and (4) counting software that estimates the number of whales that have passed by the observation station.

A preliminary side-by-side comparison showed that the results of this infrared camera system compared favorably to results of a team of experienced NOAA visual observers. Benefits of this system include the ability to autonomously collect continuous data over long time windows (months), including periods of darkness when human observers are unable to work.

The use of this technology has other potential applications, such as mitigation of ship strikes and disturbance from underwater noise.”

Learn more about the infrared camera systems being used on the West Coast.

These thermal signatures are depicted in white so they stand out from the colder, surrounding waters (depicted in black). Birds, dolphins, and gray whales can all be seen in this video clip.