Scientists from the NOAA Chesapeake Bay Office are investigating whether fish are using restored areas at Maryland’s Poplar Island. 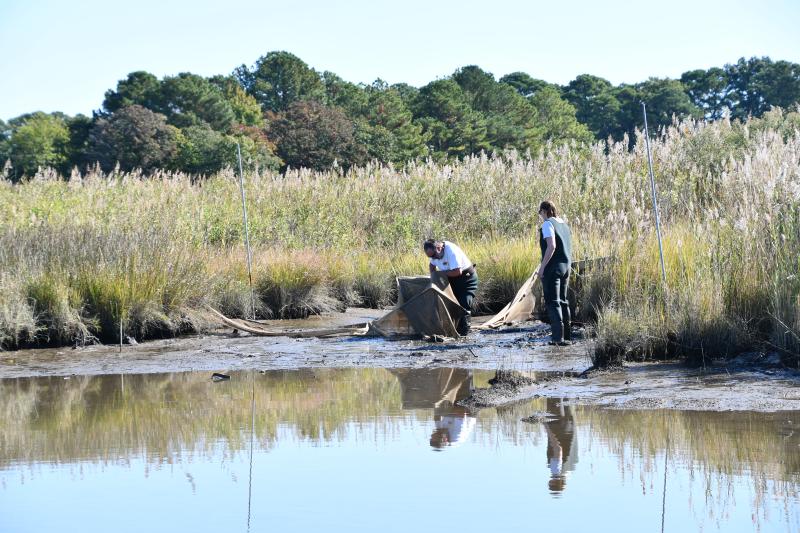 Scientists at the NOAA Chesapeake Bay Office are monitoring fish at the Paul S. Sarbanes Ecosystem Restoration Project at Poplar Island. They plan to conduct field work three times each year (generally, in April, July, and October). They’ll keep tabs on how different species of fish may be using habitat in and around Poplar Island. They are seeing indications that restored marsh areas may be providing nursery habitat for some species.

How to Restore an Entire Island

The U.S. Army Corps of Engineers, Maryland’s Port Administration, and other agencies recognized that the loss of Poplar Island meant the loss of remote island habitat. At the same time, they realized that material dredged from the shipping channels leading into Baltimore Harbor needed to go somewhere. The result? A win-win situation.

Rebuilding Poplar Island is a massive construction project, under way since the mid-1990s. The project, still in progress, uses material dredged from the shipping channels into Baltimore Harbor to restore lost island habitat. As the project progresses, new “cells” are created to receive the dredged material. Each cell is created to include features like creeks, high marsh, low marsh, and upland areas, in order to provide healthy habitat for Bay species. As we face a changing climate, restored habitat such as this becomes even more important to support healthy fish populations.

Tracking Fish Use of Restored and Reference Areas

Fish use habitat 24 hours a day, so the field work to determine which fish use which areas goes on 24 hours a day, too. Each restored marsh cell is monitored for 5 years. Monitoring is currently under way in three of the completed cells at Poplar Island (three sites in each of the three cells). Sampling also takes place at three reference sites on the mainland near Tilghman Island. The reference sites were selected to get an idea of how fish might have used areas on Poplar Island before it eroded.

In each location, the team deploys both fyke nets and gill nets. Fyke nets are set against a marshy edge at high tide and retrieved at low tide. Scientists record the species caught, how many of each kind of fish, and how big they are. The gill nets are used in marsh channels and ponds, and are fished overnight for 12 to 14 hours. Fish caught in the gill nets are also tracked for species, number, and length.

As the team conducts this sampling work over time, they will be able to track trends in how different species use the different areas.

In general, the reference sites caught a greater variety of species than did the recently restored areas. In analyzing the data, the scientists noticed that more juvenile spot (1–2 inches long) were collected in the restored marshes than at the reference sites. This may indicate that the marsh cells on Poplar Island can provide significant nursery habitat for this species.

Monitoring will continue to track the health of newly restored habitat at Poplar Island, and to learn more about how fish species are using these areas. Some of this work will include using acoustic telemetry to track tagged fish. This is similar to work we do in other parts of the Chesapeake Bay. We look forward to learning more about how fish use this newly restored habitat.