Restoration of nearly 40 acres of salt marsh and other coastal habitats will help Great Meadows Marsh in Long Island Sound respond to sea level rise. The effort is supported by funding from three pollution cases in Connecticut. 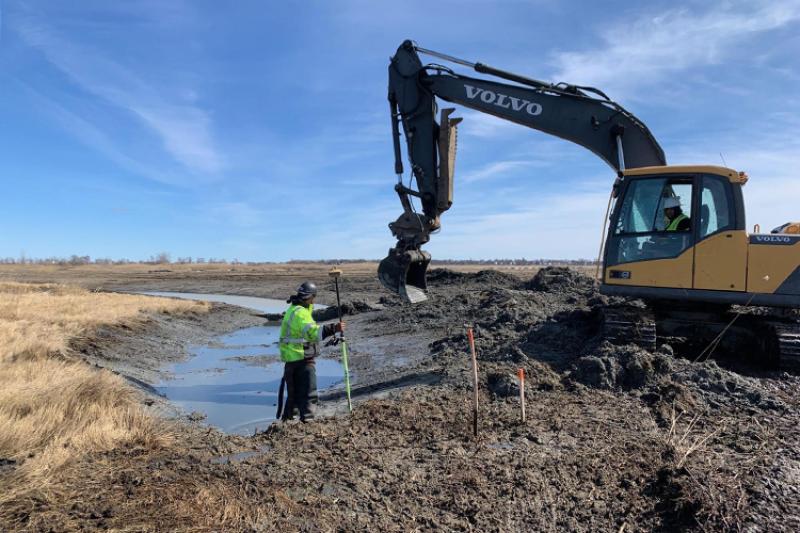 Funding recovered from three pollution cases is supporting restoration of nearly 40 acres of salt marsh and other coastal habitats at Great Meadows Marsh. The marsh is located in the Stewart B. McKinney National Wildlife Refuge in Stratford, Connecticut. Through this effort, NOAA and partners are strengthening the climate resilience of this important coastal ecosystem.

Great Meadows Marsh lies immediately west of where the Housatonic River meets with Long Island Sound. Most other salt marshes in Connecticut, as well as many marshes along the Atlantic coast, were historically ditched to eliminate disease-carrying mosquitoes. Great Meadows Marsh, however, is home to the largest remaining expanse of unditched salt marsh in Connecticut. The unditched condition of this marsh provides a healthier and more functional habitat overall.

Salt marshes provide habitat for fish and wildlife, trap pollution, and reduce damage from storms and flooding—important benefits  for local communities. The Great Meadows Marsh restoration effort will provide important habitat for fish, including spawning and nursery habitat for forage fish like Atlantic silverside, mummichog, and Atlantic menhaden. It will also help build the ecological resilience of the marsh to respond to increasing sea level rise.

As part of the restoration effort, NOAA and partners are excavating soils from the site and placing them in areas of the marsh that are currently too low in elevation and degrading. Partners are also constructing tidal channels, removing invasive plants, and planting native marsh vegetation. Combined, these efforts will increase salt marsh area, elevation, and function, helping to build a more climate-resilient marsh. Monitoring by the University of Connecticut is underway to help partners keep track of how well the project works. It will help them determine whether changes may be needed to further improve the health and functioning of the marsh.

Through our Damage Assessment, Remediation, and Restoration Program, NOAA protects and restores natural resources harmed by oil spills, releases of hazardous waste, and vessel groundings. We work alongside state, tribal, and federal agencies—called Trustees—to assess damages to resources, hold the responsible parties accountable, and restore the natural resources. The restoration at Great Meadows Marsh is supported through funding recovered from three pollution cases:

Although different natural resource damage cases, the three contamination sites were close to one another and resulted in injuries to similar natural resources, so the Trustees focused on restoration as one large project and at a single location. This combined restoration leveraged case funds, supplemented by other grant funds, to implement a larger, more impactful project than if the restoration activities were completed separately.

As the lead Trustee, NOAA led the preparation and completion of the restoration plan approving the projects in 2019, as well as overseeing the design and permitting. We've led restoration planning for the Lordship Point Gun Club and Raymark Industries cases since 2005. In addition, we secured supplemental funds from the Housatonic River Trustee Council through a 2013 funding decision.

NOAA fostered a strong public-private partnership for this restoration effort. We have worked collaboratively alongside Audubon Connecticut, the U.S. Fish and Wildlife Service, and the State of Connecticut Department of Energy and Environmental Protection. We assisted Audubon Connecticut in preparing grant applications to leverage settlement funds. We also successfully secured an additional $3 million in grants for scaling up the construction and providing construction oversight. Supplemental funding from USFWS is also supporting construction and monitoring of the project.

Last updated by Office of Habitat Conservation on June 02, 2022