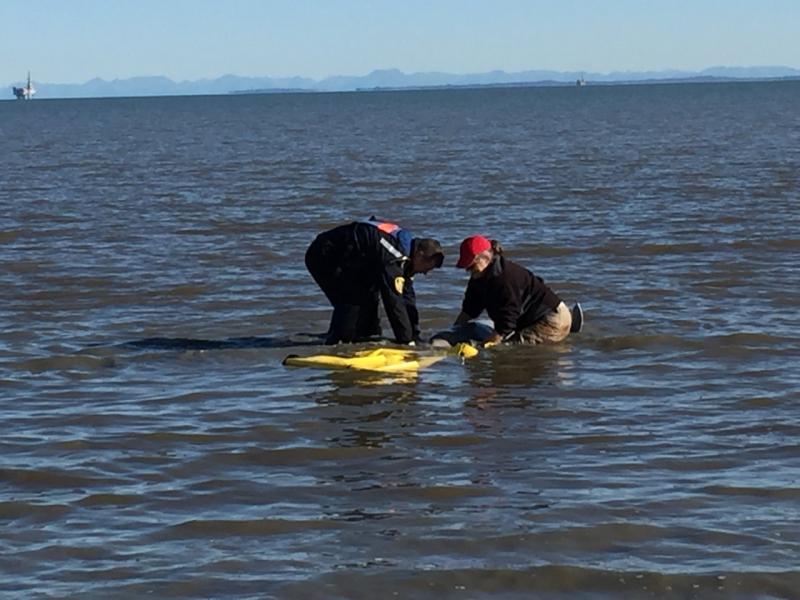 NOAA Enforcement Officer Noah Meisenheimer was flying back to Anchorage on-board an Alaska Wildlife Troopers Department of Public Safety helicopter when something caught his eye. On the west side of the Cook Inlet, he observed a highly endangered Cook Inlet beluga whale calf stranded in the surf on a remote beach.

“I knew when I saw him that we had to do something,” said Meisenheimer, whose mission includes safeguarding and caring for marine wildlife. 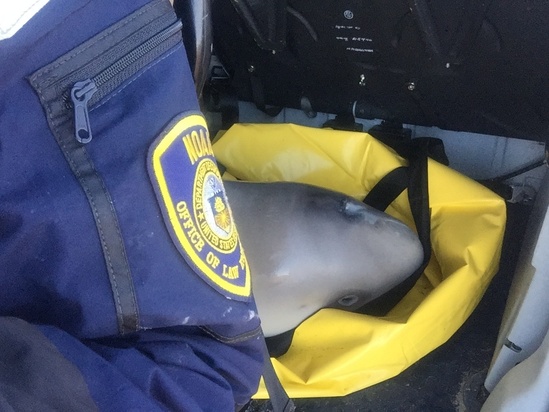 Photo by Enforcement Officer Noah Meisenheimer
Under authorization by the NOAA Fisheries MMPA/ESA permit #18786-01, issued to the stranding response program, a team of experts rescued a beluga whale.

As they circled the area, Meisenheimer and pilot Kenneth Reiser looked for other belugas and confirmed that the calf appeared to be abandoned. After setting down the chopper, they called the sighting in to the NOAA Fisheries Protected Resources Division (PRD).

After receiving authorization from permitted experts with the PRD Marine Mammal Health and Stranding Response Program, Meisenheimer and Reiser attempted to encourage the animal to move into deeper water.

“He would swim on his own for a little while, but kept turning around to swim back to shore,” said Meisenheimer. “I knew something had to be wrong with him. And since we were in constant contact with PRD, we informed them that another course of action was needed to rescue the calf.”

While Meisenheimer remained near the whale, Reiser flew the helicopter to pick up an Alaska SeaLife Center veterinarian who was working in the area. The vet evaluated the beluga calf and determined it would not survive on its own, but was healthy enough for rescue and rehabilitation efforts.

Together, the on-site team reconfigured the rear passenger area in the aircraft to safely fit the beluga calf and the veterinarian.

“We used a body bag as a sling,” said Meisenheimer. “We slowly and very carefully maneuvered the bag under the beluga and then placed him in the helicopter.” 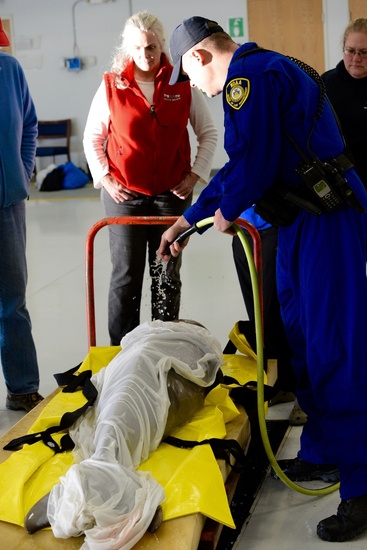 Photo by Alaska SeaLife Center
NOAA Enforcement Officer Noah Meisenheimer waters the beluga as they stand by for the transport to the Alaska SeaLife Center in Seward, Alaska. All activities in this rescue were authorized under the NOAA Fisheries MMPA/ESA permit #18786-01.

The team quickly arrived at the hangar in Anchorage, where they met specialists from the Stranding Response Program. The response team coordinated a vehicle to pick up the beluga calf and transport him to the Alaska SeaLife Center in Seward for treatment and rehabilitation.

“It was definitely a team effort,” he said. “We all played an integral role—NOAA’s Office of Law Enforcement, NOAA Fisheries Protected Resources Division, Alaska Wildlife Troopers Aviation Section, and Alaska SeaLife Center. We are truly ‘one team’ and this is a great example of how we work together to protect marine wildlife.”

Enforcement Officer Meisenheimer was in a unique position and he initiated a team effort that gave the baby beluga a fighting chance. It was the kind of moment that makes us proud to be a part the NOAA team.”

Cook Inlet beluga whales are protected by the federal Marine Mammal Protection Act (MMPA) and Endangered Species Act (ESA). Under these mandates, people must maintain a distance from whales of 100 yards on water or land and 1,500 feet in the air. It is illegal to touch, feed, harass, chase, or harm beluga whales.

About the Beluga Whale

Five distinct population segments of beluga whales exist in the oceans off the coast of Alaska: Beaufort Sea, Bristol Bay, Cook Inlet, Eastern Bering Sea, and Eastern Chukchi Sea stocks. Of these, only the Cook Inlet beluga whale is listed as endangered under the ESA.

Cook Inlet belugas once were a valuable part of the regional Alaska Native subsistence diet, but the population has declined rapidly. This rapid decline was most likely due to unregulated subsistence harvest at a level that this small population could not sustain. The hunt has been suspended since 2005, but unfortunately, the whale population has not recovered as expected.

NOAA Fisheries designated the Cook Inlet beluga whale population as depleted under the MMPA in 2000, and listed these belugas as an endangered species under the ESA in 2008. The rapid decline and dire status of the Cook Inlet beluga whale population makes it a priority to focus efforts within NOAA Fisheries and with our partners to stabilize and prevent extinction of this iconic species.

In 2015, NOAA Fisheries began a concerted agency-wide effort to spotlight and save these highly at-risk species. The “Species in the Spotlight: Survive to Thrive” initiative identified the endangered Cook Inlet beluga whale as one of the eight highlighted species. The initiative includes targeted efforts vital for stabilizing populations and preventing extinction of the identified species.

The endangered Cook Inlet beluga whale was chosen as one of the eight most at-risk species because this declining population of small whales shares Cook Inlet with Alaska’s human population center, transportation hub, and largest concentration of industrial activity. The population has declined by nearly 75 percent since 1979, from about 1,300 whales to an estimated 328 whales in 2016.

For more information about the beluga whale and the Species in the Spotlight initiative, read the priority actions plan.

Story by Ally Rogers, communications officer for NOAA’s Office of Law Enforcement. To contact her, please call 301-427-8255 or email allyson.rogers@noaa.gov.

Last updated by Office of Law Enforcement on August 07, 2018