These top predators travel far across the Pacific, returning to the same areas in the Southern California Bight each year. 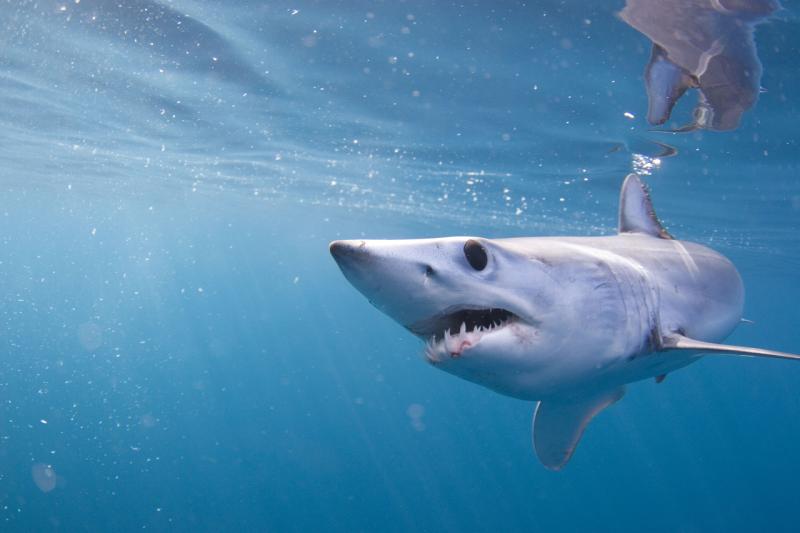 The largest effort ever to tag and track shortfin mako sharks off the West Coast has found that they can travel nearly 12,000 miles in a year. The sharks range far offshore, but regularly return to productive waters off Southern California, an important feeding and nursery area for the species.

The findings demonstrate “an impressive show of memory and navigation.” The sharks maneuver through thousands of miles of the Pacific but return to where they have found food in years past, said Heidi Dewar, a research fisheries biologist at NOAA Fisheries’ Southwest Fisheries Science Center in La Jolla, California.

Researchers tagged 105 mako sharks over 12 years—from 2002 to 2014. The tags record the sharks’ movements, as well as the environments the sharks pass through. Researchers have long recognized that ocean waters from Santa Barbara south to San Diego, known as the Southern California Bight, are an important habitat for mako sharks. Prior to this study, however, they knew little about what the sharks do and where they went beyond those waters.

The researchers are from NOAA Fisheries, Stanford University, Tagging of Pacific Predators, and the Center for Scientific Research and Higher Education in Baja California. They reported their results in the journal Animal Biotelemetry.

“We did not know what their overall range was. Were there patterns that they followed?” asked Nicole Nasby-Lucas, a NOAA Fisheries research scientist at the Southwest Fisheries Science Center and lead author of the new research. “It turns out they have their own unique movement patterns.” Sharks tracked over multiple years returned to the same offshore neighborhoods year after year.

The tagging data overall revealed that the sharks travel widely along the West Coast. They venture as far north as Washington, as far south as Baja California, and westward across the Pacific as far as Hawaii. The sharks tagged off California remained on the eastern side of the Pacific east of Hawaii. This indicates that they do not mix much with mako sharks in other parts of the Pacific. 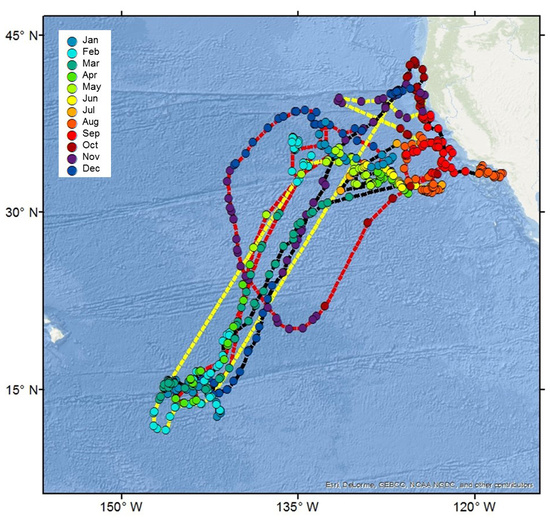 Although there are examples of mako sharks crossing the ocean, it is probably the exception rather than the rule, said Dewar, a coauthor of the new research.

The finding provides insight into population dynamics of mako sharks across the Pacific. It also allows scientists to identify which fisheries the tagged mako sharks might encounter. Muscular mako sharks are a popular sport fishing target. They are also caught in U.S. longline and drift gillnet fisheries and are common in the international trade in shark fins. Mako sharks are overfished in the Atlantic Ocean, but not in the Pacific.

The researchers used two types of tags to track the sharks. One type, called pop-up tags, collect data and eventually pop off the animal and float to the surface, where they transmit their data via satellite. The second type transmits data to satellites each time the shark surfaces, determining the animal’s location by measuring tiny shifts in the frequency of the radio transmission.

Mako sharks are among the fastest swimmers in the ocean, hitting top speeds of more than 40 miles per hour. The larger tagged sharks traveled an average of about 20 miles a day and a maximum of about 90 miles per day. They travel long distances in part because they must swim to move water through their gills so they can breathe, Dewar said.

Large numbers of juvenile sharks caught in the Southern California Bight indicate that it is a nursery area for the species. Tagged mako sharks returned there annually, most typically in summer when the waters are most productive. The tracks of the tagged sharks may look at first like random zig-zags across the ocean, Dewar said. They actually illustrate the sharks searching for food and mates based on what they remember from previous years. 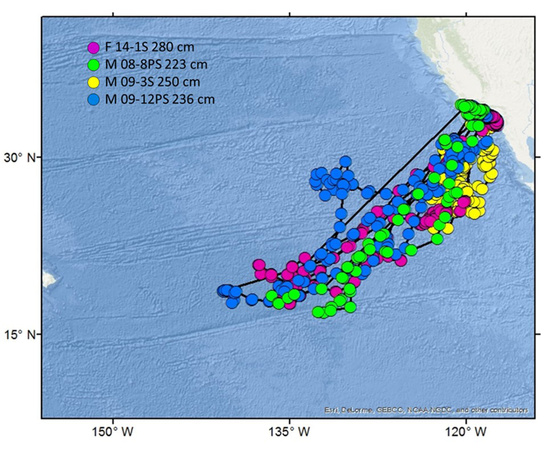 Movements of four large mako sharks, each of which left and then returned to the California Coast. Each shark is indicated by different colored dots marking their locations along the way. (Credit: Animal Biotelemetry).

“If you have some memory of where food should be, it makes sense to go back there,” Dewar said. “The more we look at the data, the more we find that there is a pattern behind their movements.”

The tagging results also provide a wealth of data that scientists can continue to plumb for details of the sharks’ biology and behavior. About 90 percent of the time the sharks remained in the top 160 feet of ocean, for example, occasionally diving as deep as 2,300 feet. Although the sharks traveled widely, they mainly stayed in areas with sea surface temperatures between about 60 and 70 degrees Fahrenheit.

“We can continue to ask new questions of the data to understand these unique movement patterns,” Nasby-Lucas said. “There’s a lot more to learn.”