Andrew Larkin is a Senior Program Analyst for the NOAA Chesapeake Bay Office. Learn more about his work. 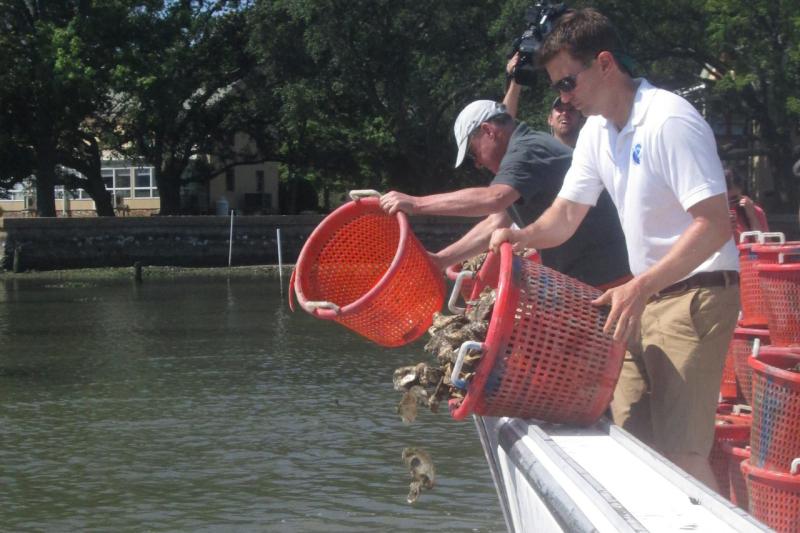 Andrew Larkin works as a Senior Program Analyst for the NOAA Chesapeake Bay Office. This August, he has worked for NOAA for 23 years. While he works for NOAA Fisheries, his office is located at the NOAA Office of Coast Survey Atlantic Hydrographic Branch building in Norfolk, Virginia.

Describe a project related to habitat that you are currently working on.

I currently lead a stakeholder workgroup to complete implementation of an oyster restoration blueprint for the Lynnhaven River in Virginia Beach.

I particularly enjoy being engaged in oyster restoration work in the Lafayette and Lynnhaven rivers, where I can see the projects being implemented in the same waterways of my community that I enjoy visiting and recreating on. These projects are part of a larger goal to restore oyster populations in 10 Chesapeake Bay tributaries by 2025.

Last year I was fishing with my son off a dock in the Lafayette River when he caught a large spot. We were bringing the fish in when the line snapped and the fish fell back into the water, trailing the leader and with the circle hook still in its mouth. I gave my son my rod to fish with while I rigged up his rod again. On his next cast, he caught the same fish, but hooked the leader instead of the fish and brought him in. I carefully removed the hook and leader and released the fish back into the river. I figured he'd earned it.

Last updated by Office of Habitat Conservation on July 08, 2020