A highlight of five of the National Fish Habitat Partnership's 2021 Waters to Watch projects that take place in coastal, estuarine, and marine habitats where NOAA works. 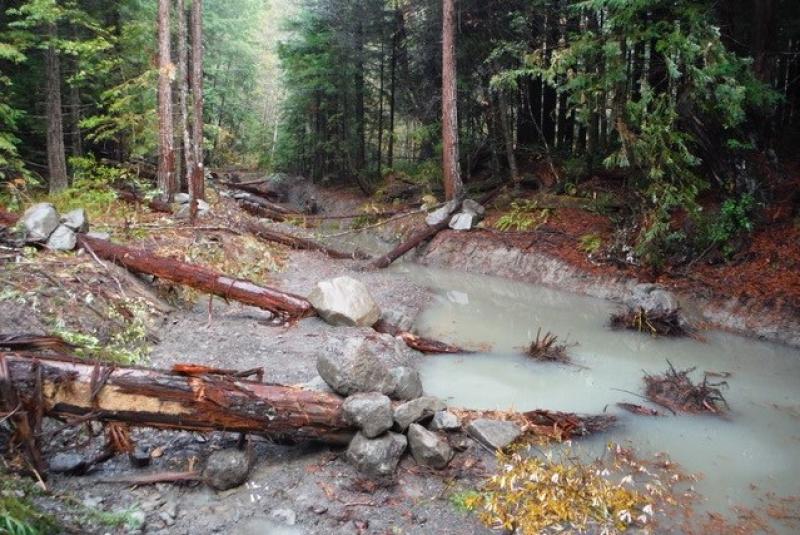 The National Fish Habitat Partnership (NFHP) is a science-based, state-led initiative to protect, restore, and enhance aquatic ecosystems across the United States. NOAA has been a key partner in NFHP since its establishment. This unique national partnership consists of a network of 20 Fish Habitat Partnerships, which focus on improving fish habitat and aquatic communities at regional and local levels. Collectively, they have completed more than 1,000 projects in 50 states. Each year, NFHP hosts the Waters to Watch campaign, which raises the visibility of some of the best on-the-ground aquatic habitat conservation projects implemented by individual FHPs. We are highlighting five coastal, estuarine, and marine projects in the 2021 Waters to Watch campaign that take place in habitats where NOAA works.

This Pacific Lamprey Conservation Initiative project will open up important spawning and rearing habitat for migrating Pacific Lamprey adults. It will improve upstream passage over small dams, a primary threat throughout their range. The six low-head dams targeted for this project include:

Since 2007, an unprecedented four dams have been removed from the Rogue Basin in southern Oregon. This has increased migratory capacity for Pacific Lamprey at all life stages in the region. Existing structures, like the low-head dams remediated as part of this project, continue to impede passage for lamprey in the Applegate watershed. Many of these barriers can be modified at minimal cost to create a curve in the dam’s crest (such that lamprey can suction over). The modifications would not impact water users or the dam’s integrity or structure. These innovative retrofits are low impact, cost-efficient ways to enable adult upstream passage for Pacific Lamprey.

This project, located within the bounds of the Mat-Su Basin Salmon Habitat Partnership, is the most ambitious river restoration project ever attempted in Alaska. The Native Village of Eklutna, Eklutna Inc., and The Conservation Fund completed the 5-year, $7.5 million effort to remove the long-abandoned lower Eklutna River dam. With removal of the dam, salmon can access the 8 miles of river leading to Eklutna Lake for the first time in nearly a century.

The lower Eklutna River dam was built in 1929 as one of Alaska’s first hydroelectric projects. Located in a dramatic 400-foot deep canyon, access to the project site was a severe challenge during the construction and later demolition of the dam. Power ran by wire to Anchorage until the early 1950s when the lower Eklutna River dam was decommissioned and ultimately abandoned. Repeated studies over several decades recommended the removal of the lower Eklutna River dam as an essential first step in restoring the river. Partners are working to bring back a healthy and fully functioning river. Their efforts will ensure fish passage past the upper Eklutna dam and maintain enough water in the river to support five species of salmon and their habitat needs.

In 2019, member groups of the Southeast Alaska Fish Habitat Partnership teamed up to address urban stormwater pollution and support efforts to address water quality impairments. They included instituting protection measures for Jordan Creek in Juneau, Alaska. Jordan Creek provides important habitat for salmon, trout, and char. The team completed a watershed action plan for Lower Jordan Creek in the spring of 2021. The plan identifies sources of pollutants and other stream impairments and recommends site specific actions to address stormwater pollution and river health.

The Eel River watershed, California’s third largest, once boasted one of the state’s most robust salmonid fisheries, including Chinook and Coho Salmon. Lawrence Creek has been identified as a high priority salmon and steelhead stream in the Eel River watershed. A collaborative public-private partnership was formed to initiate a multi-phased project. The goal of the project is to restore and enhance conditions and historic floodplain habitat on Lawrence Creek. Restoring off-channel ponds and side channels provides important shelter for salmon during high flows from winter storm events. The restoration project also includes increasing the habitat diversity in the creek (e.g. adding large pieces of wood) which leads to improved food resources for fish.

For many years, the former mill industry along the Monatiquot River impacted historic herring runs and disconnected species from their spawning grounds. Now, the Armstrong Dam is the primary barrier to fish passage on the river. The dam no longer serves its original purpose and is also a public safety hazard. This project, led by the Town of Braintree, will remove the Armstrong Dam. There is also a concurrent project to remove the downstream Ames Pond Dam and install a fishway around Rock Falls. When these projects are completed, 36 miles of unimpeded upstream access to 180 acres of river herring spawning habitat will be restored.