A well-known jellyfish species turns out to be two, overturning a centuries-old assumption. 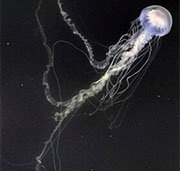 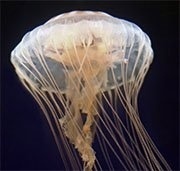 A team of scientists has shown that one of the most common and well-studied jellyfish species along the East Coast and Gulf of Mexico is made up of two species. The sea nettle jellyfish, here pictured in Photos A and B, is well-known to beachgoers and researchers alike. Chances are, if you've been stung by a jellyfish in the Chesapeake Bay, it was by a sea nettle jellyfish. For the last 175 years, scientists assumed there was only a single species. But a new paper published in the journal PeerJ finds that what once was thought to be a single species of jellyfish in

some of the nation's most popular waterways is actually made up of two distantly-related species.

A chance encounter leads to a new discovery

Lead author Dr. Keith Bayha was conducting fieldwork and collecting jellyfish off the coast of Delaware (Cape Henlopen) for an outreach exhibit when he noticed something different about the jellyfish nearby. "They were much bigger than anything I had seen previously," said Bayha. With his curiosity piqued, he decided to take some samples back to the lab. Genetic testing revealed these animals were quite different than those found in the nearby Chesapeake Bay and Rehoboth Bay. He began work on these jellyfish with Dr. Patrick Gaffney at the University of Delaware and Dr. Allen Collins

from the NOAA National Systematics Laboratory, located at the Smithsonian National Museum of Natural History in Washington, D.C. Together they confirmed there were two distinct species–an open ocean-based species (Chrysaora quinquecirrha, "sea nettle") in photo B on the right and a bay-based species (Chrysaora chesapeakei, “bay nettle”) in photo A on the left. The bay-based species is found in the less salty waters known as estuaries, such as the Chesapeake Bay, and is the newly recognized species of the two. Both jellyfish were previously called Chrysaora quinquecirrha. Even more surprising is that this research shows that a jellyfish found in the Chesapeake Bay is more closely related to jellyfish off the coasts of Ireland, Argentina, and Africa than to jellyfish found near Ocean City, Maryland just miles away.

How can you tell the difference between the two species? 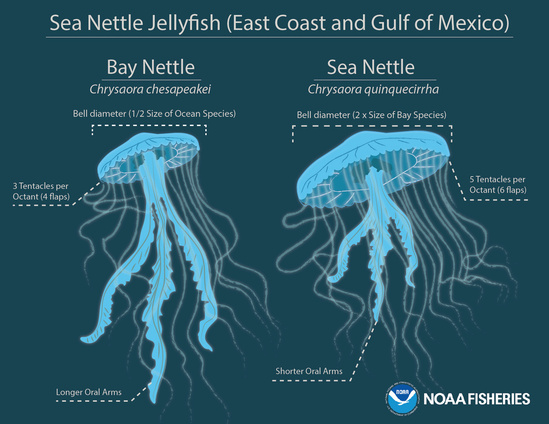 The ocean-based species appears much larger than its bay cousin. Its bell (the rounded top portion of the species) is almost two times as large as the bay-based species. It also has more tentacles (40 compared to 24, although some variation exists). These differences and others are shown in the graphic to the right comparing the two species.

How could such a common species go undetected for so long?

It may be surprising that no one figured out there were two species earlier. As Bayha comments "It's not that I did anything that different, it's just that no one else looked for a very long time. Jellyfish are something people don't pay attention to because they're fleeting. They come and go, are difficult to study, and they don't have hard parts [like] shells that wash up on the shore."

The increasing importance of jellyfish

Managing jellyfish is fast-becoming an important management issue worldwide. In large concentrations, they can affect fishing operations by clogging nets or reducing catch. Additionally, they can clog the intakes of coastal power and desalination plants, and may even force the closure of popular tourist beaches.

Still, not all impacts of jellyfish are bad. In fact, the notorious nettle found in the Chesapeake Bay is a friend to one of the region's most iconic seafood species, the Eastern oyster. By devouring a type of comb jelly or ctenophore known as Mnemiopsis, which is a key predator of oyster larvae, the bay nettle gives the young oysters a better chance at survival. Jellyfish also serve as a key food source for some fish and sea turtle species and provide protection for the young of some commercially important fish species like jacks.

Impacts of the new discovery

NOAA and partners currently operate a model that provides what are now known to be bay sea nettle predictions throughout the Chesapeake Bay. Fortunately the model won't be impacted since it is based on information from populations found in the Chesapeake Bay (the correct species). But the new identification will have impacts elsewhere. For example, this research enhances the possibility of detecting invasions of these two species in other parts of the world, and points to the possibility of other mistaken identities between estuarine and coastal species along other continental boundaries. Aquariums will also need to clarify the species present in their exhibits. In addition, the current body of research refers to both species as "Chrysaora quinquecirrha" though most of it is likely referring to the bay-based species. Sorting out the information and differences will take time.

The key to future management

The identification of a new sea nettle jellyfish adds to the roughly 200 species of true jellyfishes worldwide. "To manage a species you have to first know what it is, and we still have a way to go for jellyfishes and other marine species," says NOAA collaborator Allen Collins. The environmental conditions required for each jellyfish species to thrive are likely to be quite different. Thanks to this new research, scientists can now begin the process of better understanding these two jellyfish species, giving managers a better chance to mitigate some of their costlier impacts and helping beachgoers avoid their painful stings.

Dr. Keith Bayha published this work as a Research Collaborator with the Smithsonian Institution National Museum of Natural History, and is currently with Noblis-ESI.

Dr. Allen Collins is a Zoologist and Director of NOAA’s National Systematics Laboratory,. He is also an adjunct Research Zoologist with the Smithsonian Institution National Museum of Natural History, for which he serves as Curator of cnidarian and sponge collections.

Dr. Patrick Gaffney is a Professor at the School of Marine Science and Policy, University of Delaware College of Earth, Ocean & Environment in Lewes, DE.