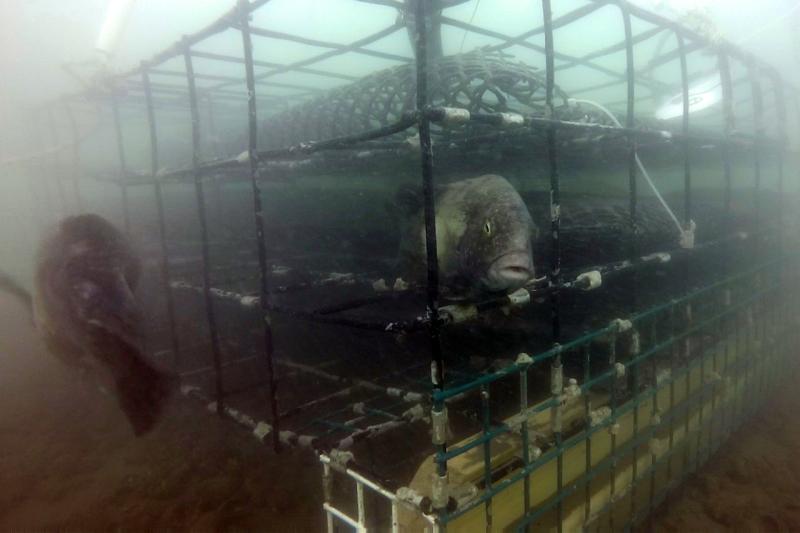 Terrestrial farmers, hunters, researchers, and even nature enthusiasts have long used trail cameras to capture how wildlife interacts with their environment. This process becomes more complicated when trying to digitally document how aquatic species interact with their environment due to factors like visibility, camera stand design, and the presence of microalgae in the water column.

For many years shellfish farmers have pointed to anecdotal evidence of fish species using oyster cages for their benefit—but sometimes seeing is believing. Three years ago a multidisciplinary team from the Milford Laboratory posed the question: Do oyster cages used in shellfish aquaculture provide habitat similar to that of naturally-occurring rock reef environments?

“There are many misconceptions about aquaculture and the environment,” said NOAA research ecologist Julie Rose. “People may think aquaculture simply competes with wild capture, but we know many growers have reported wild fish swimming around their aquaculture gear. We wanted to know: could we document habitat benefits of shellfish aquaculture for wild species?”

With some trial and error, a dozen GoPro cameras, and many hours on the water and in the lab, the research group has demonstrated that you can. 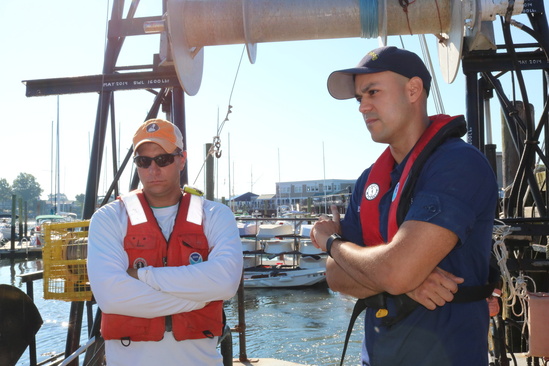 “The project has been incredibly successful and has documented many interactions with local fish species, but the team did a lot of troubleshooting and redesign to get to this point,” said biological technician Gillian Phillips. Phillips and her fellow team members selected the small field-of-view cameras to record underwater video of oyster off-bottom cages because of their relatively low cost and ease of use. However, this was not a set it and forget it project. “One of the first issues we discovered was that the water in our video footage appeared green due to naturally occurring algae found in Long Island Sound and natural attenuation of light by the water itself,” said Phillips. To correct this, the team turned to an inexpensive, commercially-available magenta filter that balances the color. The simple addition of the filter meant the team could skip post-processing video, saving time and storage space on their computers.

“Having a team with divers, fisheries experts, technicians and vessel captain and crew—all with field work experience—has been invaluable,” said project co-lead Renee Mercaldo-Allen. “Combined, the team has years of experience, and the new citizen guide for underwater filming allows the team to share their knowledge and lessons learned.”

When it comes to research and data collection, it is often thought that only highly trained scientists can take part. However, with the right guide and equipment, aquaculture farmers can become citizen scientists and an incredible assist.

“We did not set out to create a citizen science guide, we started out using the cameras for research,” said Phillips. “But as word spread about our study, we have been getting a lot of questions about how folks can use cameras in their own coastal waters.”

Why the growing interest from others? By recording these interactions, a grower can present local regulators and community leaders with footage of how their operations are not only providing local sustainable seafood, but are also creating foraging habitat and shelter for local species.

“Our footage has shown that commercially- and recreationally-important species like black sea bass, scup and tautog are using the shellfish aquaculture gear for their benefit,” added Phillips. “As more growers, researchers, and extension agents use this guide they will be building a repository of visual data for themselves and for fisheries research.”

“We hope this guide will help growers document the ecosystem benefits of their operations and provide a visual representation showing that aquaculture and wild-capture species can coexist together,” added Mercaldo-Allen.

Last updated by Office of Aquaculture on April 16, 2021