Humpback was immobilized much like a dog on a leash. 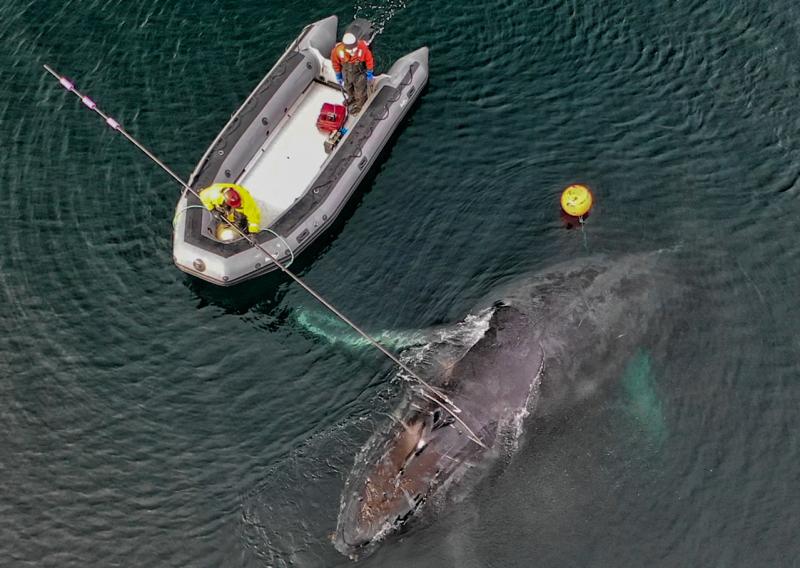 The whale had a tight wrap of line through the mouth and across its blowholes, as well as line and buoys around its tail, likely weighed down by a large cod pot.

“This humpback was hogtied—the flukes were pulled under the body, connecting to the head with heavy line—and anchored to a pot at the ocean’s bottom, which basically immobilized it, much like a dog on a leash,” said John Moran, a Juneau-based NOAA Fisheries humpback whale biologist and trained responder under the agency’s Large Whale Entanglement Response Network. Moran flew to Dutch Harbor Friday to lead the on-water effort to free the whale. “The response team—which included two vessels and reconnaissance using underwater cameras and an overhead drone—spent 12 hours over two days on the water making numerous attempts at cutting the lines binding the whale.”

After a few successful cuts, the flukes were freed from the head allowing the whale to swim. Fortunately it headed into shallower water, making it easier to cut the line attached to the pot.  The whale still had 200 feet of line around the flukes. A cutting grapple and knives were used to work on the remaining gear as the animal swam.

“Suddenly there was a popping sound, and the gear floated to the top,” said Moran. “Apparently a cutting grapple hook had taken about an hour to work through the line and cut it loose. Then we saw the whale swimming freely and knew it was free of the entanglement.” 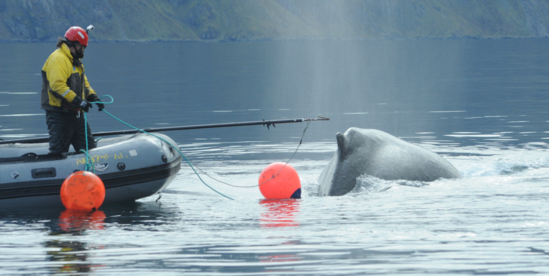 A U.S. Army Corps of Engineers (USACE) biologist reported the entangled animal to the Alaska SeaLife Center last Monday. At that point it was observed in Unalaska Bay off Needle Rock, and was reported to be floundering and trailing two buoys. It then moved offshore and out of sight.

It was re-sighted in the bay late Tuesday, and observers suspected it was anchored. When the whale did not throw the gear on its own, NOAA Fisheries began organizing a response after confirmation the animal was immobilized in a life threatening situation.

On Thursday, a port vessel was dispatched with an FAA certified drone operator in an effort to collect aerial imagery and additional information about the entanglement to inform response efforts. The humpback whale was found to be immobile, indeed anchored by the gear it was carrying.

At the time of its release, the response team reported the whale in “good” condition, and very likely to survive its ordeal. It was last sighted heading out to sea.

“Once we got the gear off, it took off, and was swimming freely and breathing normally,” added Moran. “It was a long day, but everyone on the response team was super committed to getting this done. The team work was amazing.”

If you see a marine mammal in distress, please report it immediately to the NOAA Fisheries 24-hour Alaska Marine Mammal Stranding Hotline at (877)925-7773.