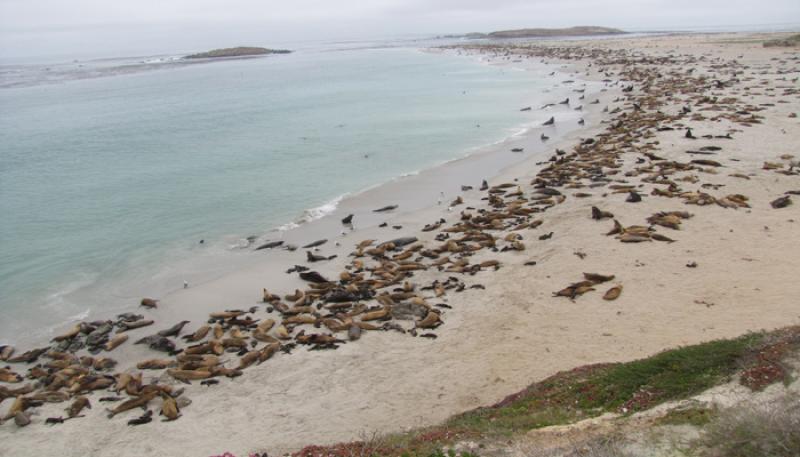 The protection and resurgence of major predators such as seals, sea lions and wolves has created new challenges for wildlife managers, including rising conflicts with people, other predators and, in some cases, risks to imperiled species such as endangered salmon and steelhead, a new research paper finds.

The study by scientists from NOAA Fisheries’ Northwest Fisheries Science Center and the University of Washington examines recovering predator populations along the West Coast of the United States and in the Greater Yellowstone ecosystem, and the conflicts surrounding them. The study was published today in the journal Conservation Letters.

In the Pacific Northwest, for example, California sea lions that have increased under the Marine Mammal Protection Act have increasingly preyed on endangered salmon. Wolves reintroduced to Yellowstone in 1995 have since cut into elk herds, reducing human hunting opportunities.

“Increases in predators can be seen as successful in terms of efforts to recover depleted species, but may come at a cost to other recovery efforts or harvest of the predators’ prey,” said Eric Ward, a NOAA Fisheries biologist and coauthor of the paper.

The scientists describe three types of conflicts that can emerge as predators rebound under the protection of the Endangered Species Act and Marine Mammal Protection Act:

Pacific Northwest waters include many such conflicts, largely because many top predators such as sea lions, elephant seals and several whales are increasing in number and prey upon salmon, steelhead, rockfish and other fish protected by the Endangered Species Act.

Conservation conflicts have also emerged elsewhere: On California’s San Clemente Island, a threatened island fox species preys on an endangered shrike, while protected golden eagles prey on both the fox and the shrike. Also in the Pacific Northwest, protected barred owls are moving into forest habitat long important to threatened spotted owls and double-crested cormorants, like sea lions, have been targeted for culling to reduce predation on Columbia River salmon.

The scientists call for improved monitoring and modeling to better anticipate interactions between predators and prey, and assess whether steps to manage predators may be warranted.

Where conflicts continue, the scientists suggest developing multi-species recovery plans that consider the tradeoffs between increasing predators and other protected species.

“Predators such as bears, wolves and whales are charismatic creatures often seen as bellwethers of ecosystem health,” said Kristin Marshall, a postdoctoral researcher at NOAA Fisheries who completed graduate research in Yellowstone and lead author of the paper. “We’re fortunate to have places such as Yellowstone and the Northeast Pacific where they can recover, but in protecting one species you have to be thinking ahead to account for cascading effects that may impact other species too.”

The Endangered Species Act and Marine Mammal Protection Act do recognize larger ecosystem needs. For instance, the first purpose of the Endangered Species Act is “to provide a means whereby the ecosystems upon which endangered species and threatened species depend may be conserved,” and the Marine Mammal Protection Act seeks to “maintain the health and stability of the marine ecosystem.” Both NOAA Fisheries and public land managers in the Yellowstone region are increasingly pursuing ecosystem-based management with those goals in mind. Research has also found ecological benefits from the reintroduction of wolves in Yellowstone.

NOAA Fisheries has authorized states under the Marine Mammal Protection Act to remove sea lions known to be preying on endangered salmon, for instance. An “experimental” designation under the Endangered Species Act allowed for removal of wolves that attacked livestock, although wolves are no longer listed as endangered in Montana and Idaho and are now subject to hunting.

But the scientists note that resolving conflicts by culling predators may itself have unintended consequences and will face public and legal opposition that may limit management options.

“Thirty years ago scientists predicted that increases in predator populations would cause more of these conflicts to emerge,” Ward said. “We’ve largely seen these predictions come true, and there’s no indication of these conflicts decreasing.”