This August, a fisherman on the Connecticut River had quite a surprise when he reeled in a relic from the age of dinosaurs.

This August, a fisherman casting downstream of the Vernon Dam (in Vernon, Vermont) on the Connecticut River (see map) had quite a surprise when he reeled in not a walleye or bass, but instead a relic from the age of dinosaurs: an adult-sized shortnose sturgeon. 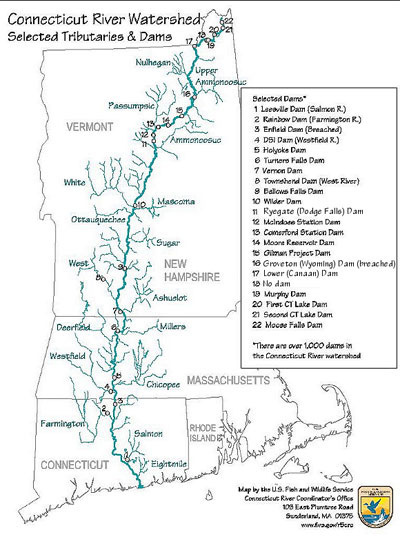 Map of dams along Connecticut River

Sturgeon are among the most primitive of the bony fish, and have five rows of bony plates or “scutes” covering their bodies. More than once, these odd-looking ancients have been mistaken for sea monsters. Shortnose sturgeon are the smallest of the sturgeon species that live in North America, and have been listed as endangered since 1967. As part of our Recovery Plan for the species, we monitor their populations in a number of rivers along the U.S. East Coast. 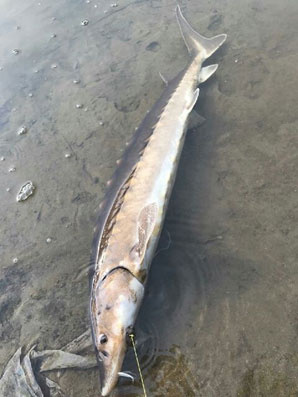 Although shortnose sturgeon sometimes jump out of the water, they don’t leap to overcome migration obstacles like salmon do, so researchers and managers were fairly certain that steep falls like Great Falls, where the Turners Falls Dam was built in 1905, blocked sturgeon access to the upstream reaches of the Connecticut River. In fact, it has been widely accepted that the range of Connecticut River shortnose sturgeon was from the mouth of the river at Long Island Sound to the Turners Falls Dam. After word of this catch got around, we heard about other sturgeon sightings between the Turners Falls Dam and the Vernon Dam, as well as between the Vernon Dam and the Bellows Falls Dam (in Bellows Falls, Vermont). No sightings upstream of the Vernon Dam have been verified.

We have three theories as to how this sturgeon came to be upstream of the Turners Falls Dam, but no one knows for sure. It’s possible that the fish made its way upstream past the falls through the fish ladder installed in 1980. However, sturgeon aren’t very good at using fish ladders and no observations of sturgeon passage at the Turners Falls ladder have been recorded. In recent years this fishway has been monitored intensively, but that wasn’t always true, so it’s possible individuals could have slipped through undetected. Or perhaps someone captured the fish in question or its ancestors below the dam and released them upstream. From the late 1700s to the mid-1800s, a series of barge locks existed at Turners Falls to aid in the movement of boats up and down the river. It’s possible that sturgeon used the locks to move upstream during that time. There may be a remnant population of shortnose sturgeon living in the upper Connecticut River since before there were dams or that migrated there through the locks. If that is the case, we think this population would be very small, as we have no records of sturgeon caught in any fish sampling that has been done in this area.

For the past several years, we have been working with Holyoke Gas and Electric to improve fish passage on the Holyoke Dam. This year, the station opened a modified fishway, which consists of two “lifts” that carry migrating fish up and over the dam. The fishway has already improved passage for many species of anadromous fish, including American shad, alewife, blueback herring, and sea lamprey. And, for the first time in 20 years, shortnose sturgeon were passed upstream of the dam! So far, 85 shortnose sturgeon have been counted at the fishway in 2017, and a number of these fish have been tagged. We are excited to find out where they go and how their behavior compares to other shortnose sturgeon between the Holyoke Dam and the Turners Falls Dam.

We’re looking forward to working with our partners, including the states of Massachusetts, New Hampshire, and Vermont, the U.S. Fish and Wildlife Service, and the USGS, to learn more about shortnose sturgeon in the upper Connecticut River. We’ll also be working with the hydropower companies along the river to understand how their projects might impact shortnose sturgeon above the Turners Falls Dam.

Remember that no matter where they occur, shortnose sturgeon are endangered. That means that keeping any shortnose sturgeon is prohibited. This spring, we’ll be posting signs along the river to remind anglers that any sturgeon should be immediately released, and that will provide handling and reporting tips for your and the fish’s safety.

If you have information on sturgeon in the Connecticut River upstream of the Turners Falls Dam, we would love to hear from you! Please contact Edith Carson (Edith.Carson@noaa.gov) or Julie Crocker (Julie.Crocker@noaa.gov) with any stories, photos, other information, or questions.