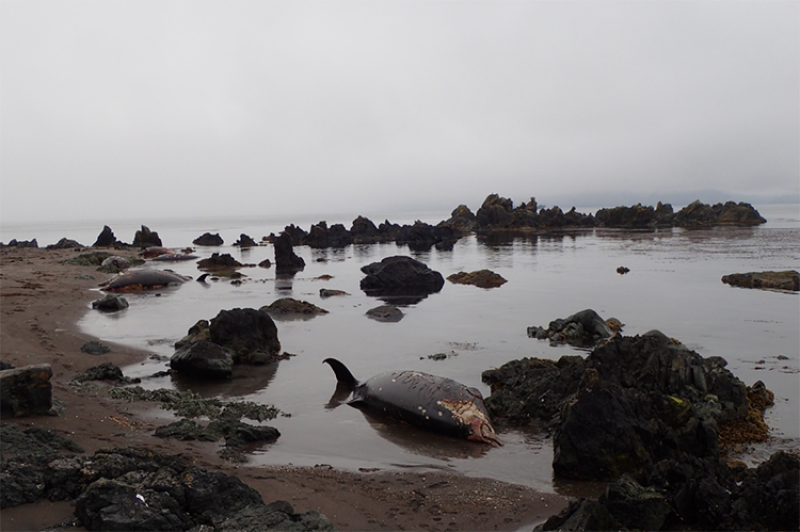 A new scientific paper suggests that seismic activity may have been involved in a mass stranding death of whales along the Aleutian Islands.

When whales strand along the shores of Alaska’s remote and far-flung Aleutian Islands, they may never be discovered by humans. The chain of small, sparsely populated islands arc from the tip of the Alaska Peninsula west 1,100 miles to Attu Island.

Adak Island sits a little more than half-way between Unalaska — home to the nation’s largest fishing port (Dutch Harbor) by volume of seafood landed — and Attu Island. It was the most westerly American base during World War II, providing a base for naval operations against Japanese garrisons. After the war, it became a U.S. military outpost through the U.S.-Soviet Cold War years until the base was closed in 1997. Most of Adak Island is uninhabited and managed as part of the Alaska Maritime National Wildlife Refuge. An estimated 100 permanent residents still live on Adak, and up to 300 people may live on the island at any one time throughout the year. There is an influx of workers related to a seafood processing plant on the island.

It was along the shores of NavFac Beach on Adak Island that Tom Spitler discovered a dead whale on August 3, 2018. He took photos of the carcass and showed them to his wife Lisa Spitler, an Alaska Maritime National Wildlife Refuge biological technician stationed on Adak. She reported the stranding to NOAA Fisheries Alaska Regional Office. Biologists there determined through the photos that it was a rare occurrence: an adult female Stejneger’s beaked whale.

Five days later a local man named Eddie Wine found seven additional stranded beaked whales floating among the rocks on Palisades Point on Adak. They were just 1.2 miles northeast of the beaked whale found earlier. After he and Lisa Spitler walked the length of shore taking photos, they reported their latest findings to NOAA Fisheries. NOAA marine mammal experts determined that these whales were Stejneger’s beaked whales as well.

Stejneger’s beaked whales are a poorly understood, deep-diving whale species found in the North Pacific Ocean. Dr. Leonhard Stejneger first described the species based on the skull of a young whale found in 1883. It was found on Russia’s Bering Island, one of the westernmost islands in the Aleutian Island archipelago. The first documented specimen in Alaska was a single piece of the lower jaw that was found in the eastern Gulf of Alaska in 1927.

A new article, co-authored by members of NOAA Fisheries’ Alaska Marine Mammal Stranding Network, was recently published in Marine Mammal Science. The paper states that there have been at least 74 Stejneger’s beaked whale strandings in 42 separate events in Alaska since the discovery of the species. It is the first comprehensive and updated compilation of history, distribution, and findings of Stejneger’s beaked whales in Alaska.

“This paper builds on Stejneger’s beaked whale strandings data in Alaska since relevant data were last published in 1994,” said the paper’s lead author and NOAA Fisheries veterinarian Dr. Kate Savage. “The information provided in this paper, combined with the prior published data, represents the majority of knowledge about Stejneger’s beaked whales in Alaska, and is critical for understanding the baseline condition of this elusive species in the face of a warming ocean.”

Findings detailed in the paper are central to our understanding of this species. The paper:

“Even though I’d seen photos, it didn’t truly prepare me for the impact seeing all these dead beaked whales strewn amongst the rocks,”

said Sadie Wright, a member of the stranding response team with NOAA Fisheries Alaska Regional Office. “I kept asking myself why? Why are these eight dead adult female whales side-by-side on a beach together? They appeared otherwise healthy with no major external injuries. It was intriguing.”

Wright, along with Sonia Kumar from Alaska Veterinary Pathology Services and Alaska Maritime National Wildlife Refuge’s Marc Webber, flew to Adak on August 11 to meet up with Lisa Spitler. The team brought supplies to collect and preserve samples from the whales. That evening they visited the carcasses on NavFac Beach and Palisades Point to assess the event and to take photographs.

The next morning the team began the necropsies — similar to an autopsy, but on an animal instead of a human. They collected various biological data such as length, body condition, and high-priority samples. Three local volunteers assisted with data collection, recording details, and photo documentation of the whales and the response activities.

Volunteer Eddie Wine took on the monumental task of removing the sand that the tide had deposited around the carcasses so that the necropsy team could access the full remains. He used a shovel and his hands to dig the sand out from around the heads and fluke, as well as the entire mid-dorsal to mid-ventral region. He also helped collect and prepare tissue samples for analysis, and helped prepare the skulls for various museums.

Scientists can learn a lot from the measurements and tissue samples collected. Blubber thickness can indicate the general health of each animal. Many organ tissues can be examined for damage, disease, infection, and possible contaminants. Feces can reveal if the whale was exposed to harmful algal blooms. Genetic material can determine how closely the stranded Stejneger’s beaked whales are related to each other and other whale species. The reproductive tract provides current pregnancy status and reproductive history.

The Mystery: Cause of Death

In assessing the cause of death in stranded marine mammals, scientists consider both natural and human-caused sources. Natural sources can include toxic blooms, parasites, viruses, and other diseases.

Globally, strandings and mass stranding of deep-diving whale species, such as beaked whales, have been causally linked to mid-frequency active sonar (MFAS) use by military operations. Previous research looked at the tissues in stranded beaked whales whose deaths were causally-linked to military sonar operations near the Canary Islands. They found hemorrhaged and congested tissues around the acoustic jaw fat, ears, brain, and kidney. There were also gas bubble-associated lesions and fat embolism in the vessels and tissues of vital organs. The result of this tissue damage is something akin to decompression sickness, caused by nitrogen supersaturation beyond levels that tissues can withstand.

Unfortunately, the carcasses of the eight 2018 Adak whales were too decomposed to determine the cause of death, including any possible evidence of sonar-associated strandings. Additionally, at the time of the mass stranding in 2018, there was no passive acoustic monitoring in the region that could have established the presence of MFAS.

NOAA Fisheries marine mammal experts contacted the U.S. Navy shortly after the 2018 mass stranding. It confirmed that they had not conducted training or testing activities using sonar or explosives anywhere in Alaskan waters since May 2017.

However, the U.S. Geological Survey’s Alaska Volcano Observatory’s monitors had detected  human-caused seismic survey activity at regular intervals for hours at a time along the Aleutian Islands between July 5 and 20, 2018. Based on triangulation of data from multiple seismometers, the observatory  determined the source of the noise likely centered about 40 miles northwest of Adak. Scientists still do not know the source of the seismic activity. Fourteen days passed  between the last detection of the seismic activity and the discovery of the first whale that was part of the 2018 Adak mass stranding event. However, a link between the Stejneger’s beaked whale mass stranding and the seismic activity cannot be ruled out.

The data collected during stranding responses like this contributes to the best available science about a species. NOAA Fisheries will consider this research along with all other relevant research when making management decisions.