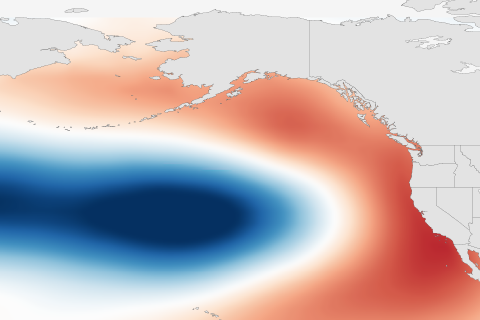 Sea surface temperature (SST) anomaly pattern associated with the positive (or warm) phase of the Pacific Decadal Oscillation (PDO). Red shading indicates where SSTs are above average, and blue shading shows where SSTs are below average. During negative (cold) phases, the pattern reverses. Image adapted by NOAA Climate.gov from original by Matt Newman based on NOAA ERSSTv4 data.

The Pacific Decadal Oscillation index (PDO) is a recurring atmosphere-ocean climate pattern centered over the mid-latitude Pacific Ocean basin. It consists of a warm and cool phase, which alters upper level atmospheric winds. Shifts in the PDO phase can have significant implications for global climate, affecting Pacific and Atlantic hurricane activity, droughts and flooding around the Pacific basin, the productivity of marine ecosystems, and global land temperature patterns. This climate pattern can persist for just a few years to multiple decades.

During a “warm”, or “positive”, phase, the west Pacific becomes cooler and part of the eastern ocean warms; during a “cool” or “negative” phase, the opposite pattern occurs.

More from NOAA's Climate.gov: Going out for ice cream: a first date with the Pacific Decadal Oscillation

Historic Influence of the PDO on World Weather

Studies have shown that during the positive “warm” phase of the PDO, the wintertime Aleutian low is deepened and shifts southward. During this time, warm/humid air is advected along the North American west coast. Temperatures are higher than usual from the Pacific Northwest to Alaska. However, they are below normal in Mexico and the Southeastern United States.

Winter precipitation is higher than usual in the Alaska Coast Range, Mexico and the Southwestern United States. Temperatures are reduced over Canada, Eastern Siberia and Australia.

The Asian Monsoon is also affected. Increased rainfall and decreased summer temperature is observed over the Indian subcontinent during the negative phase of the PDO. 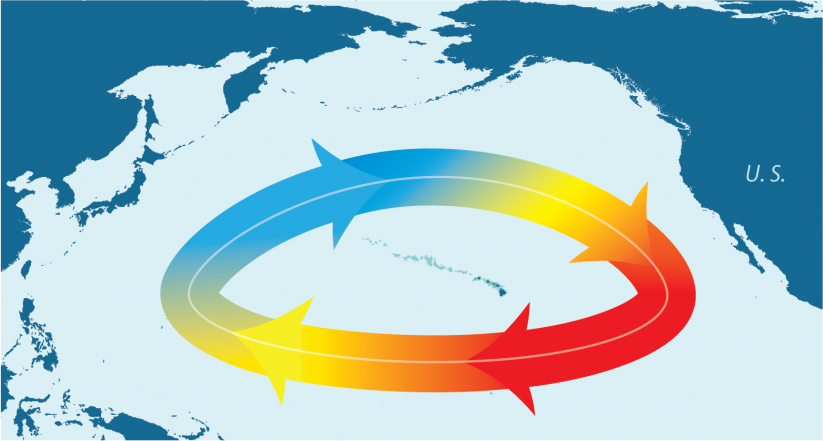 The North Pacific Gyre Oscillation (NPGO) is a climate pattern. It is used as an index to measure changes in ocean currents and circulation patterns and explains key physical-biological variables. It is significantly correlated with previously unexplained fluctuations of salinity, nutrients and chlorophyll-a measured in long-term observations in the California Current (CalCOFI) and Gulf of Alaska.

Fluctuations in the NPGO are driven by regional and basin-scale variations in wind-driven upwelling and horizontal advection. These are the fundamental processes controlling salinity and nutrient levels. Nutrient fluctuations drive changes in phytoplankton concentrations, and may force similar variability in higher trophic levels.

The NPGO thus provides a strong indicator of fluctuations in the mechanisms driving planktonic ecosystem dynamics. 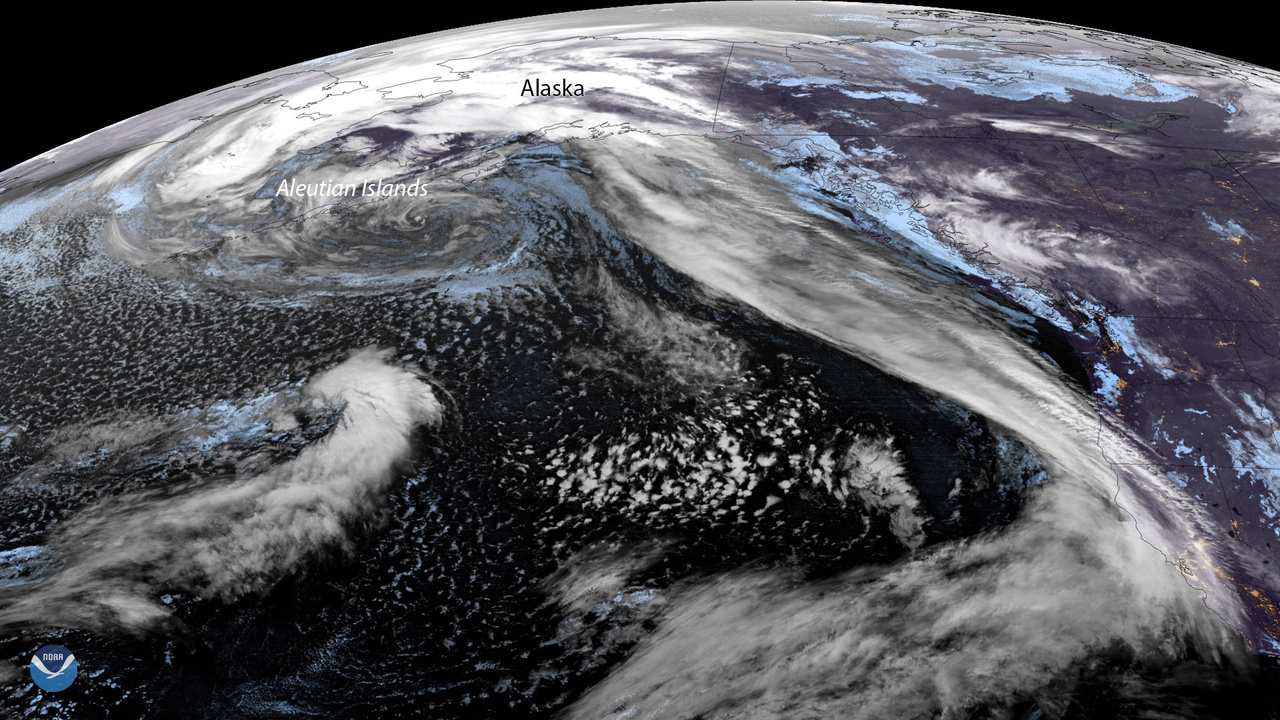 An impressive low-pressure system that stretches 3,000 miles from the Gulf of Alaska to the Hawaiian Islands is intensifying just off the coast of the Aleutian Islands. This pre-sunrise view captured by GOES West on March 22, 2019, at 9:10 a.m. ET shows what’s known as an Aleutian Low, which gets its name from its proximity to Alaska’s Aleutian Islands. Image: NOAA Environmental Visualization Laboratory

The Aleutain Low is a semi-permanent, subpolar area of low pressure located in the Gulf of Alaska near the Aleutian Islands. Storms often reach maximum intensity in this area. It is most active during the late fall to late spring.

During the summer, it is weaker, retreating towards the North Pole and becoming almost nonexistent. The North Pacific High pressure system dominates the area at this time.

More from NOAA's Climate.gov: Going out for ice cream: a first date with the Pacific Decadal Oscillation