To manage fisheries, data are needed—not only for species targeted by a fishery, but for all species making up the affected ecosystem. Observers are the only independent data collection source for some types of at-sea information, such as bycatch, catch composition, protected species interactions, and gear configuration.

Not everything caught by a fishing vessel is kept. In many cases, fishing vessels throw back fish that are too small or are not the species being targeted. Some protected and regulated species cannot be kept by law and are also discarded. In other cases, the fishing vessel has reached its total allowable catch for a species, so any extra catch of that species must be discarded. Depending on the fishery, discards may be live or dead.

Observer programs are the primary source for discard data in the United States. While on board commercial fishing vessels, observers record the type and amount of discards as well as the reason for discarding. We need this information to create a complete picture of fishing impacts. High levels of discards, particularly of commercial and ecologically valuable species, may be a signal to alter fishing activities or gear to reduce the impact of fishing on the marine environment.

To monitor the size and health of fish stocks, our scientists periodically assess and monitor them. These stock assessments tell our scientists and managers whether changes in a fish population are due to natural or human-related causes, and can help them predict future trends in the population. These assessments drive the fisheries management process and allow managers to set catch levels, maintain healthy fish populations, and rebuild overfished stocks—all required by the Magnuson-Stevens Act.

The stock assessment process requires detailed information for each species, including size, age, gender, and number caught. Our fishery biologists use the information provided by observers, along with other data sources such as research cruises and fisherman-reported data, to complete a stock assessment.

Observers also collect information on when and how often fishermen interact with, or “take,” protected species like marine mammals, sea turtles, certain populations of fish, and endangered seabirds. The term “take” refers to fisheries interactions with species protected under the Marine Mammal Protection Act or Endangered Species Act. The data collected help scientists develop ways to reduce the risk of fisheries interactions with these species. The information collected by fisheries observers also allows scientists to monitor the health of marine mammal and protected species populations, which is required under the Marine Mammal Protection Act and the Endangered Species Act.

Biological data—such as estimates of the total number, age, and gender, of animals incidentally killed or seriously injured during the course of commercial fishing operations—are used by NOAA Fisheries take reduction teams when developing take reduction plans. These plans help to recover or prevent depletion of certain marine mammal stocks. Biological data on capture and discard rates of fish species are also an important part of recovery plans developed for threatened and endangered species under the Endangered Species Act.

The fishing industry constantly evolves as new technology is developed and new markets open. Observer programs are one way to collect information on the impacts of changes in fishing activity and gear types.

Observers are often included as a condition of getting federal exempted fishing permits. These permits are issued to test modifications to fishing gear, such as devices intended to help reduce bycatch. An exempted permit may also be issued when a fishery develops to serve a new market. In all of these cases, observer data help fisheries managers make balanced decisions on the potential benefits and impacts of the experiment. In the past, observer data collected under exempted permits  has led to the development of bycatch reduction devices such as the turtle excluder devices in the southeastern U.S. shrimp trawl fishery, and the implementation of acoustic deterrents, or “pingers,” to reduce harbor porpoise bycatch in the Northeast and Southwest.

Learn more about fishing gear and risks to protected species

For rebuilding species, such as New England groundfish, preseason target catch numbers are provided to the management team. After the fishing season, observer data are evaluated and compared to the preseason targets to evaluate total catch, and the next season’s targets are adjusted accordingly. We may also cap the number of marine mammals, sea turtles, or seabirds incidentally caught by the fishery. Observer data are used to estimate when that number has been reached. If it is reached before the fishing season ends, the fishery may be closed early. 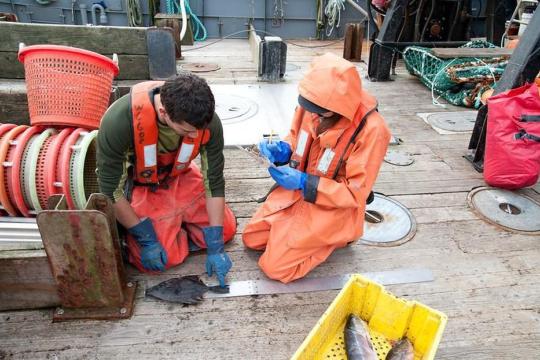