How to use scales to age Summer Flounder 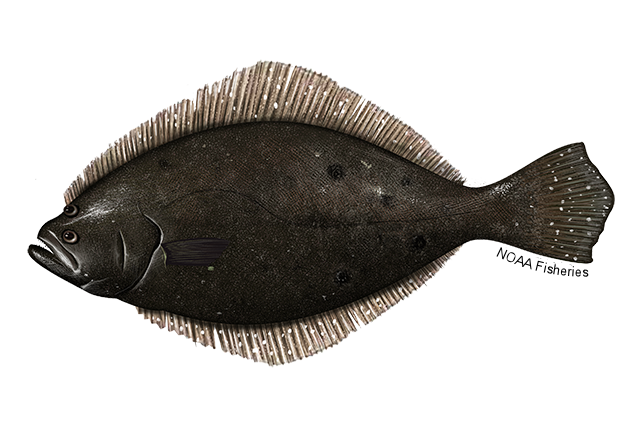 Summer flounder is a relatively active, predaceous, and fast-growing species ranging from Nova Scotia to the northern Gulf of Mexico but is most common from Cape Cod to South Carolina (Vladykov and McKenzie 1935, Bigelow and Schroeder 1953, Briggs 1958, Leim and Scott 1966). Females grow faster than males; males attain a maximum age and length of about 7 years and 60 cm (24 inches), respectively, as compared with 12 years and 82 cm (32 inches) for females. Summer flounder are sexually mature by age 2 (Morse 1981).

Summer flounder of the U.S. continental shelf appear to be divided into two stocks, north and south of Cape Hatteras, although in the vicinity of Cape Hatteras there may be some mixing of the two groups (Wilk et al. 1980, Fogarty et al. 1983). Seasonal inshore/offshore migrations occur in response to changes in water temperature. During winter and early spring, summer flounder are concentrated offshore in depths of 70-155 m along the outer edge of the continental shelf (Byrne and Azarovitz 1982), but in late spring and early summer they move inshore and concentrate in shallow coastal waters and estuaries. An offshore migration begins in August or September (Wilk et al. 1977). Spawning begins in September in southern New England and New Jersey waters coincident with offshore movement, and progresses southward with cooling water temperatures, ending by February off Cape Hatteras (Smith 1973, Morse 1981). Coastal estuarine areas are nursery grounds for this species (Able et al. 1990).

The use of otoliths to age summer flounder has been investigated (Poole 1961; Eldridge 1962; Powell 1974, 1982; Smith and Daiber 1977), however, the results of some of these studies have been controversial due to uncertainty in locating the first annulus (complicated by north/south differences in spawning times), poor calcification of otoliths, and apparent reversal of the usual seasonal timing of formation of opaque and hyaline zones (Smith et al. 1981). Hyaline edge forms on otoliths during spring and summer months; opaque edge forms during autumn and winter months.

Summer flounder scales are removed from a localized area just above the lateral line, anterior to the caudal peduncle and stored dry in coin envelopes. These scales are ctenoid (although the ctenii are greatly reduced) with numerous radial grooves extending from the focus to the anterior edge of the scale. Since the segmented circuli ridges on these scales are finely sculptured, laminated plastic, composed of a thin, soft layer of polyethylene laminated to a harder layer of vinyl chloride (Dery 1983) is used for scale impressions. A minimum of six scales are impressed evenly and quickly under heavy pressure of a roller press. Scale impressions are then examined at 40x using a microprojector.

"Cutting-over" or erosion marks represent annuli on summer flounder scales. Such marks are formed from annular erosion of the scale edge, and appear as a sudden break or discontinuity in the formation of one or more (segmented) circuli. In the anterior field of the impression, these marks resemble concentric "white" lines under transmitted light, indicating fragmentation or absence of circuli due to erosion (Figure 1). In the lateral field of the scale, circuli immediately following the mark appear to cross over or cut across previously formed circuli. A cutting-over mark should be continuous and intersect the posterior field to be interpreted as a true annulus (Figure 2).

North of Cape Hatteras, annulus formation normally occurs during late spring-early summer. By September, most summer flounder scales exhibit substantial amounts of seasonal growth beyond the last cutting-over mark formed. From late June through July, however, interpretation of the scale edge may be difficult due to individual variation in the timing of annual scale edge erosion. Although cutting-over marks form as late as June, the edge of the scale is included in the assigned age as of 1 January by convention. Scale edge formed subsequent to the cutting-over mark (through December) is interpreted as "+" growth and is not included in the assigned age. Figure 3 shows a scale from an age 4+, 51 cm female summer flounder collected in June with a small amount of scale growth ("+" edge) beyond the last cutting-over mark.

Variations in scale growth patterns (north of Cape Hatteras) have not been systematically studied. However, latitudinal differences in rate of growth as reflected by spacing of circuli on the scales, and changes in the size of the first annulus (presumably due in part to north-south shifts in spawning time) have been observed.

Following criteria established at the 1980 and 1990 summer flounder age and growth workshops (Smith et al. 1981, Almeida et al. 1992), the first annulus is interpreted as the first continuous cutting-over mark formed on the scale. For summer flounder hatched in October in more northerly waters (e.g., off southern New England and New Jersey), the distance from the focus to the first annulus may be relatively great, reflecting 18 to 21 months of growth from hatching to formation of the first cutting-over mark (second spring following hatching). Relatively wide spacing between circuli up to the formation of the first cutting-over mark is characteristic of the scales of many of these fish (Figure 4) (see also Dery 1981).

Further south, with a later spawning season (13 to 21 months of growth) and different environmental conditions, circuli in the 0+ region of the scale tend to be spaced more closely together reflecting slower growth (Figure 5). The distance from the focus to the first annulus decreases; on some scales the first annulus marks a sharp discontinuity between a 0+ zone of closely spaced circuli and a subsequent zone of widely spaced circuli (Figure 6). Dery (1981) studied scales from small samples of young summer flounder from several coastal nursery areas and determined that mean backcalculated length at the first cutting-over mark was 26 cm for New Jersey samples, 21 cm for Delaware/Maryland samples, and 19 cm for Virginia samples.

Accurate interpretation of the first annulus may be complicated by several factors. Some scales exhibit a small zone of thin, closely spaced circuli near the focus that is not bounded by a cutting-over mark (Figure 7). This zone may be confused with the small first annulus described above for summer flounder of more southern areas because of close circulus spacing. However, the lack of a cutting-over mark bordering this zone and more frequent association with scales from more northerly areas suggests that this zone may reflect slow growth experienced by autumn-early winter hatched juveniles during the first winter of life.

The presence of a weak, incomplete cutting-over mark formed prior to the first annulus may also result in overinterpretation of age. Such marks are generally evident only in the anterior field of the scale and do not continue into the ctena (Figure 5). Sudden and marked shifts in circulus spacing can also resemble annuli, especially if the location of such a shift suggests an annulus (Figure 7). These shifts in spacing do not involve cutting-over; the rows of circuli remain parallel to one another and do not intersect (Figure 2). Erratic shifts in circulus spacing are generally characteristic of summer flounder scales. For this reason circulus spacing is not normally used as a criterion for annulus interpretation unless a consistent annual pattern is evident for individual fish.

Anomalies causing difficulty with age interpretation include checks, split annular zones (double cutting-over marks), and erratic changes in circulus spacing. In addition, scale size may vary significantly for individual fish and for fish of similar lengths, despite attempts to remove scales from a specific location. This makes it difficult to achieve a perspective concerning the size of scales and proportional size of growth zones in relation to fish length.

A check (false cutting-over mark) is characteristic of the second year of growth on some scales and has been a major source of age disagreement. This check may be strongly evident in the anterior field and resemble an annulus since it is often associated with a wide increment between the first and second annuli. However, cutting over is weak or absent laterally on the scale. Alternatively, an erosion mark may appear weak in the anterior field but more pronounced laterally on the scale (Figures 6 and 8). In rare cases the check may resemble an annulus, but the anomalous spacing of zones indicates that the mark is more likely to be a check (Figure 1).

Checks greatly complicate interpretation of some scales from older fish, since annuli become increasingly closely spaced near the edge of the scale. These marks may appear identical to annuli in the anterior field but on close examination are not continuous into the lateral fields. Some scales exhibit many such marks that may reflect scale damage (Figure 9).

Two cutting-over marks spaced closely together are interpreted as constituting a single annular zone if they fuse together laterally on the scale (Figure 10). Scales forming such marks (termed split annuli) tend to repeat this pattern from year to year, facilitating interpretation of this anomaly.

Erratic shifts in circulus spacing can mask cutting-over marks. As previously mentioned, sudden, brief growth spurts can superficially resemble annuli (Figure 7). If the same pattern of circulus spacing is repeated on individual scales from year to year, true annular marks, otherwise masked by erratic growth shifts, may be more easily identified (Figure 11). One type of repeating pattern that actually highlights the annular zones is the tendency for some scales to exhibit a zone of very wide circulus spacing immediately prior to cutting over (Figure 12). In general, a helpful approach to interpreting scales exhibiting confusing or erratic patterns is to avoid examining the scale in detail until a general sense of the pattern has been achieved. Figure 13, however, shows a scale from a 71 cm, age 5(6)+ female where the pattern of growth is so erratic that age interpretation is very difficult. An estimated age was assigned based on the number of completed cutting-over marks observed laterally on the scale.

In summary, age interpretation of most summer flounder scales is straightforward if good scale impressions are available and if cutting-over marks are carefully evaluated for continuity into the ctena and spacing relative to other zones. Familiarity with variations in the pattern of first-year growth with geographic area seems necessary for accurate interpretation of the first annulus.

In terms of general orientation to scale patterns, it is recommended that a sense of the overall pattern of growth be achieved before more detailed features are evaluated. Experience has indicated that overinterpretation of age is otherwise likely to result, since growth patterns on some summer flounder scales are quite complex.