The diverse ecosystem contained within the monument is home to many species of coral, fish, birds, marine mammals, and other flora and fauna including the endangered Hawaiian monk seal, the threatened green sea turtle, and the endangered leatherback and hawksbill sea turtles. 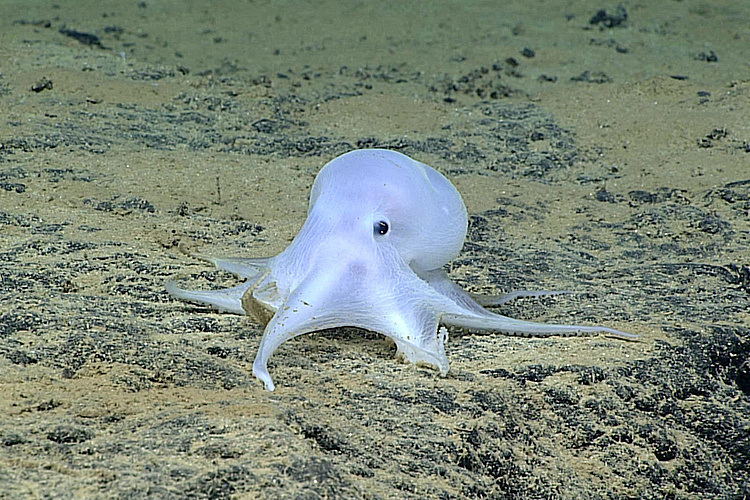 While exploring at depths of over 4,000 meters northeast of Necker Island in the Hawaiian Archipelago, Deep Discoverer encountered this ghostlike octopod, which is almost certainly an undescribed species and may not belong to any described genus. Photo: NOAA Office of Ocean Exploration and Research (OER), Hohonu Moana 2016.

Papahānaumokuākea Marine National Monument is the single largest fully protected conservation area in the United States, and one of the largest marine protected areas in the world. It encompasses 582,578 square miles (1,508,870 square kilometers) of the Pacific Ocean.

It’s located in the Northwestern region of the Hawaiian Archipelago roughly 3,000 miles from the nearest continental land mass.

In July 2010, Papahānaumokuākea was designated as the United States’ first mixed (natural and cultural) World Heritage site, further demonstrating the global significance of this important place.

The diverse ecosystem contained within the Monument is home to a wide variety of species, approximately 25 percent of which are Hawaiian endemics, found nowhere else on Earth. It's also a critically important nesting ground for the green sea turtle and breeding ground for the Hawaiian monk seal. 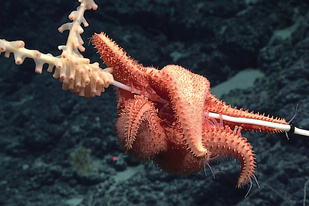 The Monument protects 3.5 million acres of coral reef — 70 percent of the total coral reef area in the United States — where sharks and large fish like ulua (trevally jack) still dominate. It is one of the last apex predator–dominated coral reef ecosystems in the world.

Over 90 percent of the Monument’s area includes depths greater than 3,000 feet (914 meters). These dark habitats host unique ecosystems and creatures, such as Hawaiian sleeper sharks and Hawaiian gold corals, some of which are thousands of years old.

The Monument's terrestrial environment is home to over 14 million seabirds representing 22 species, including the largest colonies of Laysan and black-footed albatross in the world. It is also home to the oldest known bird in the wild, a Laysan albatross known as "Wisdom" who is at least 67 years old and still rearing chicks.

Additionally, the Monument may contain as many as 60 shipwreck sites, the earliest of which dates back to 1818, and at least 61 aircraft sites. 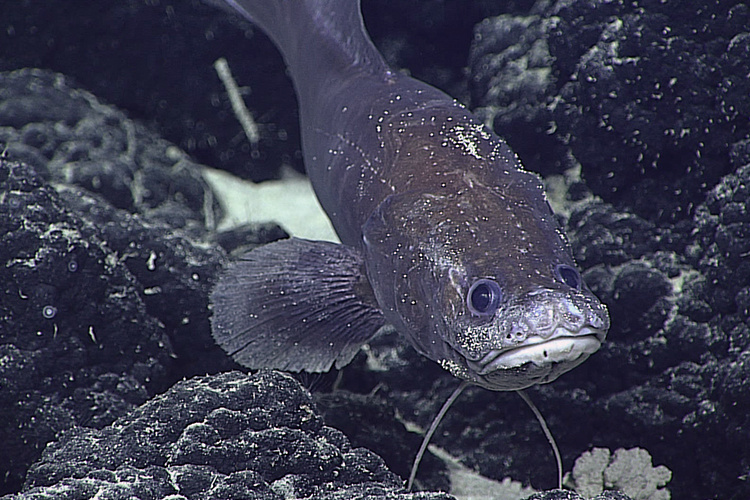 This member of the family Ophidiidae was seen cruising near the bottom north of Pioneer Bank in Papahānaumokuākea Marine National Monument. Photo: NOAA OER, Hohonu Moana 2016.

Only increased awareness and behavioral changes from individuals and businesses will bring relief to these stressors facing not only the Monument, but also the planet we all live on.

Monument status ensures that the unique ecological, historical, scientific, educational, and cultural resources contained within remain a national priority for protection and research. It also provides international, national, and local recognition of an area of special significance.