A Day in the Life of East Island Exiles

How we stayed sane on the smallest island field camp in the Northwestern Hawaiian Islands. 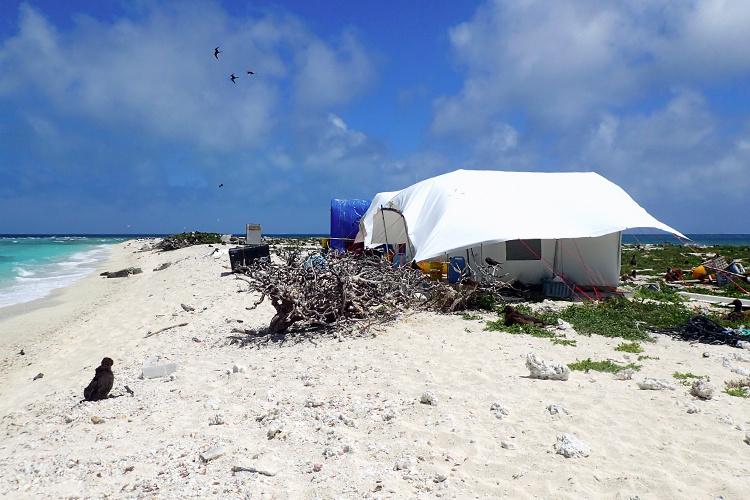 The field research camp on East Island, French Frigate Shoals, in the Northwestern Hawaiian Islands is home to two scientists for 4-6 months. They survey the island nightly to count the number of females that come up to nest each season. The surveys began in 1973, making this one of the longest-running sea turtle research projects in the world. Photo: NOAA Fisheries/Jan Willem Staman.

Imagine this: You wake up on a cot, under a canvas tent, and blink your eyes, wondering where you are. As you remove your ear plugs, the dull sound of birds nesting under your tent becomes a cacophony of screams, honks, and wails, and the afternoon sunlight streaming through gaps in the tent walls burns your eyes. It’s hot, you’re exhausted, and yet you smile, because you finally remember that you’re on East Island, and in the middle of the greatest adventure of your life. 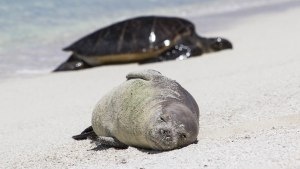 East Island, our home for the majority of our summer up at French Frigate Shoals in the remote Northwestern Hawaiian Islands, is only about 2000 feet long and 400 feet wide. Because of its size and our initial impressions from satellite images, we originally dubbed our future home a “sand bar,” devoid of life. But upon closer inspection we found the island to be rich with birds, Hawaiian monk seals, vegetation, and of course, sea turtles. Even the beautiful turquoise water surrounding the island, our front yard, provided us with daily sightings of schooling trevally, foraging eagle rays, and huge tiger sharks, patrolling the shallow lagoon waters for disoriented albatross fledglings that landed on the water while learning how to fly. With the gorgeous scenery and wildlife keeping us company every day, it was easy to fall in love with our tiny island home. 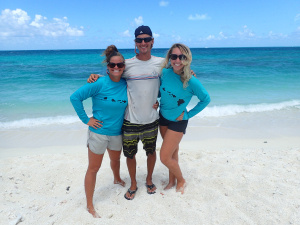 But what brought us to East Island? My husband, Jan Willem Staman, and I, along with our colleague Alex Reininger, made up the three-person Sea Turtle Research Team in the Northwestern Hawaiian Islands with the NOAA Fisheries Marine Turtle Biology and Assessment Program. It was our job this summer to set up a camp on East Island and study the hundreds of sea turtles that come to this small island to reproduce. While it is not known why approximately 96 percent of Hawaiian green sea turtle nesting takes place at French Frigate Shoals, we are learning more and more about this phenomenon with each passing field season. This season, we identified 871 individual male and female turtles with a small white number we gently painted onto their shells. On East Island alone we counted 413 females that came up to nest this season, more than last year’s 87 but less than the banner year of nearly 900 in 2014 (because turtles nest every few years, every population has natural seasonal highs and lows depending on which turtles decide to make the migration and nest). Along with numbering each turtle, we also gave each one small flipper tags and took their measurements to track their growth. Since researchers have been tagging in Hawaii for several decades already, it was exciting to find turtles that had tags from 10, 20, and even over 30 years ago!

Because sea turtles nest at night, we had to adjust our sleeping schedule to make sure that we would be awake when the turtles were most active. That meant that our work day actually started around 4 p.m. in the afternoon. Just like in the main Hawaiian Islands, the sea turtles at French Frigate Shoals would haul out onto the beach during the day to bask, or rest in the sun. From 4-6 p.m. we would walk around East Island and record all of the turtles we saw based on the white numbers we wrote on their shells. On our very first day on East Island, we walked around the island and counted 229 basking sea turtles! However, that number steadily declined throughout the summer as more and more females finished laying their eggs and returned to the main Hawaiian Islands. Those females, with our white numbers still on their shells, have now been seen back around the main islands and have become a part of a unique citizen scientist project recently announced by NOAA!

Learn more By the Numbers, Green Sea Turtles in Hawaii 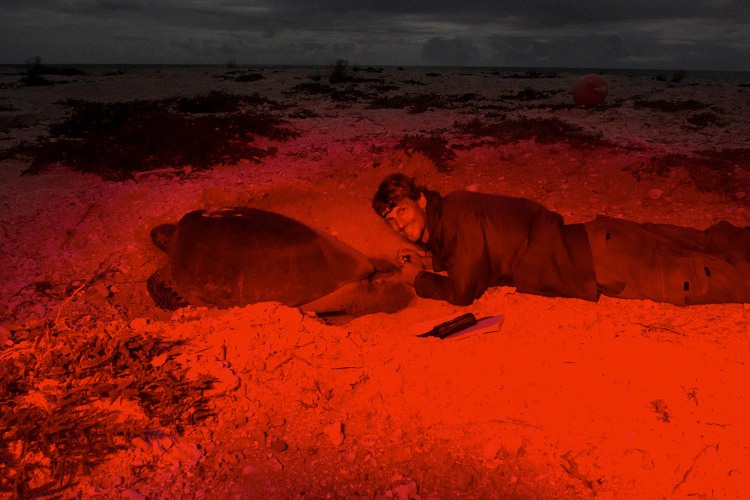 The sea turtle research team didn’t need headlamps to see the turtles crawling up to nest when the moon was up. Photo: NOAA Fisheries/Jan Willem Staman.

After completing our afternoon survey, we would spend a few hours transcribing the data and eating dinner before starting our night survey around 9 p.m.. While in theory walking around a deserted island at night may sound spooky, there was actually so much going on that we didn’t have time to get creeped out. In addition to the dozens of nesting sea turtles crawling out each night, we also encountered sleeping monk seals and restless birds, all lit up by the most impressive display of stars I have ever seen. When the moon was up we didn’t even need headlamps, and when the moon was set, the darkness allowed the stars to light up the whole sky instead. We spent so much time on our night surveys looking for turtles on the ground, that I’d occasionally remind myself to look up, and the night sky always took my breath away. 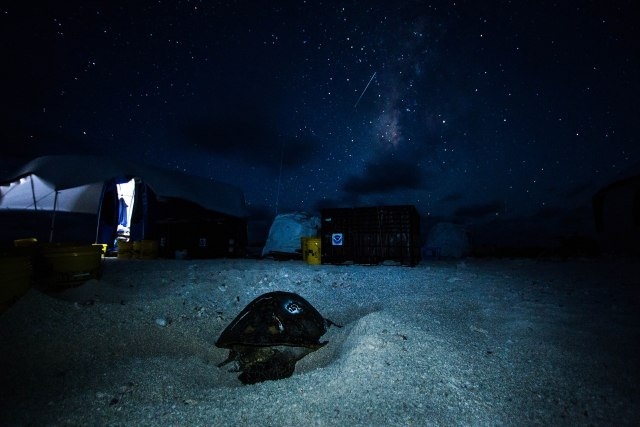 When the sun began to rise on the horizon, it meant it was time to do one last lap around the island and head back to the tents. After 8-9 hours of walking laps around our sandy island, the biggest and completely unanticipated challenge we faced each day was still to come: trying to sleep! Between the loud birds and the hot sun, sleeping more than 2-3 hours in a row became a notable achievement around camp and something I do not take for granted now that we’re back here in Honolulu. 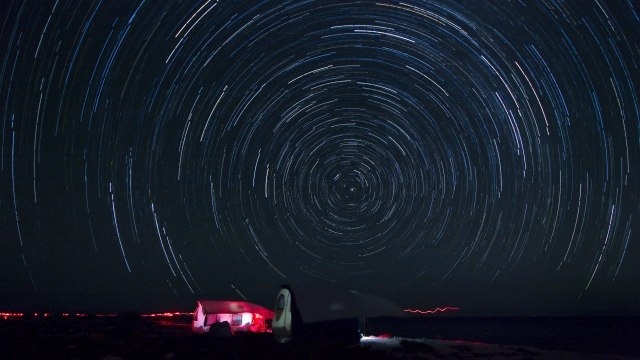 The stars shone a little brighter over East Island, where the only other light came from red headlamps the researchers wore during surveys. Photo: NOAA Fisheries/Jan Willem Staman.

Jan Willem and I returned to Honolulu at the end of August and have been busy entering all of the data we compiled over the summer. In order to collect another month of nest data, Alex bravely stayed behind on East Island alone, with daily check-ins from the nearby monk seal camp on Tern Island. Sitting behind a desk in a cubicle is definitely not as adventure-like as carefully sneaking up behind nesting turtles to count their eggs, but we do value the data and enjoy the memories it elicits.