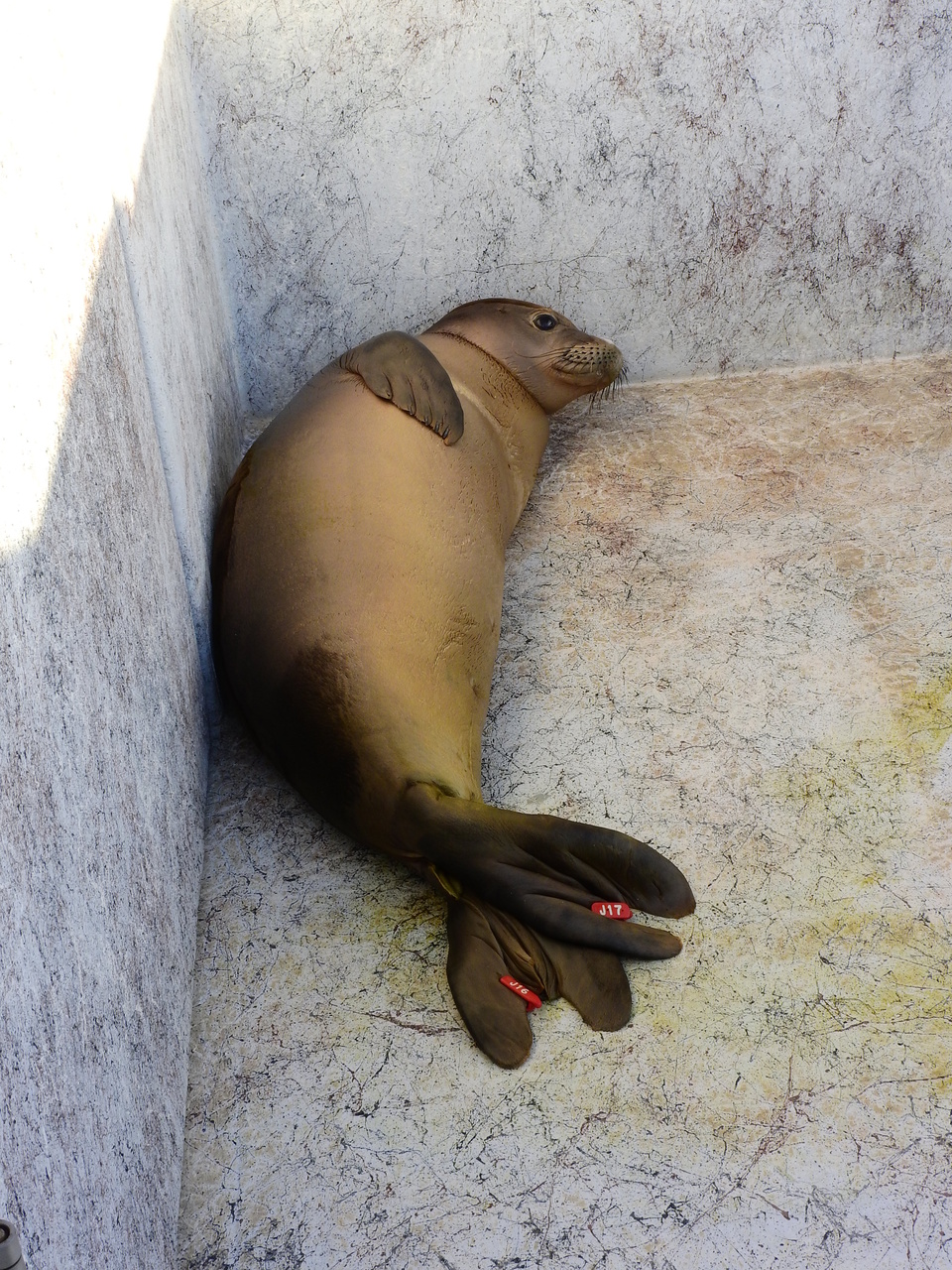 It’s normal to feel a little out of your depth when you first start a new job. You’re meeting new coworkers, facing new challenges, navigating a new work space, figuring out your new role within a team, and learning to work within a job culture utilizing a new decision-making process. This was especially true for me as I recently began work in a new position with the NOAA Fisheries Hawaiian Monk Seal Research Program. A significant part of my duties is to work with the monk seal emergency response team in the main Hawaiian Islands, and I was thrown in to the deep-end with an emergency response over Christmas and the New Year. I’d only been on the job a few days when we got the initial call from our partners, the Hawaiian Marine Animal Response (HMAR) volunteer network, that a male weaned pup was exhibiting logging behavior off the beach at Turtle Bay and was being pushed into the rocks by heavy surf. An observant member of the public reported the unusual behavior to HMAR, which was then passed along to NOAA.

Being new to the team, I was faced with a lot of questions about the decision-making process. I am sure many of you have also wondered what exactly goes into a monk seal capture event. So, I thought I would share some of our team’s process with you.

What do we look for when we decide to capture a seal?

Kahulu (RJ16) was first reported to NOAA staff as a concern by HMAR volunteers the day after Christmas, 2017. He was exhibiting “logging” behavior, meaning that he was just floating on the surface, not actively swimming, or responding normally. Logging behavior happens from time to time in healthy animals, but extended periods of logging are often symptomatic of underlying health problems. In the past, monk seals have exhibited logging behavior due to bite wounds (most likely from sharks), swallowed fish hooks, or diseases such as toxoplasmosis. So logging behavior alone does not tell us what is wrong, but that we need to investigate.

How long do we observe before we decide to act?

Every seal is a little different. We consider each case individually and make a decision based on previous experience and case-specific information. In this case, the NOAA veterinarian was very concerned about his behavior and decided that it was important to bring him in for a full physical examination and, possibly, treatment. A trained NOAA response team was sent out the next day. 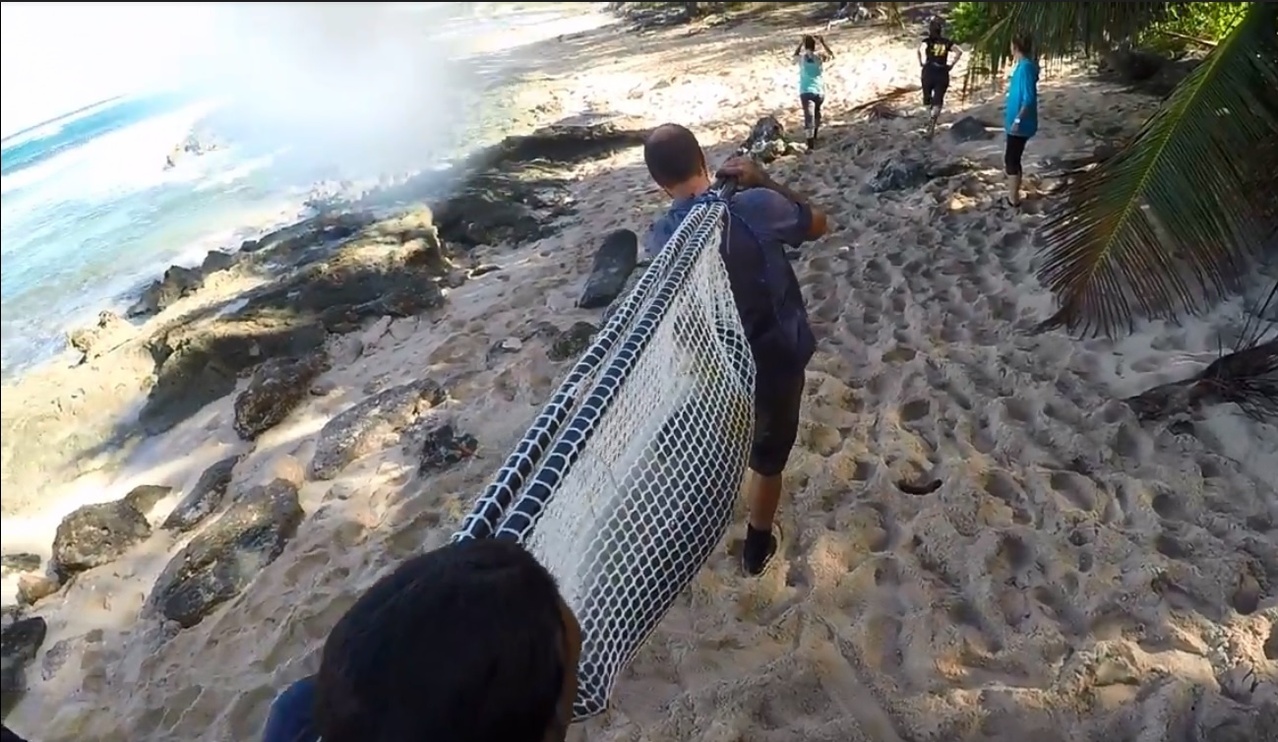 What factors drive those decisions?

Capturing seals is never simple or risk-free. RJ16 was off shore in heavy surf along a rocky stretch of coastline. Not only did we have to think about the animal’s health and safety, we also had to insure the safety of our team. RJ16 may have just been a weaned pup, but trying to coordinate a team of people to capture a 209-lb (95 kg) wild animal while clambering through pounding surf and surge and walking on sharp, rocky substrate is no easy task. We were also leery of putting him at risk. We had to find a way to catch RJ16 without hurting him or any of our team, and he wasn’t going to make it easy for us.

What level of risk are we reasonably willing to accept in order to capture an animal?

The team was unable to catch RJ16 on Wednesday, as he was still too far off shore. So, we watched him closely, looking for behavioral clues or indications of injury, anything that might help us know what exactly was wrong, and waiting for our chance to attempt a capture. As time went on and RJ16’s behavior didn’t improve, we grew more concerned. The risk to RJ16 was increasing. We decided to take more proactive tactics.  If RJ16 wouldn’t come to land, our team would have to get in the water.  This meant greater risk to staff, so we had to ensure that we could safely undertake a rescue. 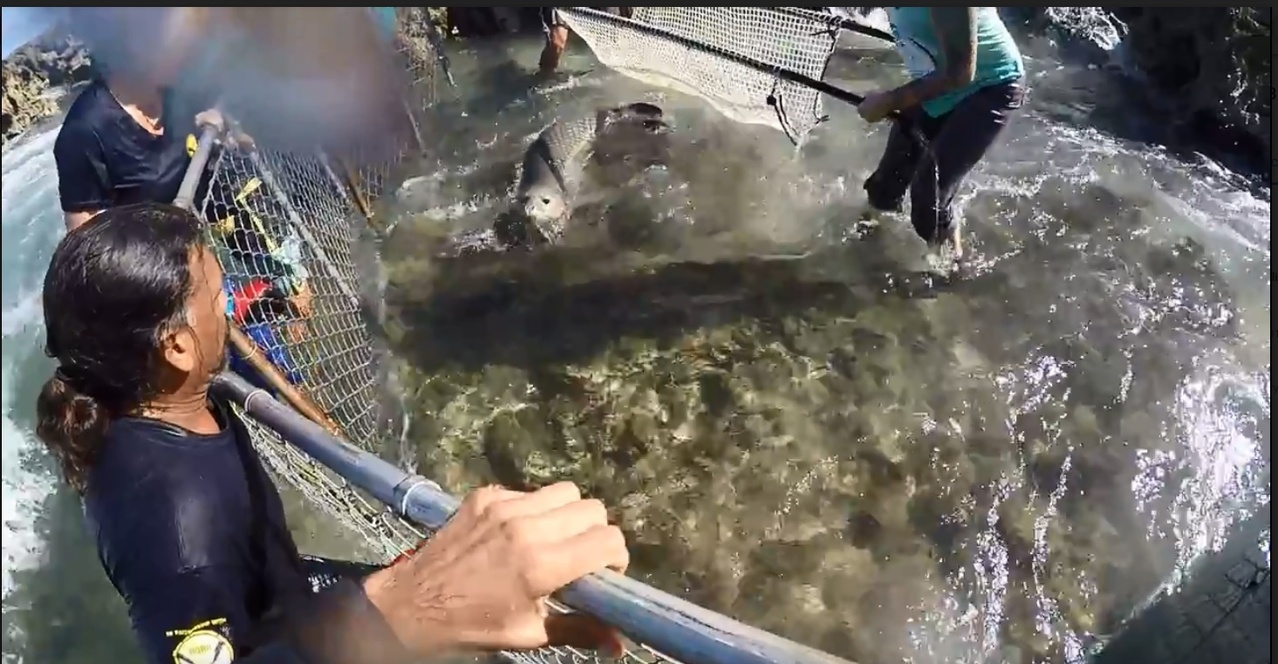 What gear do we need for a specific capture? How many team members do we need?

We ramped up our effort with more people and more gear to increase our chances of a safe capture despite the challenges of the surf zone. More team members arrived, bringing with them a stack of 3- by 4-ft. panels of chain-link fence, a large floating mat often used to catch dolphins, crowding boards, and various other implements we hoped could be used to capture RJ16.

When RJ16 finally drifted into the small rocky cove, the response team moved quickly into action; the fence panel teams (8 people) entered the water and closed in around the seal, cutting him off from the open sea. On the capture team, my partner and I entered the watery corral with RJ16, carrying our stretcher net between us. RJ16 made attempts to slip through the fence panels, but we found our footing and carefully scooped him up in the stretcher net. From there it was a matter of minutes to get him safely out of the water, loaded into a transport kennel, and whisked off to the live animal care facilities at the NOAA offices. 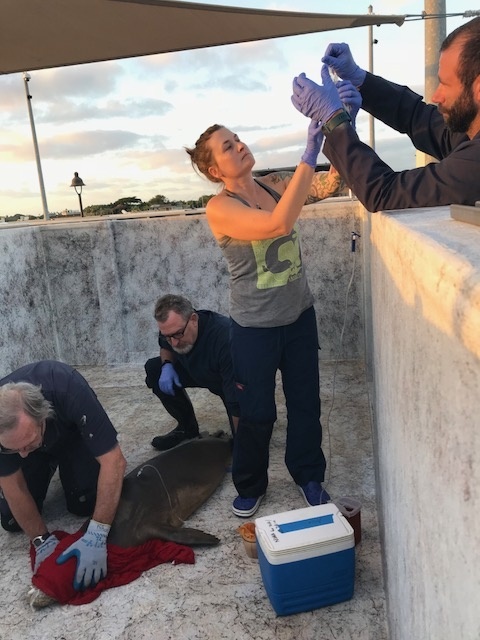 How do we figure out what’s wrong with a seal?

With RJ16 in our care, our priorities were to stabilize his condition and provide him with fluids and medication (antibiotics). Then we needed to find out what was wrong in order to help him. The NOAA veterinarian conducted a full physical examination. We took blood samples to look for abnormalities in blood cells and blood chemistry and to test for exposure to several diseases. We took x-rays to rule out internal injury or foreign bodies such as fish hooks, and to look for signs of pneumonia. RJ16 was even given an ultrasound to evaluate his organs.

We did not find any signs of foreign bodies or trauma, and his organs appeared normal; however, RJ16 had very low counts of white blood cells, and was anemic (low red blood cell count). We surmised that he was fighting an infection, though we still didn’t know exactly what sort. 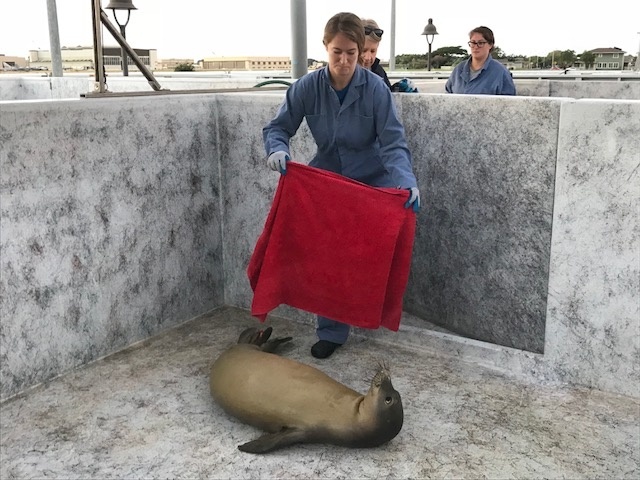 How do we care for a sick seal?

After his exam, we made every effort to make him comfortable and to minimize stress in his new environment, which included a shaded cover and a shallow pool in which he could splash and cool down. We used overhead cameras to monitor his behavior, voluntary movement, and responsiveness during and between treatments, allowing us to keep a close eye on the seal without causing undue stress or affecting his behavior. At the very least, he could rest and attempt to heal as the veterinary team worked to pinpoint the cause of his illness.

Through the New Year’s weekend, dedicated teams of animal handlers prepped fish mash slurry for his meals, tube-fed him three times a day, and administered fluids and medications [Antibiotic medications (multiple, given orally, in muscle and intravenously), Antiprotozoal medications, supportive medications such as fluids, fish slurry, gastro protectants (Pepcid)] to fight against the most likely illnesses. 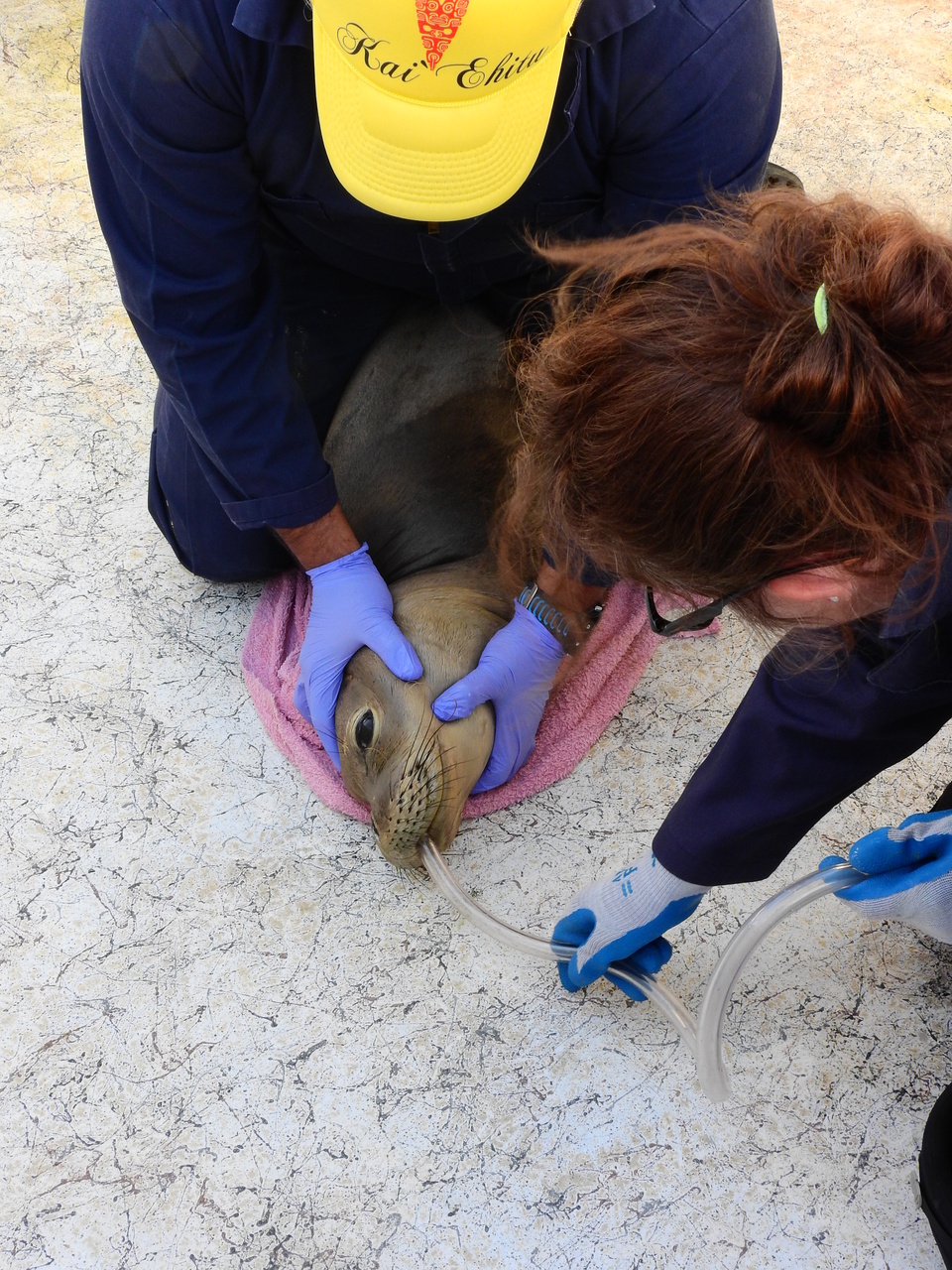 Tube feeding RJ16 with a mixture of fish mash, antibiotics, and vitamins during this treatment at a NOAA facility (Photo: NOAA Fisheries).

And what can we do when things don’t work out the way that we’re hoping?

Despite the tireless efforts of a team of more than 15 staff members and volunteers spanning a week of care and hours of observation, RJ16 passed away on January 5, 2018.  His loss was a shock to us all. Though we knew he was in rough shape, we were all hoping he would pull through. Each member of the team roots not just for RJ16 but for each seal in the population, and losing one hurts.

The best way to move forward after such a loss is to try to learn lessons that will help the rest of the seals.  Necropsies and tissue collection are standard protocol for any monk seal death, but because RJ16’s passing was such a mystery, we spent extra time and effort and collected more samples than we normally would. This process took two veterinarians and five assistants more than four hours to complete. The samples were then sent to diagnostic labs for numerous tests.

We know that RJ16 ultimately succumbed to mortality from a secondary infection that his immune system and our best medicine could not get under control. However, the more important question is what caused the immune system to be so compromised in the first place, leading to his susceptibility to secondary invaders. The abnormalities in RJ16's case have the veterinary team scratching their heads because they do not align with common diseases of monk seals (or even other pinniped species). We do not think RJ16 died of any better-studied diseases such as those from protozoa (including Toxoplasma gondii), Brucella, Leptospira, Morbillivirus/distemper, or non-infectious diseases like cancer. We are at the stage of this post-mortem investigation where we are looking at more unusual possibilities using molecular techniques and electron microscopy. Ultimately, we may never know exactly what caused RJ16's illness but we're going to keep trying.

How do we move forward from a loss like this? We try to learn from the experience and we try to improve for the next emergency. What can we, as a team, take away from the tragic experience?

First, we know that catching animals out of the water is strategically challenging and poses risks to both the team and the animal. However, this case has taught us that it is possible to make a safe in-water capture, given enough personnel, the right equipment, and a good plan.

Second, this experience highlights the importance of careful monitoring and rapid communication by our volunteers. The sooner we are aware of a problem, the sooner we can take opportunities for a safe capture and begin care.

And finally, every monk seal response is different. We may never really know what was going on with RJ16, but we can use his tragic loss as an opportunity to improve our tactics, to hone our skills, and to be better prepared the next time a monk seal needs our help.

All photos taken under a NMFS research permit.