Saving Seals in the Northwestern Hawaiian Islands During Hurricane Season 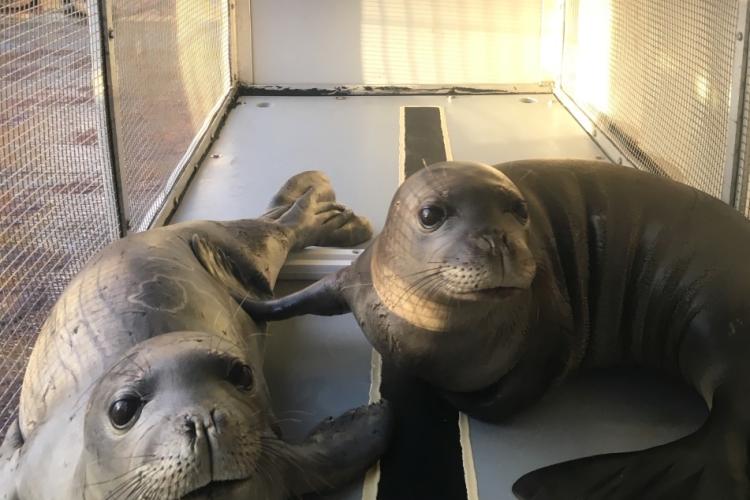 We are very thankful that none of the hurricanes in this yearâs hefty line-up threatened the safety of our monk seal campers on the small low-lying Northwestern Hawaiian Islands. Even in fine weather, itâs a long transit between recovering the field camps and bringing underweight Hawaiian monk seals to The Marine Mammal Centerâs Ke Kai Ola monk seal hospital in Kona, Hawaii. Two storms in a row tend to complicate logistics. At least nine months out, we had scheduled the ship to depart Pearl Harbor on August 22ndâbut that was the day Hurricane Lane was forecasted to hit Hawaiiâand to return on September 14thâjust in time for Hurricane Olivia. Needless to say, we had to make a few adjustments to keep the ship, crew, and seals safe from these storms.

This radar map shows the line up of three hurricanes heading toward the Hawaiian Islands â all during the monk seal field camp recovery mission. Olivia developed up shortly after.

On August 22nd, the island of Oahu was bracing itself for the impact of Hurricane Lane, including our two NOAA ships, which were restricted from leaving Pearl Harbor until the storm passed. Our monk seal biologists and veterinarians work hard to care for the young, malnourished seals we pick up from camps and take to the hospital for rehabilitation, but our delayed departure (while necessary and prudent for the safety of the ship, crew, and seals) meant less time in the Northwestern Hawaiian Islands to find and capture as many rehab candidates as possible. The Sette embarked six days later, once the seas were safe to sail. Our field team had identified two underweight weaned seal pups, both from Laysan Island: female âWK04â and male âWK40.â

Itâs always an adventure sailing with seals aboard a ship! From preparing fish smoothies on the high seas, to watching baaaa-ing seal pups around the clock, to swabbing a (literal) poop deck. Just as the new patients arrived on the ship, so did news of a storm system forming in the eastern Pacificâone we would soon know as Hurricane Olivia. The storm was coming toward the islands, and toward our shipâour ship with two endangered animals onboard.

For the veterinary team, the top concern was keeping the seals comfortable and stable during transit. The seals have never seen or heard sounds from the ship which, combined with the newness of their holding, can be quite stressful. We observed the seals around the clock, which was essential for monitoring their stress levels. In order to minimize stress and provide enrichment, we gave them access to two cages and large blocks of ice to play with!

To avoid Olivia, the Sette changed course and sailed directly home to the shelter of Pearl Harbor. That meant that seals WK04 and WK40 were still onboard, still awaiting delivery to Ke Kai Ola in Kona. Our veterinary technician, Angie Kaufman, and Ke Kai Ola animal care manager, Megan McGinnis, remained on the ship with the seals, feeding and caring for them, and ensuring all was secure throughout the storm. Luckily for our seals and much of the Hawaiian chain, the weather remained mostly calm with a few showers, allowing us to fully care for the seals. In the absence of everyday ship operations, the seals got some much-needed rest, sleeping through the whole storm.

The veterinary team coaxes WK40 out of her cage for a feeding as storm clouds gather in Pearl Harbor. (Photo: NOAA Fisheries)

After the storm passed, the mission still had two days at sea left before the next mission was underwayâjust enough time to run the two seals to Ke Kai Ola. To complete this trip in two days, the crew made special concessions to work in the wee hours of the morning of the Setteâs arrival. So, at 2:30 a.m. on a pitch black ocean with the lights of Kona and Ke Kai Ola in the distance, the crew mobilized. The seals were extra vocal, none too happy to be awoken from their nightâs rest. 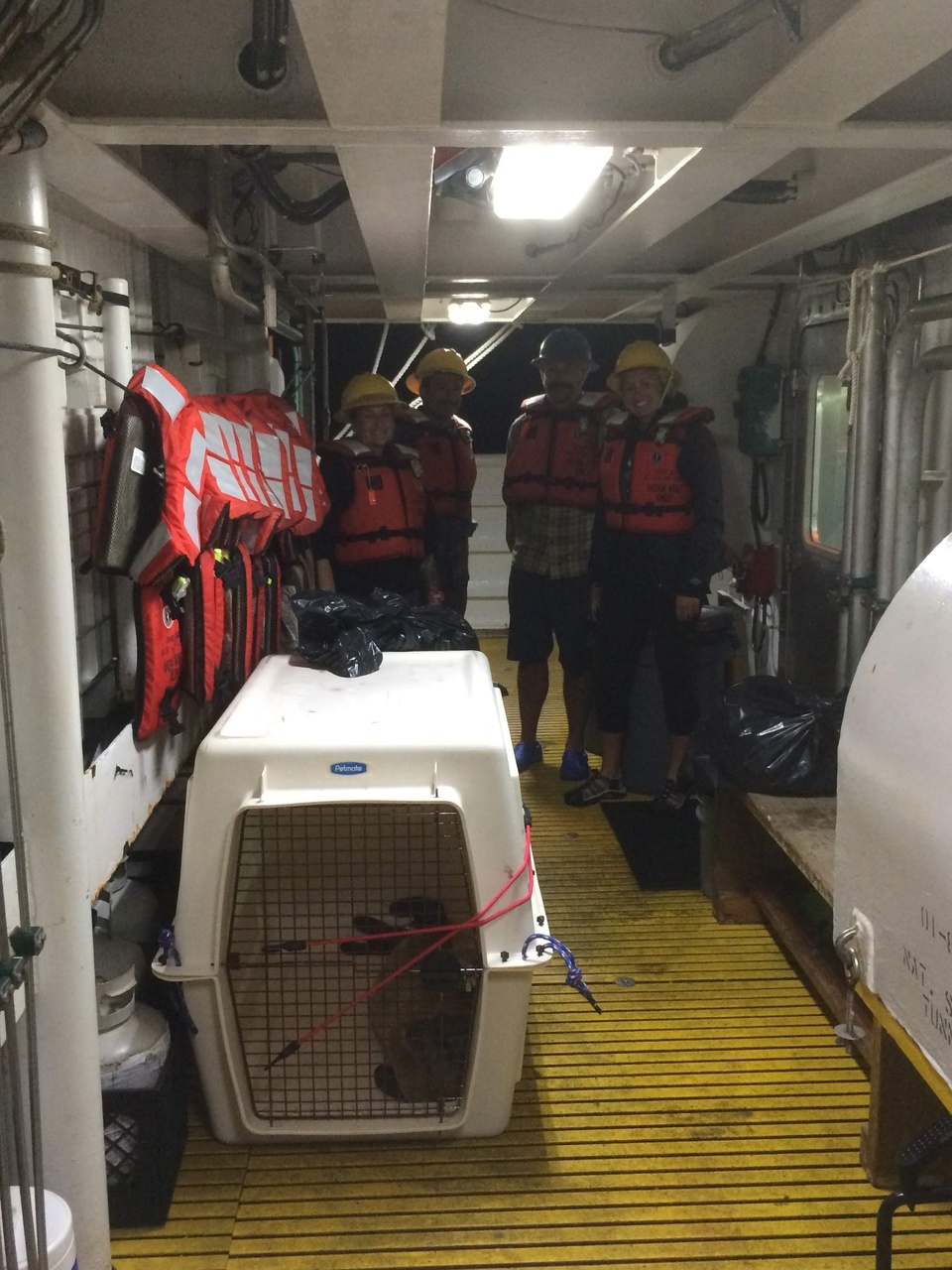 Step one: Scientists and seals wake up to load seals into transport carriers for their mid-night transfer to rehab. (Photo: NOAA Fisheries) 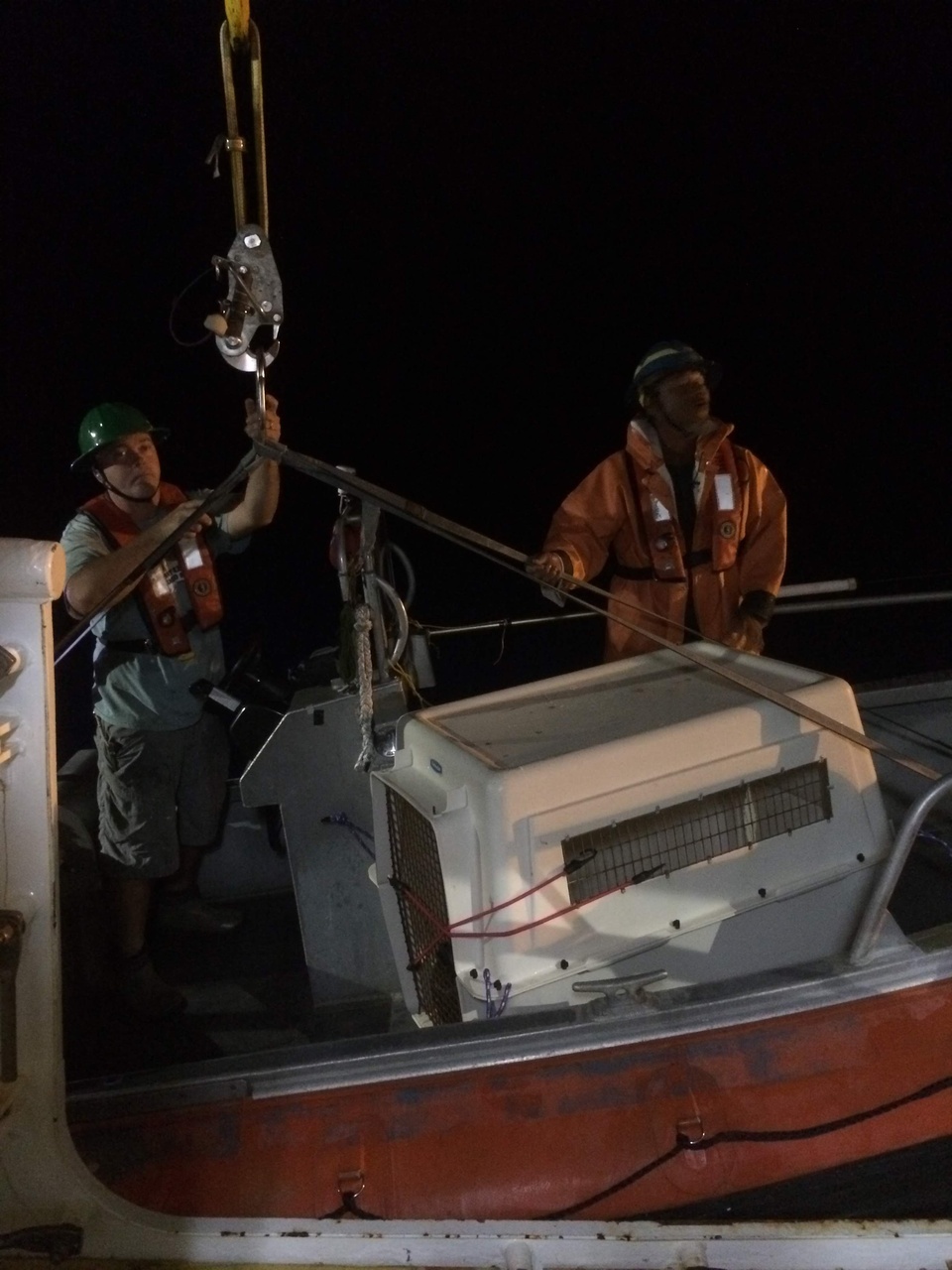 Step 2: Vet team escorts load seal carriers into the Setteâs small boat, which is carefully lowered into the water. Here is WK04 on her way to the harbor. (Photo: NOAA Fisheries) 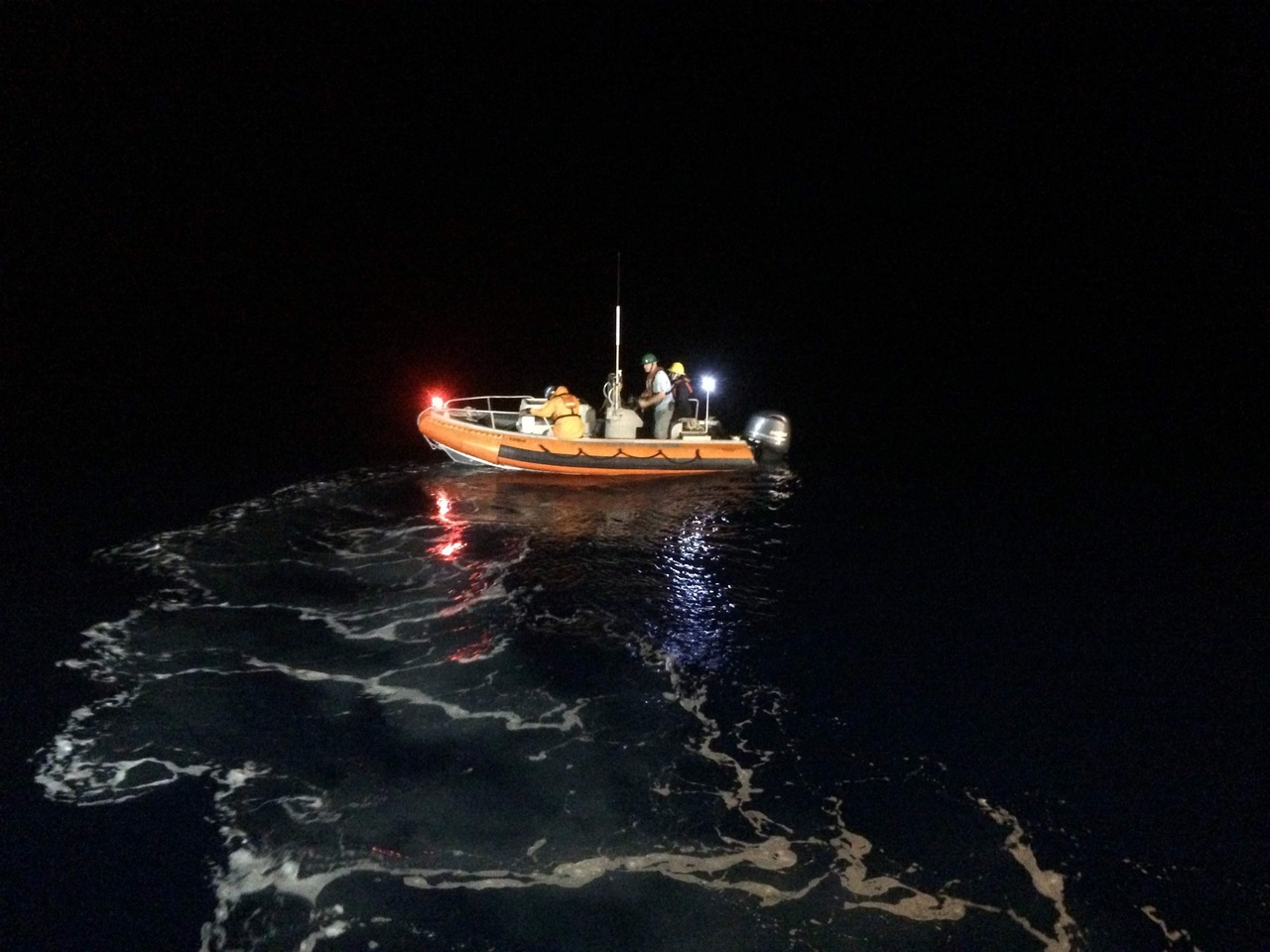 Step 3: The Setteâs small boat unhooks the lines that tether it to the ship and takes off into the night to deliver seals to Ke Kai Ola staff waiting at the harbor. (Photo: NOAA Fisheries)

Thanks to the experienced team of shipâs crew and biologists, the nighttime seal transport went smoothly, and the two Hawaiian monk seal pups were settled in to Ke Kai Ola before the sun rose.