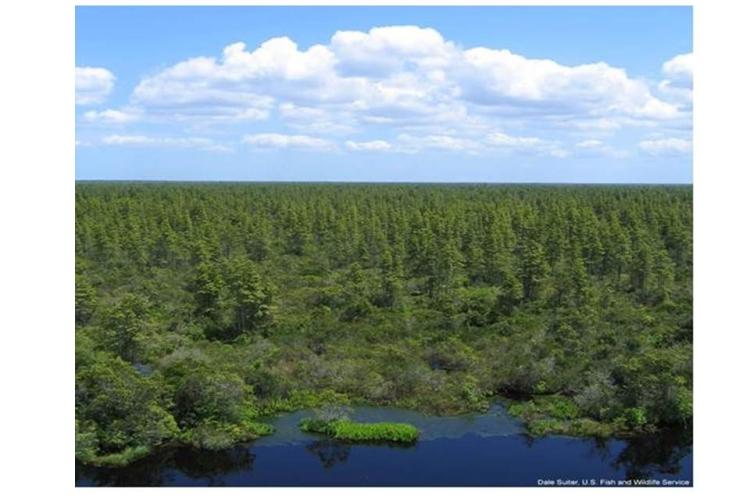 A rare type of shrubby, forested freshwater wetland characterized by a perched water table and no flowing source of water, most pocosin acres are found in the Carolinas, but range from Virginia to Florida.  Pocosins, an Eastern Algonquian word meaning “swamp-on-a-hill,” have been developed into forest plantations (silviculture), agricultural, commercial or residential areas across much of the Southeast.  Many remaining pocosins are still under threat of development.  In North Carolina alone, pocosin acreage exceeded 2 million in the 19th century, but by the late 20th century was less than 700,0001.

Pocosins are broad, low-lying shallow basins that do not drain naturally.  Although usually wet due to poor drainage, during seasonal dry periods the peaty soil may easily burn.  Fire, therefore, figures prominently in the ecology of pocosins, maintaining shorter plants and shrubs as the dominant vegetation in most areas and allowing only select species of taller hardwood trees, such as bay and white cedar, to reach maturity but not proliferate.  This leads to a noticeable plant height difference among pocosins – shorter and shrubby versus taller and treed. Several distinct plant types are found there including insectivorous plants like pitcher plants, sundews, and venus-flytrap that have adapted to the nutrient poor acidic soil by augmenting their nutrition with the ingestion of bugs.

Permits issued by regulatory agencies, such as the U.S. Army Corps of Engineers, to construct in freshwater wetlands, including the rare pocosins, may require mitigation for impacts deemed unavoidable.  Mitigation involves creating new wetland acres in the same watershed to replace the areas developed, replacing the same type of habitat and ecosystem functions.  Permittee responsible mitigation is costly and historically unsuccessful at fully replacing the same habitat acres and ecosystem functions – especially when done on a small scale.  Mitigation banks conduct large-scale mitigation projects to compensate for many projects and undergo rigorous oversight with measurable performance standards.  Mitigation banks then allow project permittees to purchase applicable mitigation credits to compensate for the impacts of their development – ideally achieving construction efficiencies and mitigation more effectively.

The Habitat Conservation Division has assisted in the development and post-construction inspection of two mitigation banks now offering pocosin mitigation credits within the Edisto River drainage basin in South Carolina.  Pocosin areas, which had been developed into pine plantations during the last century, were restored with bay and cypress trees and with fetterbush, a typical pocosin shrub.   Both projects have the potential to improve water quality within the Edisto River, a proposed critical habitat for Atlantic sturgeon.