There is some evidence that recompression may greatly increase the survival of barotrauma-injured rockfish. 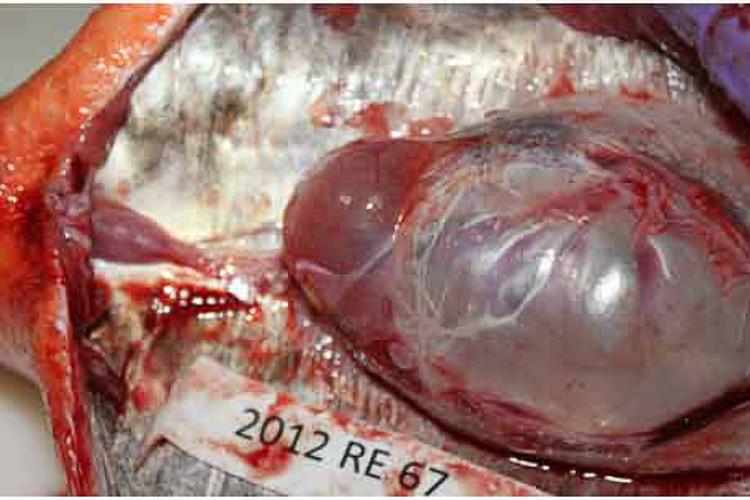 Figure 2. Photograph of an inflated rougheye rockfish swim bladder after capture, repressurization, and holding in the laboratory for 1.5 years.  Note the herniated red area on the left side of the swim bladder, which is likely a healed barotrauma. 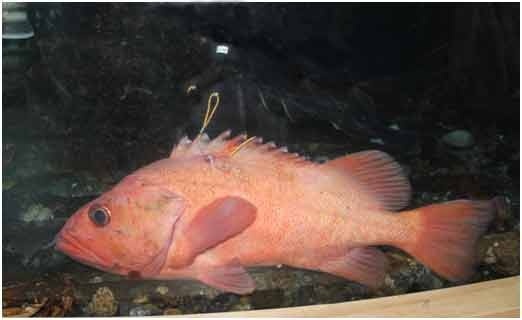 Figure 3. Rougheye rockfish that has been caught, repressurized, held in the laboratory for 1.5 years, and fitted with a satellite tag.

Because rockfish (Sebastes spp.) are physoclistic, i.e. their gas bladders are closed off from the gut, they often suffer internal barotrauma injuries from rapid air expansion in their tissues when brought up from depth.  Many rockfish released at the surface do not survive, either because they cannot submerge due to excessive buoyancy or because of internal damage.  There is some evidence that recompression may greatly increase the survival of barotrauma-injured rockfish.  However, survival can be species-specific; therefore, it is important to gauge the impacts on each species of interest.  Research completed during 2010-12 demonstrated that rougheye rockfish (S. aleutianus), caught at depths from 500 to 900 ft and exhibiting barotrauma, can survive if recompressed after capture.  This result is noteworthy because it is the deepest known successful capture and recompression of any rockfish species, which suggests there is potential to conduct scientific tagging studies to track movements and behavior of deepwater rockfish species.

All fish brought to the surface exhibited some external signs of barotrauma including exophthalmia (“pop-eye”), an everted esophagus, and ocular emphysema (air bubble under the cornea).  In 2011 and 2012, we tagged and released 130 fish at approximately 200 ft, and 46 others were recompressed in portable pressure tanks and slowly brought back to surface pressure.  All but one fish were brought to surface pressure over approximately 48 hours.  Using a 48-hr schedule, no fish larger than 54 cm survived.  One large fish was given roughly 96 hours in the tanks and survived with the longer depressurization schedule.  After repressurization in the tanks, fish no longer had exophthalmia or an everted esophagus.  In many cases, ocular emphysema also disappeared.  Of the 46 fish, 23 survived long-term and were monitored in the laboratory through January 2013.

In January 2013, 21 of the 23 surviving fish were sacrificed.  Eyes and internal organs were observed for signs of previous barotrauma.  In addition, gonads were sampled for histological slide preparations to examine maturation.  As of this writing, slides are still being prepared, but to the naked eye gonads did not appear to be maturing, even though we would expect gonads to be maturing and enlarging in preparation for spawning in January.  Many fish had repaired swim-bladders that were holding air (Fig. 2).  Two of the larger surviving fish (54 and 65 cm) were fitted with non-functional satellite tags and held in the laboratory to determine if larger rougheye rockfish could tolerate these tags.  After a duration of 2 months, both fish survived and were negatively buoyant (Fig. 3).  One was sacrificed in March and the other is being displayed in an aquarium.

In 2013 plans are to sample in the same area that was sampled in 2011 and 2012 to look for tagged fish and to deploy satellite tags on additional rockfish captured with longline gear.  The objectives are to determine if released fish can survive being caught, tagged, and returned to depth.