Why This Closure is Happening:

This bulletin provides only a summary of the existing regulations.  Full regulations can be found in the Federal Register or at http://www.ecfr.gov.

When will recreational Atlantic migratory group cobia (Georgia through New York) be closed?

Who will be affected?

Why are the landings higher in recent years?

Why is a closure occurring if most landings are from state waters?

Why does this closure not apply to fishermen off the east coast of Florida? 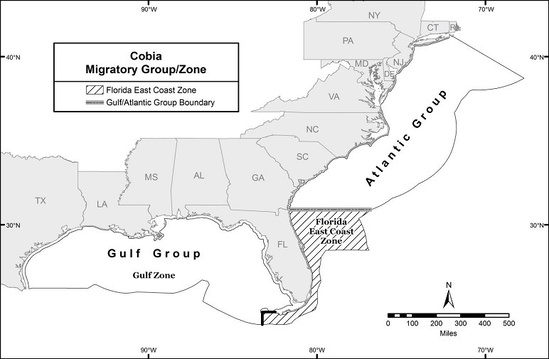 Will the closure for cobia apply to commercial fishermen?

What is the status of the population?

Can I fish for cobia in state waters?

Are new regulations being considered to extend the federal fishing season in 2017?

How can I get more information about the in-season closure?

NOAA Fisheries Southeast is pleased to announce the introduction of our Text Message Alert Program.  The program will allow you to sign up to receive important fishery related alerts via text message. Text alerts you may receive include immediate fishery openings and closures, and any significant changes to fishing regulations that happen quickly.

Sign up for related alerts for one or more of the following groups. Standard message & data rates may apply. You may opt-out at any time.