Lobster fishing is prohibited in Lobster Conservation Management Area (LCMA) 4 during this seasonal closure.  Federal lobster permit holders may not possess or land lobster taken from LCMA 4 from April 30-May 31, 2020.

If you have a Federal lobster permit, you must remove ALL trap gear from LCMA 4 prior to April 30, 2020, regardless of the species targeted.  Federal trap fishers may not haul, set, store, abandon, or in any way leave their traps in LCMA 4 waters during the seasonal closure.

Lobster fishermen have a 1-week grace period from May 24 – May 31 to re-set gear in the closed area.  During the grace period, re-set traps may not be hauled and no lobster may be possessed or landed.

Federal lobster permit holders may fish trap gear in other lobster conservation management areas (such as LCMA 3 or LCMA 5) during the closure, if their vessel has a valid trap allocation for those areas.

Federal lobster vessels may transit LCMA 4 during the closure, to reach a destination outside of LCMA 4, if all trap gear is stowed aboard the vessel.

We implemented this May closure in 2015, consistent with the Atlantic States Marine Fisheries Commission’s Interstate Fishery Management Plan for American Lobster.  The May closure replaced the previous LCMA 4 lobster closure that ran from February 1-March 31.  That period is open to lobster fishing and trap gear.

The chart below shows the LCMA 4 closure area and the adjacent lobster conservation management areas.

Please be aware that where differences exist in regulations between different states or different areas, the most restrictive rule applies.  Please contact either your state agency or us at (978) 281-9315 with questions. 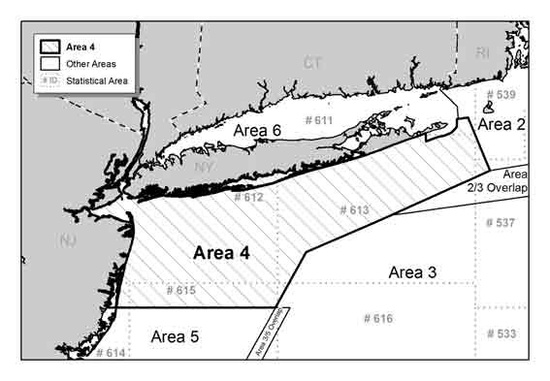