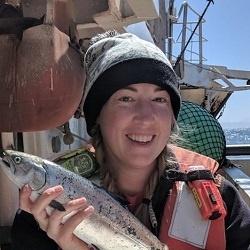 Abby received a B.S. (2007) and M.S. (2015) in Aquatic and Fishery Sciences from the University of Washington (UW). She started at NWFSC in 2006 as an undergraduate intern at the Manchester Research Station helping to investigate behavioral differences between hatchery and wild steelhead. In 2008 she worked at Big Beef Creek Field Station rearing coho salmon for research experiments at UW.  In September 2008, Abby joined the environmental physiology team in Seattle and currently manages the hatchery freshwater recirculation system which houses both coho and Chinook salmon.