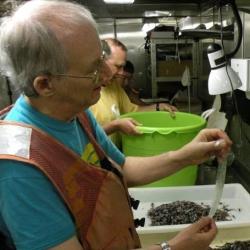 Bruce Mundy is an ichthyologist and fishery biologist who worked for NOAA Fisheries in Honolulu for 33 years before retiring in early 2019. His work included, among other things, studies of larval fish distributions, larval fish identifications, coral reef fish distributions at remote Pacific islands, and the distribution of deep-sea fishes. He was the scientific editor of the NOAA NMFS publication Fishery Bulletin in 2011–2014. In 2015–2017, he participated by telepresence in deep-sea surveys of the NOAA Ship Okeanos Explorer. Bruce continues his interest in ichthyology after retirement and has since been the coauthor for several papers that resulted from his work at PIFSC.