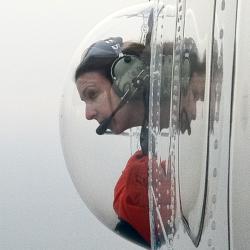 Christin Khan is a Fishery Biologist in the Protected Species Branch at the Northeast Fisheries Science Center in Woods Hole. She is an aerial survey observer on the North Atlantic Right Whale Sighting Survey, and leads a variety of collaborative innovation projects including the Geospatial Artificial Intelligence for Animals (GAIA) initiative to detect whales from very high resolution satellites (along with co-PI Kim Goetz), geolocation of on-demand fishing gear with the EarthRanger platform, and the use of artificial intelligence to individually identify North Atlantic right whales in Flukebook. Christin is also a subject matter expert on the NOAA Center for Artificial Intelligence executive committee.

Christin received a B.S. from Northeastern University in 1998, and a M.S. from San Francisco State University in 2004 on harbor seal vocal development. She discovered her love of both aerial surveys and right whales in 2005 as an aerial observer on the Southeast calving grounds and has continued to fly for various organizations ever since. Christin came to the Northeast Fisheries Science Center in Woods Hole as a contractor in 2008  was hired on as a full time employee in 2011.