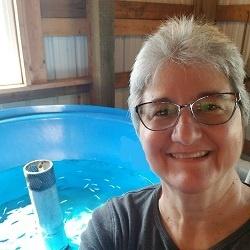 Debbie completed her A.A. in 1984 from Lower Columbia College in Longview, Washington and her B.S in Zoology in 1986 from the University of Washington. She joined the NWFSC's Manchester Research Station in 1990 as a fisheries technician researching the use of Passive Integrated Transponder (PIT) tags in salmonids, conducting several lab and field studies on behavior and survival. In 1994, she became a fisheries research biologist and joined the Redfish Lake sockeye salmon recovery program, overseeing the daily culture of these fish at the NWFSC's Big Beef Creek facility from 1994-2001 and at Burley Creek Hatchery from 2001 to the present.

In 2002 and 2003, she conducted research on the effects of a prototype acoustic tag on the growth, survival, and behavior of juvenile Chinook salmon. Results from this research contributed to the development and refinement of the acoustic tag for use in fish.

From 2000 to 2011, she was the NWFSC Collateral Duty Safety Representative for Manchester Research Station.

Debbie's research involves conducting the activities pertaining to the culture of the ESA-listed Redfish Lake (Snake River) sockeye salmon, overseeing feed rationing, PIT tagging, maturity sorting, spawning, and all the associated data collection. Data accumulated over the course of this project is being assimilated into various publications on sockeye salmon culture and broodstock management.