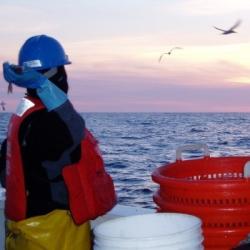 Eric's research has primarily focused on the role and contribution of economic analysis in fishery management policy and regulatory design. Recent projects included development and implementation of indicators of fisheries performance, risk assessment for fishing vessel safety, and measures of fleet diversity in the groundfish fishery. Current projects are analysis of changes in vessel ownership in the groundfish fishery, comparative analysis of coupled economic and ecological models, and methodological considerations in the collection and use of cost data.