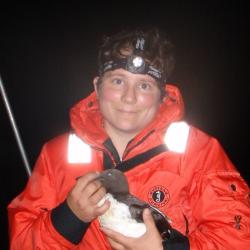 Her academic credentials include the following

• Ph.D. from University of California – Irvine

After completing her doctoral training, Jen earned a two-year NSERC Visiting Postdoctoral Fellowship with the Department of Fisheries and Oceans in Nanaimo, British Columbia, Canada; there she worked with Dr. David Welch and his team to study the ocean ecology of juvenile salmon.

As of 2014, Jen is involved in three primary research efforts. First, she is Project Lead for NOAA’s investigation of estuary predation of birds on endangered Columbia River salmon populations. Large breeding populations of Caspian terns (Hydroprogne caspia) and double-crested cormorants, (Phalacrocorax auritus) reside near the mouth of the Columbia River. Jen and other NOAA scientists are collaborating with Oregon State University, the US Geological Service, and Real Time Research to analyze impacts of birds on seaward-migrating juvenile salmon. Second, Jen is studying seabird diet, distribution, and behavior in the coastal ocean to understand where ecological “hot spots” are for marine wildlife, and why those locations are so important. Third, she is working to understand the ecology of protected Columbia River smelt (Thaleicthys pacificus), also known as eulachon. Declining returns of adult eulachon from the ocean to historical spawning grounds in the Columbia River prompted NOAA to list this fish as threatened under the Endangered Species Act in 2010. Jen is helping to develop fisheries-independent tools to study adult run size and timing, which will assist directly with eulachon recovery planning and implementation. Additional research interests include the ecological roles of plankton-eating fishes such as northern anchovy (Engraulis mordax), diets of juvenile salmon, and the use of fisheries hydroacoustics to study marine predator-prey interactions.