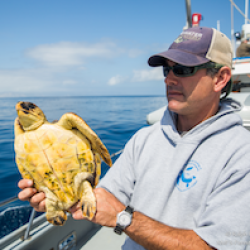 Jeff currently serves as the U.S. Delegate for the Scientific Committee of the Inter-American Convention for the Protection and Conservation of Sea Turtles . He is the Executive Editor of the professional scientific journal Chelonian Conservation and Biology, and serves as Editor for several journals: Endangered Species Research, Indian Ocean Marine Turtle Newsletter, and Sea Turtles of the Eastern Pacific (University of Arizona Press). Jeff employs innovative approaches in his research including stable isotope analysis, biotelemetry, animal-borne imagery, and aerial surveys, all of which elucidate the life history of sea turtles throughout the Pacific Ocean. His has authored over 140 peer-reviewed publications, and his research has been featured in numerous popular magazines and news outlets, as well as on the Discovery Channel, Animal Planet, PBS, and National Geographic Explorer. Jeff lives with his wife, Jennifer, and children, Quin and Graeson, in San Diego along with an assortment of pets including dogs, tortoises, lizards, and snakes.