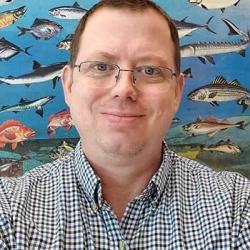 Ken joined NOAA Fisheries in 2008 as the first Information System Security Officer in the Alaska Region. Prior to joining NOAA Fisheries, Ken served in the United States Coast Guard for 22 years working in communications, search and rescue, and computer support. During that time he served in many locations across the United States and had varying duties including search and rescue assistance using Morse code in Kodiak and New Orleans, aviation communications at Air Station Kodiak, and shipboard radioman on an icebreaker out of Mobile. He currently spends the majority of his time chasing his grandson and attempting to make the seas calm by sheer force of will with limited success, so he can take his kayak out fishing.