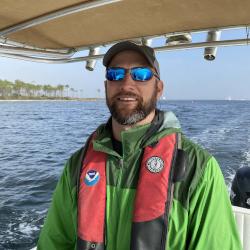 Kevin began his career as a contractor for NOAA Fisheries in Pascagoula, Mississippi after receiving his Master's degree from Louisiana State University in 2002. In 2004 he exclusively began studying marine mammals and became a NOAA employee in 2011. He has been directly involved in a large portion of the marine mammal field research projects that have occurred during his time with the Center.

Kevin has training and experience in conducting research from a variety of platforms, including aircraft, NOAA ships, and small boats. He has served as survey lead on numerous aerial abundance and distribution surveys in both the Gulf of Mexico and Atlantic Ocean. He has also led or participated in various Bay, Sound, and Estuary bottlenose dolphin research projects where he has training and experience in remote biopsy sampling, photo-identification, and as a small boat coxswain. Kevin maintains current certifications in CPR, first aid, HAZWOPER, HUET, and fast boat rescue.