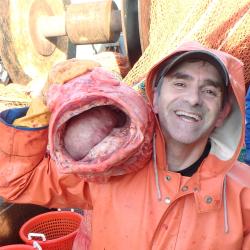 Mark has worked in the Groundfish Assessment Program (GAP) in the Resource Assessment and Conservation Engineering Division of the Alaska Fisheries Science Center since 1991. His work has focused on utilizing the spatial component of GAP data for analyses in Geographic Information System (GIS) software. For the second half of Mark’s career, he has focused on using GIS software to make accurate and detailed seafloor maps of Alaska.

No other area in the US EEZ is as vast, complex, and difficult to map as the Alaska seafloor, which has active faults, scouring and heavy sedimentation, volcanic eruptions and resultant ash accumulations, extreme tides and currents, shifting sand waves, isostatic rebounding from melting glaciers, areas too shallow and complicated to map such as the Sandman Reefs, trenches exceeding 7,000 m in depth, and areas that are seasonally unavailable due to winter ice cover. As a result, many places in Alaska are uncharted or poorly charted, leaving great, unknown gaps to fill. Thus, Mark has been compiling bathymetry data sets, editing them, publishing them as regional bathymetry compilations, and conducting related analyses. He works with GEBCO, the General Bathymetric Chart of the Oceans, contributing to new seafloor maps of the Arctic, North Pacific, and the world for the Seabed 2030 project.

Mark received his MS degree from the University of Washington School of Aquatic and Fisheries Sciences and his BA degree in biology from Grinnell College.