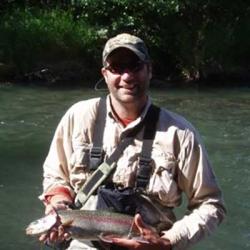 Mr. Keith joined NOAA Fisheries as a career federal employee in 2003 and has over 23 years of active military and civilian service.

He grew up in northern Vermont and enlisted in the U.S. Navy in 1992 right out of high school, and began working in the Navy’s nuclear power program, forward deployed to Italy on the USS Simon Lake AS-33. After discharge, Nathan received his BSc joint honours degree in Marine Biology and Zoology from the University of Wales, Bangor, UK in 2001. From there he worked as a fishery observer in Alaska and the east coast, before eventually starting his civilian service career with the Northeast Fisheries Science Center, in Woods Hole.

Nathan’s expertise and role at the NEFSC is very broad, but focuses on research vessel fleet management and technology advancements, and logistics and support. He provides oversight and management of the center's safety and environmental compliance program, property, and the R/V Gloria Michelle and associated officers, as well as the federal facility's large and small vessel berth use.

Nathan resides in Falmouth with his wife Kristen, and daughter Charlotte. In his spare time, he and his family enjoy spending time outdoors as much as possible hiking, skiing, fishing, boating, and spending time at their cabin in Vermont. Nathan is also an avid hunter and fly fisherman.