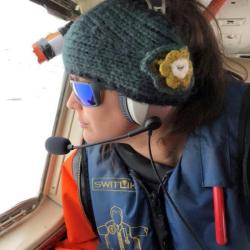 Nicole Brandt Turner is a biologist with Ocean Associates, Inc., joining the Aerial Surveys of Arctic Marine Mammals (ASAMM) project as a marine mammal observer for her first season. Outside of the field season Nicole works for the National Park Service as a marine wildlife specialist in a national office based in Colorado where she assists parks through technical assistance requests and by providing marine policy guidance. She is completing her Master’s degree at Colorado State University in Fish, Wildlife, and Conservation Biology.

Nicole began her career in Mexico in 2005, studying gray whales in their calving lagoons. Her first aerial observing position was in 2010 with Florida Fish and Wildlife Conservation Commission, documenting endangered North Atlantic right whales in the calving grounds off the southeastern U.S. She has continued to observe marine mammals and document their behavior from every platform imaginable - large and small boats, small airplanes and helicopters, rocky cliffs and sandy beaches, and behind the computer screen with the assistance of remote cameras - and logged hundreds of hours from the Atlantic to the Pacific.