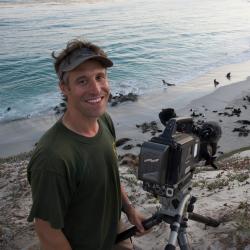 Paul’s undergrad is in biology and he transitioned into filmmaking because he loves diving into new scientific topics and stories. While pursuing an MFA in Science and Natural History Filmmaking, his first work with NOAA was in 2002 abroad the NOAA Ship McArthur, sailing from the Channel Islands to the Olympic Coast and producing short films about research in the National Marine Sanctuaries along the Pacific Coast. In 2005, he co-produced his thesis film with NOAA, which centered around the northern fur seal population on the remote Pribilof Islands. Since then Paul has produced education/outreach films for NOAA's National Ocean Service (2005–2010) and NOAA Fisheries (2010–2021). In 2021, he joined the Alaska Fisheries Science Center.

Paul is a NOAA Scientific Diver and small uncrewed aircraft systems pilot, and looks forward to showcasing the amazing work happening at AFSC in the years to come.