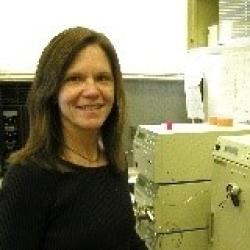 Penny Swanson started working part time as a physiologist at the Northwest Fisheries Science Center in 1990, and full time in 1992. She obtained her Bachelor of Arts degree in Zoology in 1978 from the University of Washington, Seattle and master's degree in Endocrinology and Reproductive Physiology in 1980 from the University of Wisconsin, Madison. From 1980-1982 she worked as a technician in the Aquaculture Research Laboratory at the University of Wisconsin, Madison, WI where she conducted research on growth and nutrition in freshwater fish species such as walleye and perch. She returned to the Univ. of Washington in 1982 where she obtained her Ph.D. in Zoology in 1986. The focus of her dissertation was the isolation and characterization of thyroid stimulating hormone from salmon. During that time she worked with scientists at the NWFSC who were studying smoltification in salmon, which is regulated by thyroid hormones. She continued research on the biochemistry and physiology of salmon pituitary hormones during postdoctoral studies at Kitasato University in Japan and subsequently as a postdoctoral fellow at the School of Fisheries, Univ. of Washington. From 1990 to 1994 research focused on basic studies of the function and regulation of pituitary gonadotropins in salmon, and development of methods to control spawning time in salmon. From 1994-1999, she was project leader of a multiagency Captive Broodstock Research Project, funded by the Bonneville Power Administration. In 1997, she became Team Leader of the Physiology Team in the Integrative Fish Biology Program in the REUT Division.

Penny Swanson's current research projects involve both basic and applied studies on the endocrine control of reproduction in fish, primarily salmon. Her main interests are the physiology of gonadotropins, mechanisms of puberty in fish, and how growth and environmental factors influence the age of sexual maturity. Under the Captive Broodstock Research Project funded by the Bonneville Power Administration and in collaboration with Brian Beckman, Briony Campbell and Karl Shearer, she is conducting research on how growth at various points of the life cycle influences the age of sexual maturation, fecundity, egg size and gamete viability. The goal of this research is to develop diets and growth regimes that allow for better control of the age of maturation in captively-reared fish. She is also investigating how rearing temperature influences the seasonal timing of spawning and trying to develop methods to advance spawning time in captively reared fish, which are delayed from wild fish. In collaboration with Jon Dickey and other scientists in Europe she is conducting molecular studies to better understand regulation of hormone receptors, such as gonadotropin-releasing hormone and gonadotropin receptors.