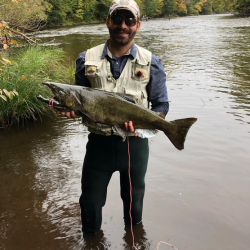 Ricky joined the NEFSC in March of 2013 as an Industry Funded Scallop Observer.  In 2016, after 3 years of observing and gaining more than 349 days at sea, Ricky transitioned to a fisheries data debriefer for NMFS. In October of 2020 Ricky joined the scallop team as the Scallop VCIC. Prior to joining the NEFSC Ricky worked as a carpentry foreman working on commercial and private projects.

Ricky received a Masters of Research from the University of Glasgow in Marine and Freshwater Ecology and Environmental Management, and he has earned a B.S. in Natural Systems Science at LeMoyne College.  In his spare time Ricky can be found spending it with his family, tinkering with engines, fishing or brewing.