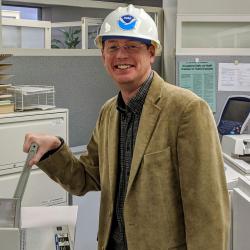 Seanbob received a Bachelor of Science degree in Fishery Science in 2005 and a Master of Science degree in Fisheries Oceanography in 2007 from the University of Alaska Fairbanks. After college, Seanbob was appointed a NOAA Knauss Marine Policy Fellowship with Sustainable Fisheries at NOAA headquarters in Silver Spring, MD. Seanbob began working for the NOAA Fisheries in 2008, followed by a position for the Sustainable Fisheries Division at Juneau, Alaska, in 2009. In 2015, Seanbob began working for the Habitat Conservation Division at Anchorage, Alaska. Seanbob's current job tasks entail EFH Consultations, Harbors and Dredging, and Oil Spill Response and Preparedness.