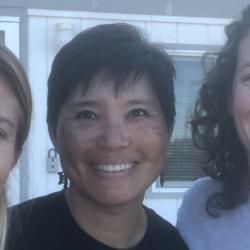 Shawn Murakawa is a biologist at NOAA’s Pacific Islands Fisheries Science Center. Her major responsibilities include leading remote nesting and in-water survey research at Rose Atoll in American Samoa, managing and leading the Age and Growth Laboratory, and conducting research on skeletochronological and stable isotope analyses to determine age, growth rates, and life stages of marine turtles. She has more than 25 years of experience in sea turtle research. In addition, Shawn has performed a wide variety of roles including SWPI IACUC Coordinator, Acting Management and Program Analyst overseeing administrative and budgetary functions for PSD, and Division Lead for Public Access to Research Results Committee.

Shawn was born and raised on the island of Oahu and earned a M.S. in Animal Sciences from the University of Hawai'i at Manoa. She is currently the PIFSC PSD and Sea Turtle Coordinator for the Hawaii Area Committee for Oil Response.