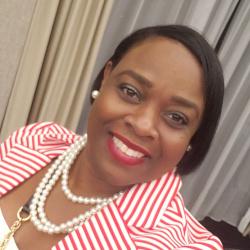 Chief of Staff to the Science and Research Director

Trika Gerard earned her doctoral and master degrees in Environmental Science from Florida Agricultural and Mechanical University in Tallahassee, FL. Her dissertation work investigated juvenile reef fish use of nursery habitats prior to ontogenetic shifts to coral reefs using otolith microchemistry. She also holds a Bachelor of Science degree in biology from Clark Atlanta University in Atlanta, GA. Trika’s research interests include larval fish ecology of coral reef fish as well as highly migratory species. Her work primarily occurs in the Gulf of Mexico, and extends out to the eastern and western Caribbean.

Trika received the NOAA’s educational partnership program graduate sciences fellowship in 2002, which led her to the Southeast Fisheries Science Center. In 2007, Trika joined SEFSC full time as a marine ecologist where she led research projects in early life history of fishes with particular focus on larval distribution and transport, food web dynamics influencing larval dispersal, otolith microstructure analysis, and recruitment connectivity. Trika also led an effort for processing plankton samples collected in response to the Deep Water Horizon (BP) oil spill of 2010. Throughout her career, Trika built numerous professional relationships within and outside of the NOAA Organization. Along with academic partners, she is currently the principal investigator for a 1.6 million dollar NOAA RESTORE Science Grant to evaluate the effects of nitrogen on habitat quality for Bluefin tuna larvae in the Gulf of Mexico. She serves as the Southern Region representative for the American Fisheries Society (Early Life History Section) as well as maintained a collaboration with international colleagues at the Spanish Institute of Oceanography to advance our knowledge of trophic ecology of Bluefin tuna larvae in the Gulf of Mexico and the Mediterranean. Most notably, Trika was a part of the group awarded the NOAA Administrator’s award in 2017 for executing the first larval fish survey around Cuba.