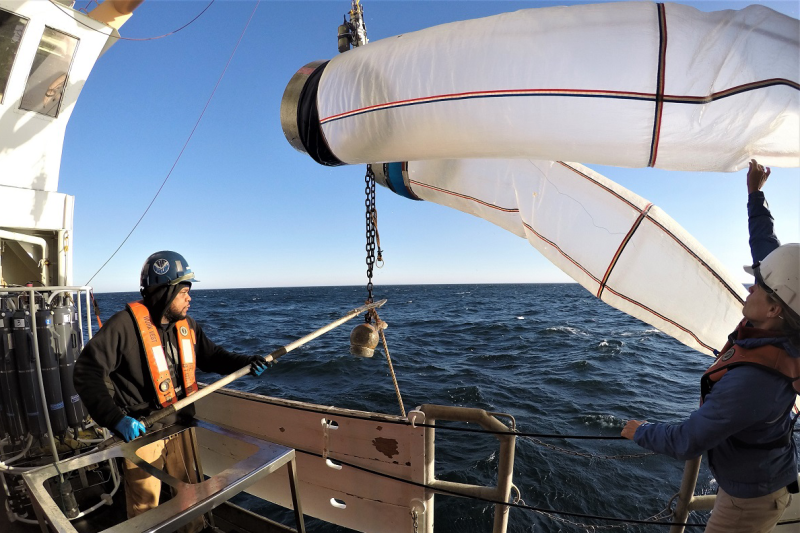 Thanks to a combination of favorable weather and a well-run vessel, the 2019 Northeast spring ecosystem monitoring survey aboard the NOAA Ship Henry B. Bigelow sampled at 139 stations, achieving nearly complete coverage of the Gulf of Maine, Georges Bank, and Southern New England waters. Fewer days were available for the cruise than originally planned, so the scientific crew reduced coverage in the Mid-Atlantic region and did not cover waters south of Delaware. They also added stations during the cruise to improve sampling resolution in specific areas. 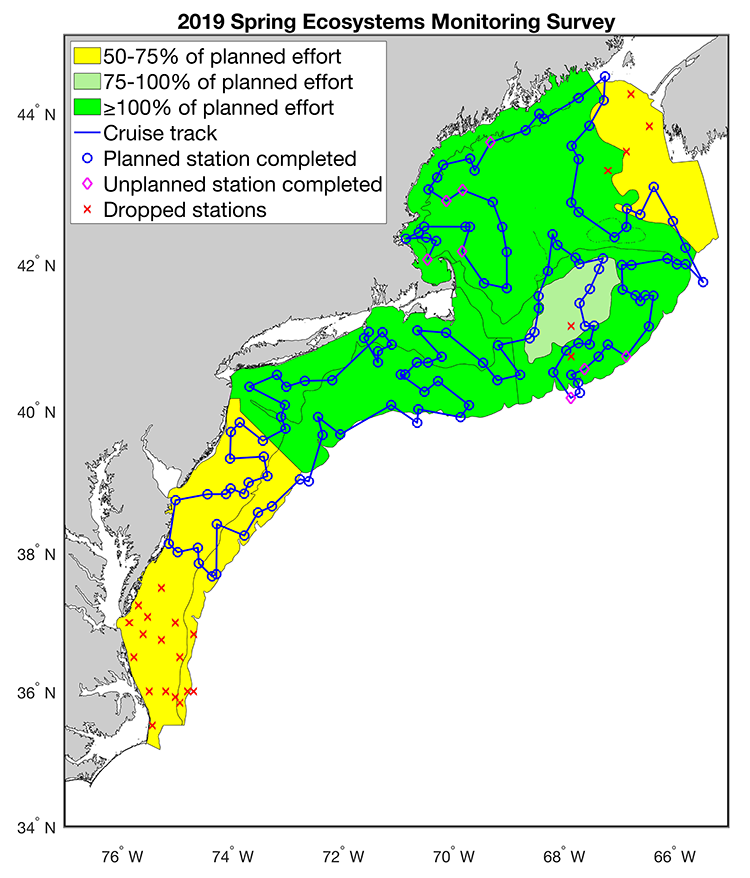 Together, the core measurements conducted by EcoMon cruises help researchers understand and predict changes in the Northeast ecosystem and its fisheries.

Researchers set out on the next EcoMon survey in August aboard the NOAA Ship Gordon Gunter. A more detailed report on the 2019 Spring Ecomon Cruise will be available soon.

The core long-term EcoMon sampling includes bongo net tows to collect zooplankton, larval fish and fish eggs. These fine-mesh nets get their name because they are attached to a steel ring side by side, which looks kind of like bongo drums. On this survey, bongo net tows were conducted at 123 different stations. Samples from this survey will be used in a newly developed index of Atlantic mackerel egg abundance, which is used in the stock assessment. To further support this effort, supplemental stations were added in the western Gulf of Maine. 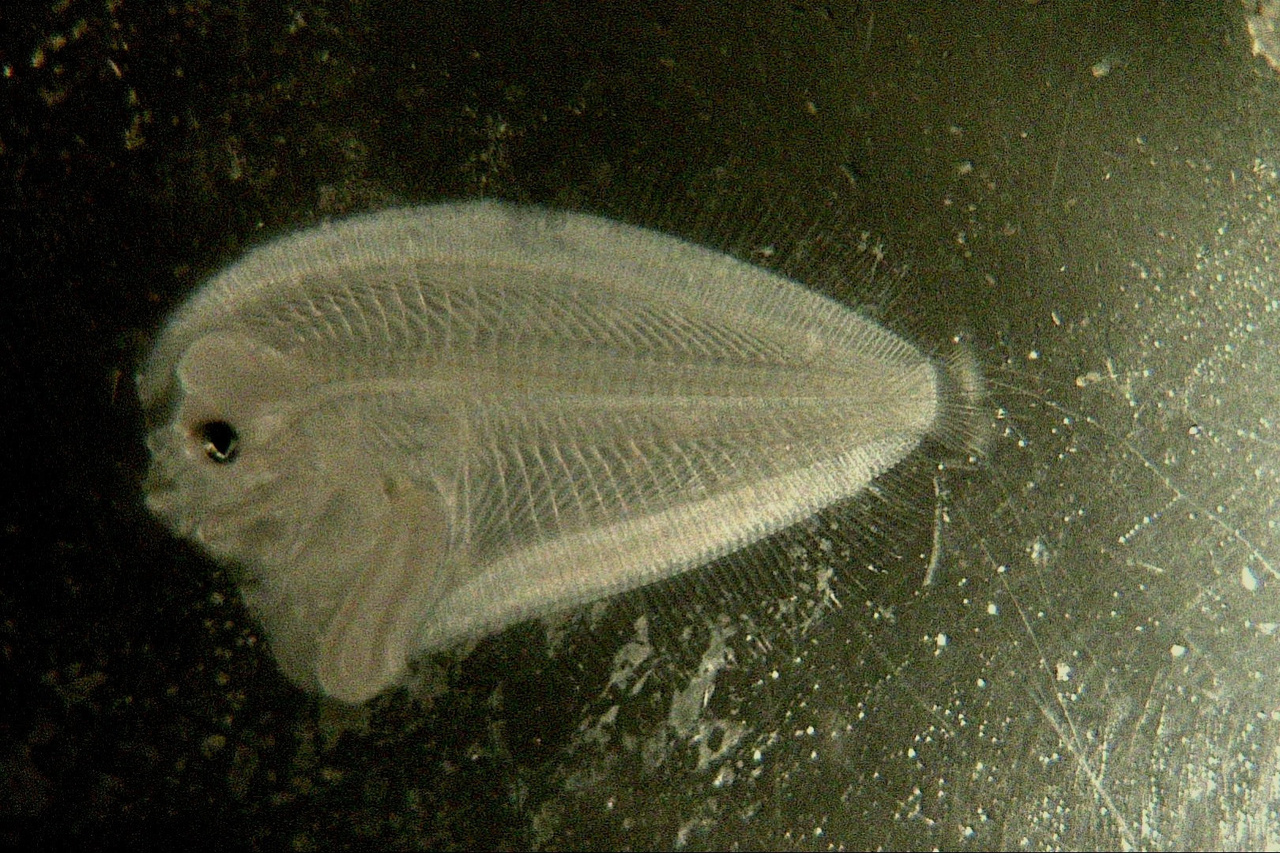 Seawater conducts electricity. This “conductivity” varies by depth and other oceanographic factors, and is used to estimate the salinity of seawater. The crew deployed an instrument that can measure conductivity, temperature, and depth—shortened to “CTD”—at all 139 stations on this survey. The combination of temperature and salinity at various depths helps define marine habitat boundaries, track ocean circulation, and monitor changes in climate. This can help explain changes in marine species distribution and productivity. 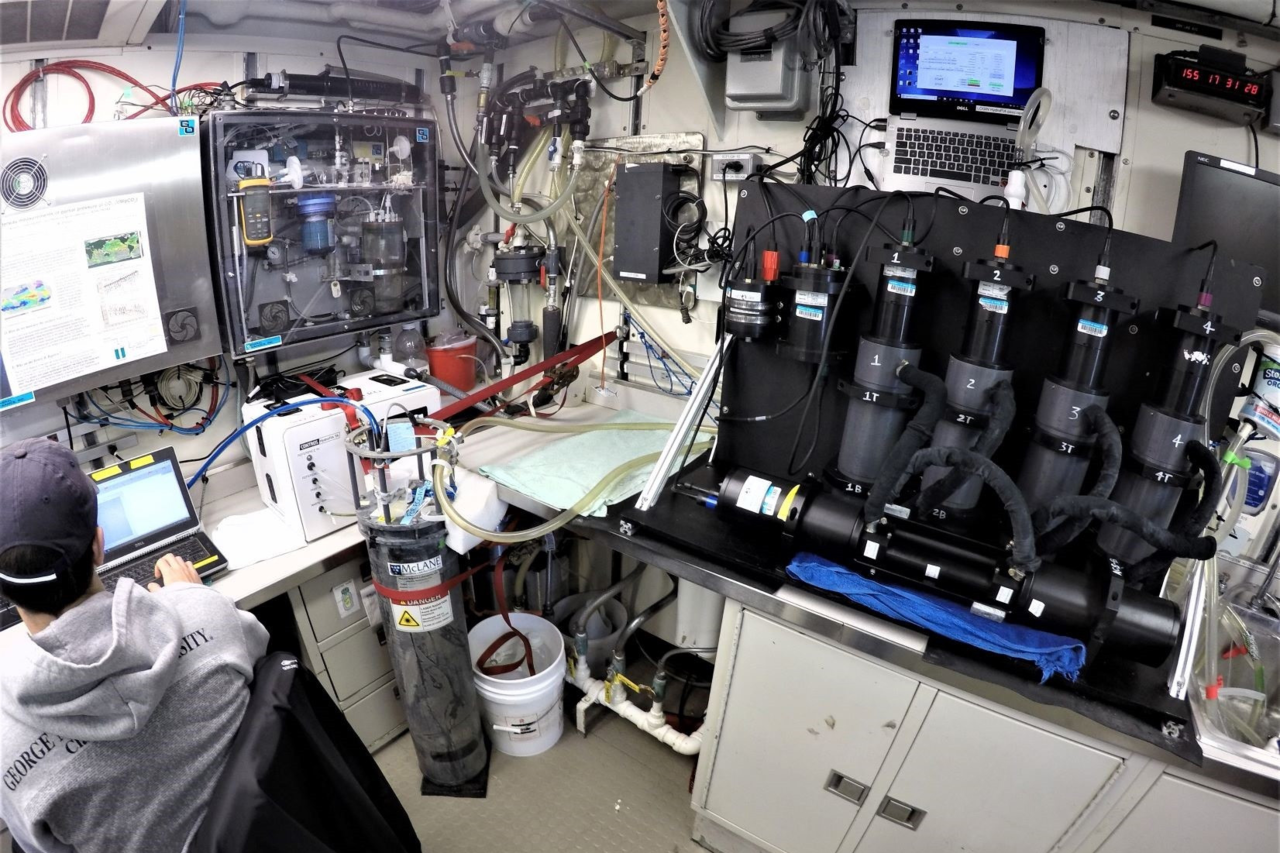 The scientific seawater analysis system on this cruise included sensors to measure carbon dioxide, total alkalinity, optical properties, and to record images of phytoplankton. All these data were gathered from surface water pumped into this shipboard lab continuously, along the entire cruise track. Photo: NOAA Fisheries

To monitor marine carbon cycling and ocean acidification, scientists collected water samples and measured dissolved inorganic carbon, total alkalinity, pH and nutrients. Increases in dissolved carbon dioxide can increase acidity of the water, which can in turn affect shellfish and other sensitive organisms. This sampling is funded by the NOAA Ocean Acidification Program and conducted in partnership with NOAA’s Atlantic Oceanographic and Meteorological Laboratory at the University of Miami.

The Northeast Fisheries Science Center’s EcoMon program collaborates with other agencies and institutions, supporting research that enhances core EcoMon sampling. The spring 2019 EcoMon cruise included sampling to support ongoing projects with the University of Rhode Island, the Woods Hole Oceanographic Institution, the Department of Fisheries and Oceans Canada, the Bureau of Ocean Energy Management, the U.S. Fish and Wildlife Service, and a variety of groups within NOAA. Specifically: