50 Years: Celebrating the History of the Southeast Region Headboat Survey

Looking back at the history of the Southeast Region Headboat Survey as we celebrate its 50th anniversary. 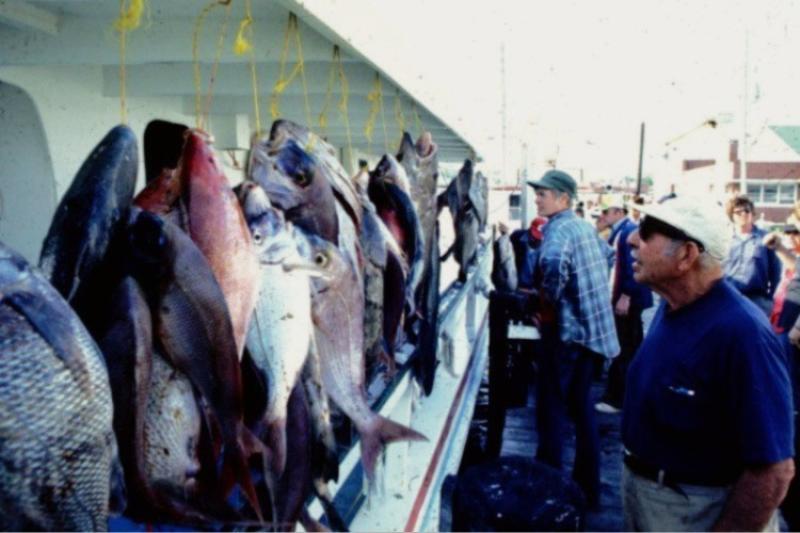 The catch from a headboat during the early days of the survey. Credit: NOAA Fisheries

Science 50 years ago—though much different than today—can be remembered as the origin of modern day molecular biology and the last time we sent people to the moon. Meanwhile, NOAA Fisheries had their own origin story in 1972. That was the start of NOAA’s Southeast Region Headboat Survey, based out of a NOAA facility in Beaufort, North Carolina. Initially the survey only covered the outer continental shelf (roughly 300 feet deep) off of North and South Carolina. It gradually spread south, reaching the Gulf of Mexico in 1986.

The survey continues to be the longest running saltwater recreational fishing survey in the Southeast Atlantic. We currently have an average of 140 vessels participating, split between the Southeast Atlantic and Gulf of Mexico. Several fishing operations have participated in the survey since its inception! This work is one of the main sources of recreational, fishery-dependent data. In some cases it’s the only supplier of life history data for more than 350 reef and pelagic fish species in our region. Information from the survey contributes to fisheries management through its role in the Southeast Data, Assessment, and Review stock assessment process.

Origins of the Survey

While the Carolinas may not seem like a hotspot for reef fish, the unique combination of physical conditions found there allow many reef fish to thrive. Dr. Gene Huntsman, a NOAA scientist at the time, was studying menhaden in Beaufort, North Carolina. Through this work he noticed the diverse fish species being brought back to shore in nearby Morehead City. Dr. Huntsman put together a team to study reef fish, followed quickly by the start of the headboat survey.

The continental shelf off of North and South Carolina may not have extensive tropical coral reefs like Florida and the Caribbean. But the hard bottom, warm temperature, and diverse invertebrates keep reef fish around in abundance. The area currently has 2–3 percent reef cover, which is relatively high for this latitude.

“Fishermen past and present see species such as, black sea bass, red snapper, vermillion snapper, grunts, porgies, and several grouper species,” explains Ken Brennan, chief of the Recreational Fisheries Monitoring Branch and coordinator of the survey. “These are all important fish species throughout the southeast United States. They are part of the snapper-grouper management complex, which has been a key group for the survey to monitor and provide data for management purposes.”

Over the last 50 years, fisheries have seen considerable technological changes that have contributed to the ability and efficiency to catch fish. Likewise, NOAA Fisheries continued to update methods to improve data collection. Today, our port agents use electronic measuring boards, scales, and computer tablets for dockside sampling. The Southeast Region Headboat Survey will continue to develop this essential data set, allowing long term changes and trends in fish stocks to be assessed and studied.

We look forward to the next 50 years!