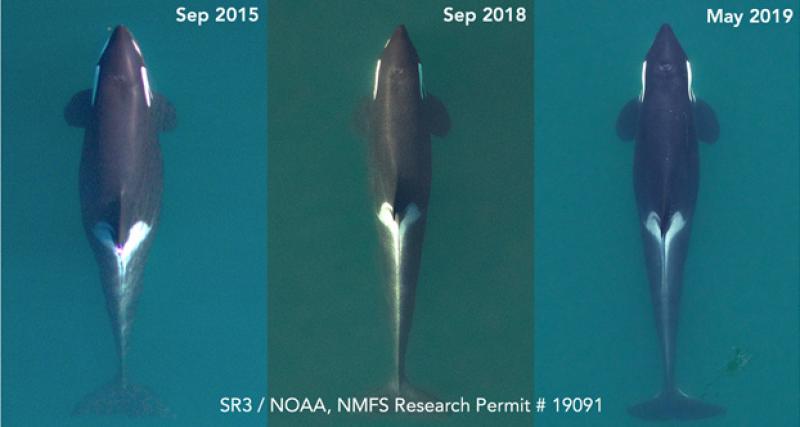 This spring the collaborative team used a drone, flown under permit at more than 100 feet above the whales, to collect new aerial images of Southern Resident killer whales in J-pod. These images showed that J17, an adult female that had deteriorated in body condition in recent years, has further declined since she was assessed last fall. J17’s three-and-a-half-year-old daughter, J53, has also declined in condition.

These scientists noted in images released last year that J17’s condition had deteriorated since giving birth to J53 in fall 2015. The new images collected last week show that J17 is now demonstrating the condition known as “peanut-head,” which indicates a significant loss of fat (or blubber) around the head. NOAA Fisheries and SR3 will continue to monitor J17 and J53’s condition, as well as all other individuals, throughout this summer.

The Northwest Fisheries Science Center will add to the aerial visual health assessments by collecting feces, breath and scraps of the whales’ prey when possible. Such samples provide information on the whales’ diet, potential pregnancies, and exposure to pathogens. Researchers believe that a variety of factors, including malnutrition, disease, and disturbance are impacting the population’s recovery. 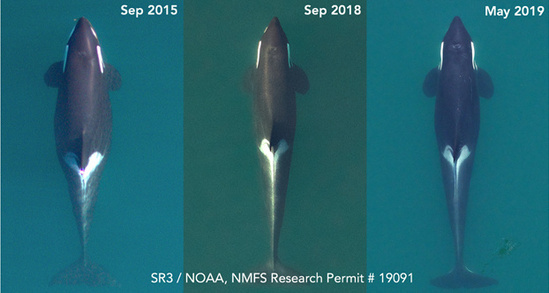 Aerial images of adult female Southern Resident killer whale “J17," displaying very poor body condition on May 6th 2019. Note the white eye patches that trace the outline of her skull due to a reduction in fat around the head. Her condition is contrasted to September 2018, when she was also very lean but had not yet developed such an obvious "peanut head", and to September 2015 when she was clearly pregnant (note width at mid body) and in peak recent condition. Images obtained by Holly Fearnbach (SR3) and John Durban (NOAA Fisheries’ Southwest Fisheries Science Center) using a remotely-piloted drone under NMFS Research Permit #19091.

J17 and J53 were last observed together and in the same area as other whales from J pod. NOAA Fisheries does not plan to intervene with J17 or J53 at this time but will continue to work with partners to gather additional information, evaluate options and consult with experts.

The public can help Southern Resident killer whales by giving them space to forage undisturbed and respecting the mandated state and federal viewing distances. NOAA Fisheries is also working with researchers to closely coordinate and limit their approaches around these whales. 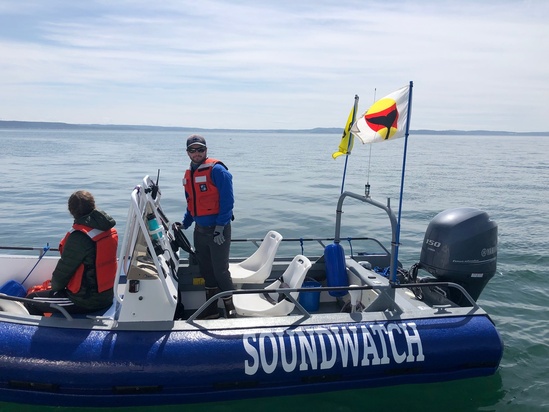 Washington Governor Jay Inslee last week signed a state law requiring all vessels to stay at least 300 yards from Southern Resident killer whales. The state law also requires vessels to stay at least 400 yards out of the path of or behind the whales, and slow to less than 7 knots within a half-mile of the whales. For reference on the water, 300 yards is about the length of three Washington state ferries.  Canada also announced a new approach distance of 400 meters (~437 yards) for killer whales, which will go into effect in June in Canadian waters. 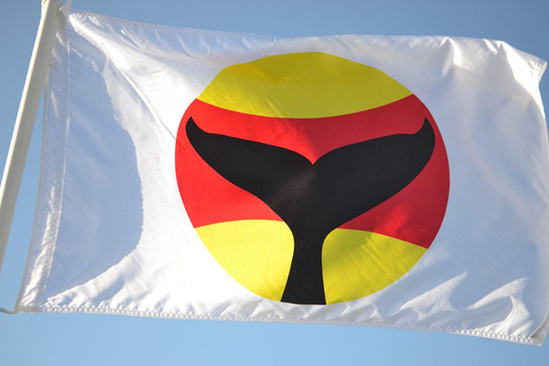 Whale warning flags flown by any vessel indicate that whales are in the area. The flag is a signal to slow below 7 knots, and watch for the whales, while keeping your distance and staying out of their path. BeWhaleWise.org has been updated with the latest state laws and federal regulations, and provides a ready reference for boaters. 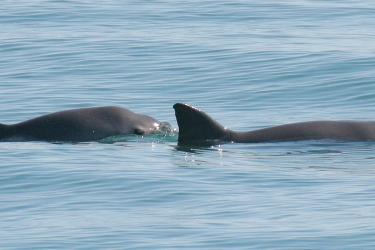