All Hands on Deck for a Wayward Gray Seal Pup 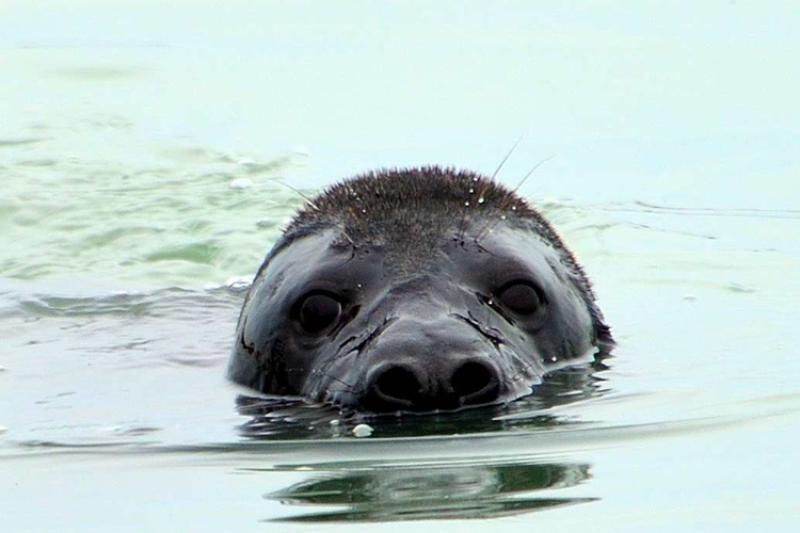 A young gray seal took an unexpected turn south this winter, visiting Hilton Head and Myrtle Beach and finally, St. Augustine, Florida. Gray seals in the Western Atlantic generally live in coastal areas from Canada to the northeastern United States. But every year, we encounter out-of-habitat seals. This year, in addition to this southern explorer, seals have been spotted in Albany and Bermuda. Usually, visiting seals find their way back without intervention. But sometimes, as with this male weanling gray seal, they need our help. 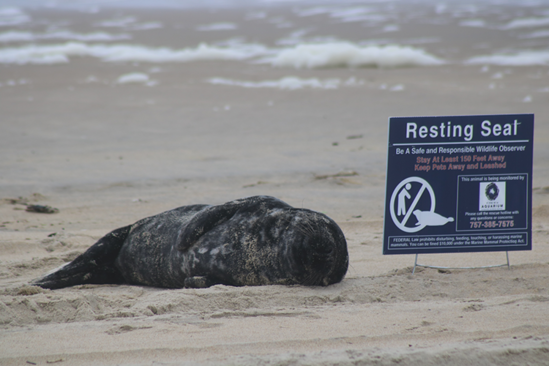 Our young gray seal’s story begins in Virginia Beach on February 28. Early that morning, the seal was reported to the Virginia Aquarium & Marine Science Center. After observing that the seal was lethargic and in a dangerous place, the Virginia Aquarium & Marine Science Center, collected the seal and performed diagnostic tests and treated it with fluids and antibiotics. They tagged the seal and, with help from The Nature Conservancy, released it on Sunday, March 3 at a known haul-out site with other seals.

The seal next turned up in Myrtle Beach on Wednesday, March 13 around 11 am. Local law enforcement made sure the seal had space, and it spent the day resting before heading back to the ocean on the morning of March 14. On March 19, the seal turned up in Hilton Head, South Carolina, where it again spent time resting, protected by barriers set up by the Sea Turtle Patrol.

“We kept hoping it would turn north on its own,” said Ainsley Smith, NOAA Fisheries Greater Atlantic Region’s acting marine mammal stranding coordinator. “We started discussing options when the seal was spotted in Hilton Head, and when the seal was seen in St. Augustine, Florida on March 21, it became clear that this seal was lost and needed help.”

They then transported the seal to Sea World Orlando. At Sea World, the seal was assessed and given fluids. 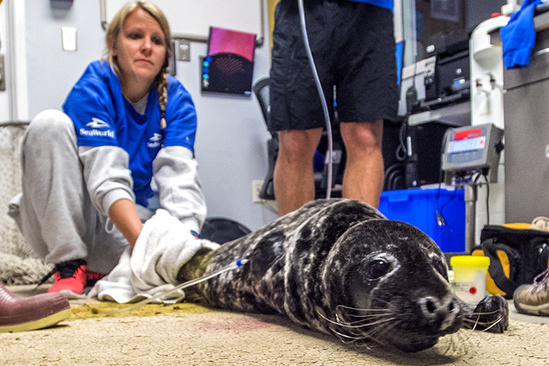 Then, Smith helped arrange its transport to the North Carolina State University College of Veterinary Medicine on March 22, where it received additional fluid therapy, and finally, to the National Aquarium in Baltimore on March 23. 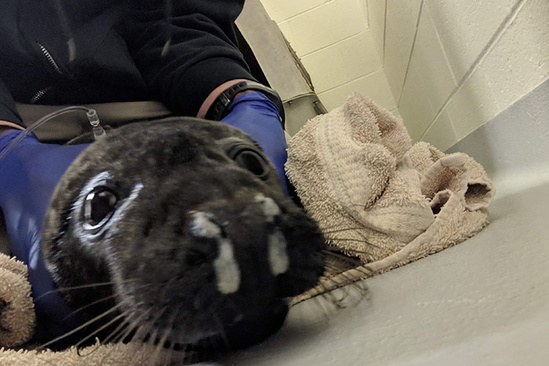 Stranded Animals Add to Our Understanding

“Stranded animals provide a window into the health and ecology of wild populations,” said Mark Swingle, Director of Research & Conservation for the Virginia Aquarium. “This little gray seal has provided a very unusual story to add to our understanding of the welfare and movements of seals in the most southern part of their range.”

Given the nickname "Edwin Hubble," in keeping with the National Aquarium’s scientist naming theme for rescued animals, the young seal is undergoing full diagnostics and treatment at the state-of-the-art Animal Care and Rescue Center. He is very underweight but does not show signs of any serious injury or illness. He is receiving oral fluid supplementation and has started eating fish on his own.

“The journey of this seal truly speaks to the importance and power of collaboration among the stranding network and the animal rescue organizations up and down the East Coast,” said National Aquarium Rehabilitation Manager Kate Shaffer. “We are happy to provide care for Edwin here in Baltimore as the next step in his journey and hope he will be swimming back into the ocean soon.” 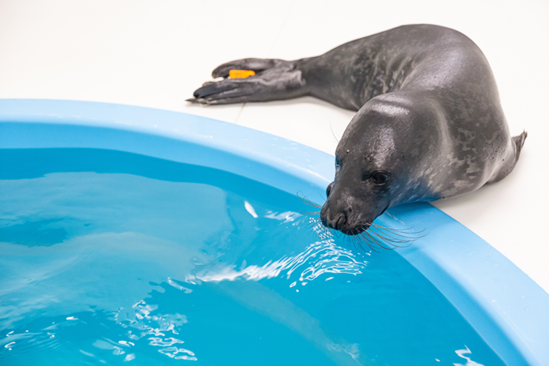 “We are thankful for the quick, collaborative efforts of the stranding network and all of the partners involved in this unique case,” said Smith.

Gray seals, like all marine mammals, are protected under the Marine Mammal Protection Act. In North America, their usual habitat ranges from Canada through the mid-Atlantic.

If you see a seal on the beach, please give it space. Resting on beaches is normal seal behavior. If you think a seal is in trouble, please contact us and trained marine mammal responder will check on the seal.

To report a stranded seal or other marine mammal please call (866) 755-6622 from Maine through Virginia, or (877) WHALE-HELP in the southeast and Gulf of Mexico. 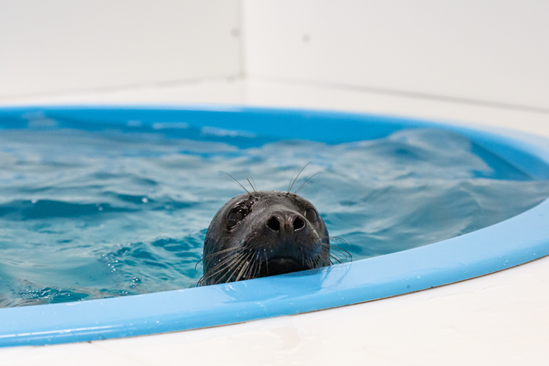