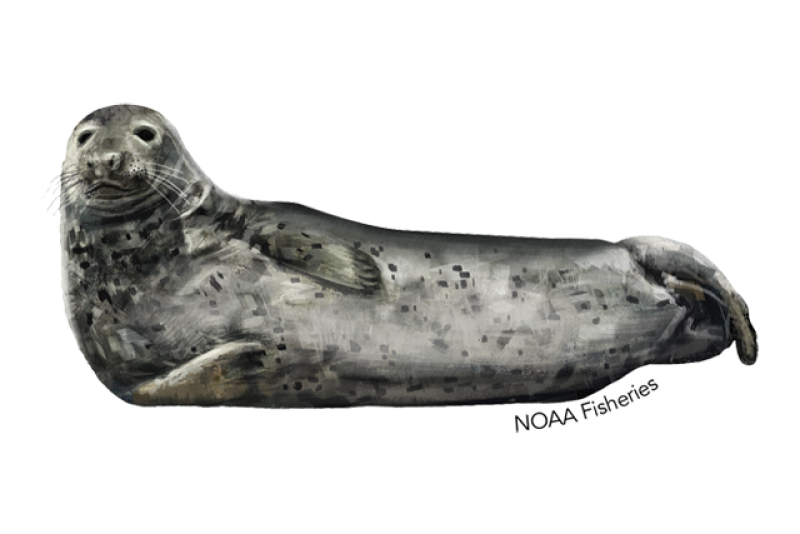 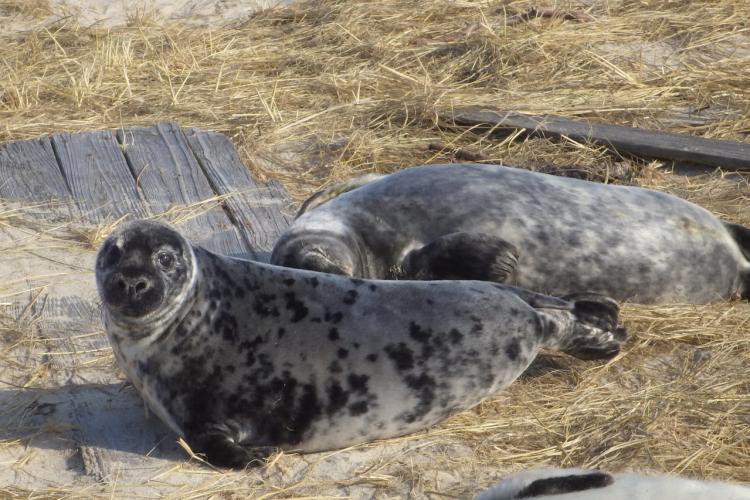 Gray seals are found in coastal waters throughout the North Atlantic Ocean. They are sometimes called "horseheads" (adult males in particular have large, horse-like heads) because of their large, curved noses. Gray seals gather in large groups during the mating/pupping and molting seasons. Outside of this, they often share their habitat with harbor seals. Gray seals, like all marine mammals, are protected under the Marine Mammal Protection Act. NOAA Fisheries is committed to conserving and protecting gray seals. Our scientists and partners use a variety of innovative techniques to study, learn more about, and protect this species.

In U.S. waters, there is one stock of gray seals, the western North Atlantic stock. There are roughly 450,000 gray seals in Canada and U.S. waters combined. More details about how stock abundance is calculated in Canada and the U.S. can be found in our stock assessment reports.

Gray seals are part of the "true” seal family. All true seals have short flippers, which they use to move in a “caterpillar”-like motion on land. They do not have external ear flaps. Adult female gray seals are about 7.5 feet long and weigh about 550 pounds, while adult males can reach 10 feet long and weigh about 880 pounds. Females have silver-gray or brown fur which may or may not have scattered dark spots, while males have dark gray or brown fur which may or may not have silver-gray spots. Males also have longer noses than females. The male nose is so distinctive that the gray seal’s scientific name, Halichoerus grypus, means "hooked-nosed pig of the sea." Gray seal pups have white fur known as lanugo. This white fur helps absorb sunlight and trap heat to keep the pups warm. The lanugo is also related to their evolutionary history with other ice-breeding seals. Gray seals breed on ice or sandy beaches in parts of Canada (Gulf of St. Lawrence, Sable Island, Nova Scotia) and on sandy or rocky beaches or islands in the U.S., and in parts of the Baltic Sea. Pups shed their lanugo when they are about 3 weeks old.

Gray seals gather in large groups during the mating/pupping and molting seasons. During the rest of the year, they can be found alone, in small groups or at large aggregations either on land or at sea. Gray seals can dive to 1,560 feet for as long as one hour. On average they can eat four to six percent of their body weight in food each day, but do not eat during the mating/pupping or molting seasons. Their excellent vision and hearing makes them effective hunters. They often hunt in groups, which makes it easier for them to catch their prey. They eat fish (mostly sand eels,hake, whiting, cod, haddock, pollock, and flatfish), crustaceans, squid, octopuses, and sometimes even seabirds. Their diet varies by age class, sex, season, and geographic region.

Gray seals are found across the North Atlantic ocean in coastal areas from mid-Atlantic to the Baltic Sea. There are three stocks of gray seals worldwide: the western North Atlantic stock (eastern Canada and the northeastern United States), the eastern North Atlantic stock (Great Britain, Iceland, Norway, Denmark, the Faroe Islands, and Russia), and the Baltic Sea stock. Gray seals can be found on rocky coasts, islands, sandbars, ice shelves, and icebergs. They share habitat with many other species and often live in the same areas as harbor seals.

Gray seals live for 25 to 35 years. They gather in large groups to mate. Males that breed on land can mate with many different females in a single breeding season. Females are pregnant for about 11 months and give birth to a single pup. Females in the eastern Atlantic Ocean give birth from September to November, while females in the western Atlantic Ocean give birth from December to February. Females in the Baltic give birth in March. At birth, newborn gray seals weigh about 35 pounds. They nurse on high-fat milk for about three weeks. During this time, they gain about three pounds per day and develop a thick blubber layer. Gray seal pups are very vocal. Their cries sometimes sound like a human baby crying. This is normal behavior that helps mothers find their pups on crowded beaches when they return to the shore from foraging. Moms don’t feed while nursing pups.

Gray seals can become entangled in fishing gear and other types of marine debris resulting in seals swimming off with the gear attached or becoming anchored. They can become entangled in many different fishing gear types including gillnets, trawls, purse seines, and weirs. Once entangled, seals may drown if they cannot reach the surface to breathe, or they may drag and swim with attached gear for long distances. This can ultimately result in fatigue, compromised feeding ability, or severe injury, which may lead to reduced reproductive success and death.

Gray seals are easy to view in the wild, but this puts them at higher risk of harassment and in some cases, even intentional human-related injuries and death. Feeding (or trying to feed) them is harmful and illegal. It changes their natural behaviors and makes them less wary of people and vessels. They learn to associate humans with an easy meal and change their natural hunting practices—for example, they take catch bait directly off fishing gear. Sometimes they fall victim to retaliation (such as shooting) by frustrated boaters and fishermen.

They may also be disturbed or harassed by the presence of humans and watercraft. Harassment is illegal and happens when any act of pursuit, torment, or annoyance might injure them or disrupt their behaviors. Remember to share the shore with gray seals for their safety and yours.

Contaminants enter ocean waters from many sources, including oil and gas development, wastewater discharges, urban runoff, and other industrial processes. Once in the environment, these substances move up the food chain and accumulate in predators near the top of the food chain such as gray seals. These contaminants accumulate in gray seals’ blubber stores, threatening their immune and reproductive systems.

Oil spills can harm gray seals. If exposed to oil, a gray seal’s fur can no longer repel water. This makes it difficult for the seal to swim, float, and keep warm. Inhaling or swallowing oil can also damage a seal’s respiratory, digestive, reproductive, and central nervous systems. Oil can also irritate or burn the seal’s skin.

Gray seals are susceptible to water vessel and land vehicle impacts. Inadvertent vessel strikes can injure or kill gray seals. Gray seals are vulnerable to vessel collisions throughout their range, but the risk is much higher in some coastal areas with heavy vessel traffic. Due to gray seal behavior, seals are also vulnerable to vehicles that drive on beaches, which is common in some areas of high gray seal density. Vehicular strikes are often fatal to seals, particularly pup or young seals that haul out high on the beach.

NOAA Fisheries is committed to the protection of gray seals. Targeted management actions taken to secure protections for these seals include:

Our research projects have discovered new aspects of gray seal biology, behavior, and ecology and have helped us better understand the challenges that all gray seals face. Our work includes: 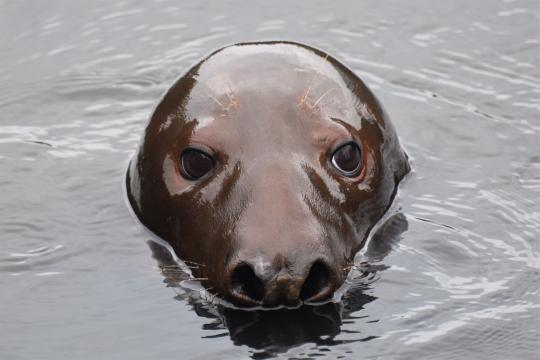 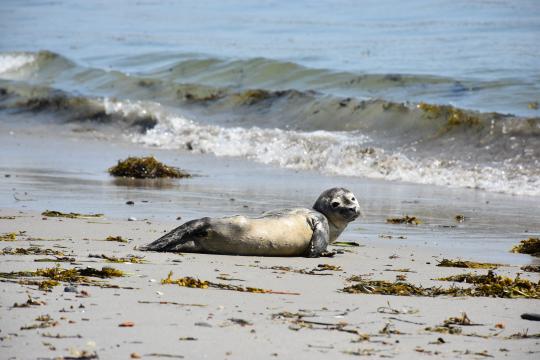 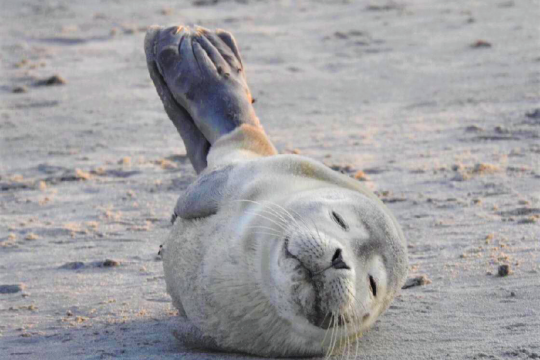 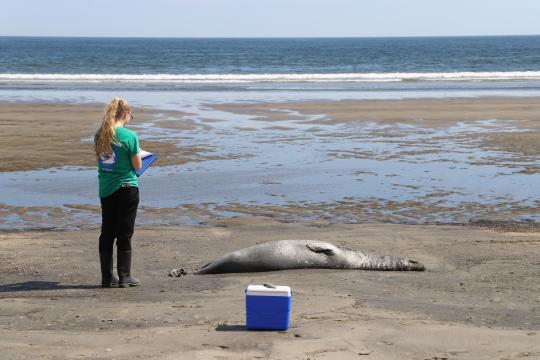 Gray seals, like all marine mammals in the United States, are protected under the Marine Mammal Protection Act.

All marine mammals, including gray seals, are protected in the United States under the Marine Mammal Protection Act (MMPA).

NOAA Fisheries conducts various research activities on the biology, behavior, and ecology of gray seals. The results of this research are used to inform management decisions for this species.

Scientists observe gray seals to record their numbers and distribution. By comparing numbers collected over multiple years, scientists can look for trends—i.e., whether the population is increasing, decreasing, or remaining stable during a given period.

We use photographs taken from the air to monitor gray seal populations in New England. We monitor the number of gray seal pups born on the following pupping colonies: Muskeget, Monomoy, Nomans Island, and Great Point in Nantucket Sound, as well as Seal, Green, Matinicus Rock, and Wooden Ball Islands off mid-coast Maine. As new colonies are established we add these sites to our monitoring plan. We use the pup counts to estimate the size of the total population.

Our scientists also track gray seals to study their movements and habitat use. This provides insight on where animals may be foraging, important haul-out or pupping areas, seasonal presence in Canada, relationship to predators like white sharks, and use of areas slated for wind energy or other resource development.

Our scientists study gray seal diet using a variety of methods to understand what and how much gray seals eat and where they are foraging, in order to better understand the role of seals in the ecosystem. This helps us better understand direct and indirect effects of seals on commercial and recreational fisheries as well as other important components of the marine food web. 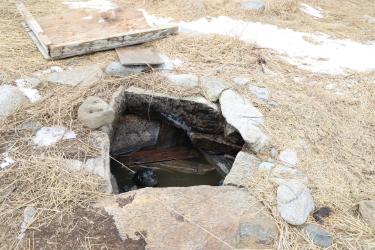 Going "Sealing" From The Gloria Michelle 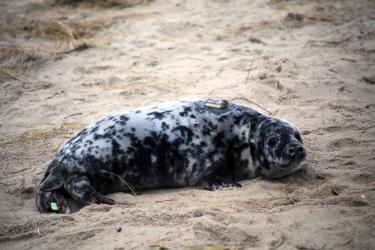