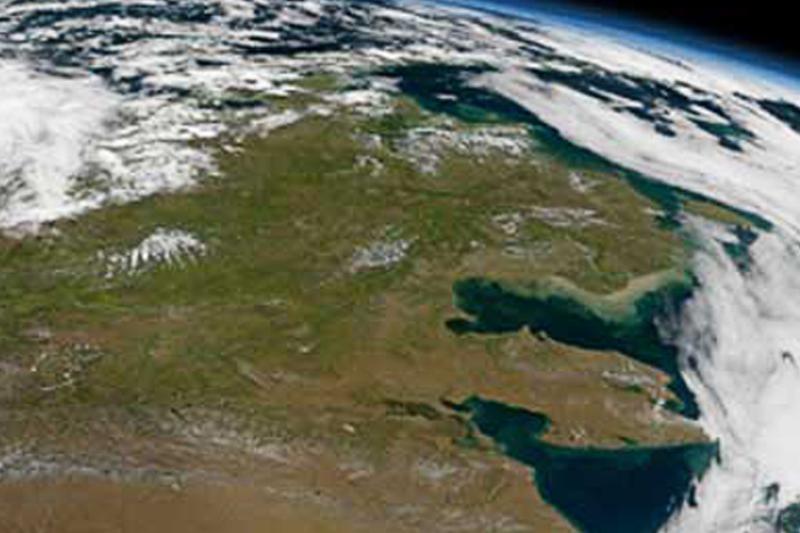 Looking southward from high over the Arctic Ocean, NASA's Aqua satellite reveals coastal phytoplankton blooms in the Chukchi Sea along northern Alaska (foreground) stretching into the Bering Strait in September 2006.

There is growing recognition that the Arctic is threatened by multiple human impacts including climate change and increased activities resulting from greater access due to retreating sea ice. Arctic sea ice cover has declined about 3% per decade over the satellite record (1979-present), with the six lowest annual sea ice minima occurring in the last 6 years (2007-12). The Alaska Arctic contains large petroleum reserves, and human activities related to energy extraction are expected to increase in the near future. Continued reduction in the extent of Arctic sea ice could improve access for the oil and shipping industries and has spurred interest in understanding what changes in sea ice coverage could mean for future Arctic fisheries.

The Alaska Arctic is presently home to several subsistence fisheries and marine mammal harvests. The development of new commercial fisheries in the Alaska Arctic is currently prohibited by the Arctic Fishery Management Plan until sufficient research has been conducted to allow for adequate evaluation of the ecological impact of commercial fishing. Thus, there is great need for the development of modeling and other decision-support tools that can synthesize existing knowledge of Arctic marine ecosystems and foster an improved understanding of ecosystem structure, function, and sensitivity to human activities.

In the following article we summarize some of the early findings of our mass balance food web model, which describes the key attributes of the eastern Chukchi Sea food web. Specifically, we examined the distribution of biomass throughout the food web and sought to identify important prey groups linking production of lower trophic levels to mammals and seabirds. We also evaluated mass flows, which describe the exchange of mass between groups in a food web, mediated by feeding interactions, to describe the relative significance of benthic and pelagic trophic pathways. Using the same food web modeling framework, we then focused on a set of network metrics to draw comparisons with nearby subarctic ecosystems—the eastern Bering Sea and Gulf of Alaska, and a more distant Arctic ecosystem, the Barents Sea.