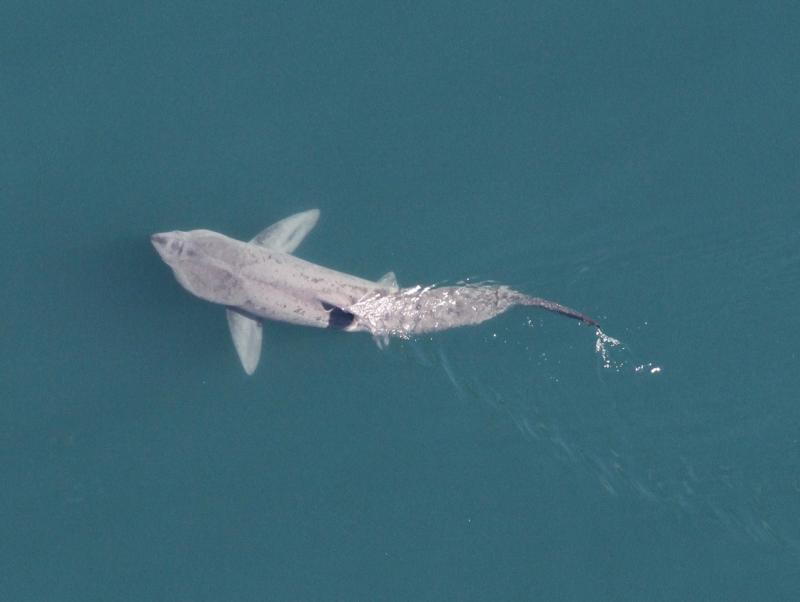 Groups of basking sharks ranging from as few as 30 to nearly 1,400 individual animals have been observed aggregating in waters from Nova Scotia to Long Island. While individual sightings are fairly common, seeing large groups is not.

The reason why the animals congregate has not been clearly determined, although it is thought to be related to feeding, socializing, and/or courtship given behaviors in other shark species.

In a recent study reported in the Journal of Fish Biology, researchers analyzed aggregations of basking sharks (Cetorhinus maximus) recorded off the northeastern United States coast to learn more about the phenomenon. Observations of these aggregation events are relatively rare. In almost 40 years of aerial surveys for right whales, ten large basking shark aggregation events were opportunistically recorded and photographed. Comparing this information with that collected in a number of earth-orbiting satellite and oceanographic databases and by the NEFSC’s ecosystem monitoring (EcoMon) cruises in the same region, researchers obtained more insight into this behavior.

“Aerial surveys provide a valuable perspective on aggregations and their potential functions, especially when coupled with environmental satellite and ship-based survey data,” said Leah Crowe, a protected species researcher at NOAA’s Northeast Fisheries Science Center and lead author of the study. The researchers found the aggregations occurred in summer and fall when sea surface temperatures ranged between 55 and 75 degrees F (13 to 24 degrees C). In the largest event, data were available to indicate there was a high concentration of zooplankton prey present.

Ten large aggregations of basking sharks were identified between June 1980 and November 2013, ranging from 36 to at least 1,398 animals within an 11.5-mile (18.5-kilometer) radius of the central point in the aggregation. Data on breaching, circular swimming movements, and/or apparent feeding behavior were recorded in seven of the ten largest aggregations.

The largest aggregation ever recorded on the aerial survey was at least 1,398 animals photographed on November 5, 2013 in southern New England waters. As luck would have it, the NEFSC’s EcoMon survey sampled the same area on November 16 and 17, 2013, providing an estimate of the zooplankton community characteristics in that area at that time of year.

“Photogrammetry, the use of photographs to measure objects, has provided estimated lengths of animals at the surface and allowed us to classify animals in the aggregation as likely juveniles or mature adults,” said Crowe, who works at the NEFSC's Woods Hole Laboratory in Woods Hole, Mass.

Given the apparent presence of juveniles and an abundance of zooplankton on the continental shelf at the time of the event, the study authors say it is likely foraging played a role in the formation of that aggregation. The study also suggests that the animals may be aggregating to draft off each other for more efficient feeding given the immense drag from having their mouths open.

Basking sharks are the world's second largest fish, growing as long as 32 feet and weighing more than five tons. They are highly migratory, slow-moving animals often sighted close to the surface with their large mouths open to filter zooplankton from seawater. They are considered passive and no danger to humans other than that posed by their large size and rough skin. They and the larger whale shark, along with the megamouth shark, are the three shark species that eat plankton.

Sighting surveys and environmental analyses from the study aligned with previous studies that found these large aggregations form in areas of high prey density, often along thermal fronts and in areas with high chlorophyll concentrations, perhaps exploiting spring and fall zooplankton blooms prior to the animals’ seasonal migration out of the region.  Data also confirm that basking sharks prefer waters between 55 and 68 degrees F (13 to 20 degrees C).

While these aggregations may provide the opportunity for socializing, courtship, and mating, some behaviors suggest they are not solely related to courtship as proposed in previous studies. The reproductive cycle of basking sharks is not well understood, and questions remain about why the animals gather in large groups and how they interact with each other when in them.

“Although the reason for these aggregations remains elusive, our ability to access a variety of survey data though the North Atlantic Right Whale Consortium Database and to compare information has provided new insight into the potential biological function of these rare events,” Crowe said. “The study also highlights the value of opportunistic data collection.”